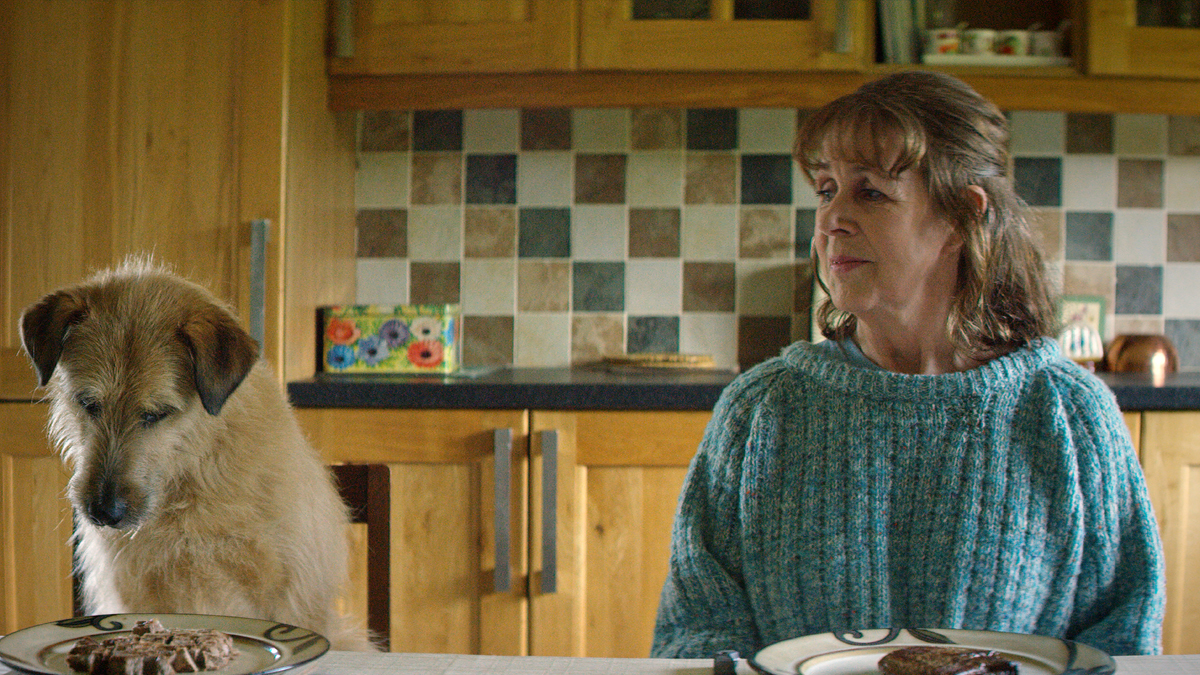 Director Rachael Moriarty talks about this up-lifting Irish tale Of recently widowed Róise, who is struggling in the aftermath of her husband Frank’s passing. But when a stray dog starts to follow her every move, a rejuvenated Róise starts to believe in the reincarnation of her husband and the power of enduring life in its next, hopeful steps.

Can you tell us what it was like between yourself and Peter Murphy (co-director)?
Where did it begin building that film and that story?
Peter and I were talking about loss and grief. We were talking about that belief or that thing that a lot of people in Ireland certainly would say that, you know, when somebody dies, that they see a robin in their garden.

There’s a feeling from nature that you know, it’s a time in life, when you see it, you feel in touch with something that is a bit more spiritual or cosmic. And we just started to kind of exploring the idea and thinking about, okay, we often hear those stories of you know, the robin comes back, and they get a message. So, we were thinking what if, you know, you kind of scaled that up, and was the one that was a returning animal that the person who had lost really, really did experience, a reincarnation as such, so we were trying to explore that theme of grief, loss and reconnection with the world. That’s where the story started, really.

What was it like building the relationship between Bríd and the dog? Who would play Frank? I can imagine there was a lot of difficulties and challenges with a dog.
Well, yeah, it’s funny Bríd was actually very good, because a lot of actors tend to think they have to bond with the animal actor and with but, canine actors do their own thing. They’re highly trained, they know exactly what they’re there for. Really, it’s the skill of the animal handler that really brings the performance. We’d rather intelligently focused on her performance, but she was smart enough to know that, you know, the animal actor is doing the work, it’s not necessarily wanting to bond with you. After all the dog is very focused on doing what the handler wants.

On the topic of the animal, was there a process to cast a particular dog? Were you looking for a particular look? Or was it literally just the most talented dog you could find?
Well, it’s a bit of both. To be honest, it was a very demanding role for an animal actor. We did look in Ireland, and we were put in touch with Gill in the UK, and she has a very large, I won’t say stable of animal actors.

We also wanted it to be a mixed breed of dog. We just felt that was kind of more believable for the Róise character to think of. I don’t know why we just thought, you know, a mixed breed. And that it had to have a face filled with character to have that believability and so we went to the UK. We flew over and met the dog and he was just perfect for it.

Gill who is the animal expert said because of the demanding work there was only one dog for the job. He’s an amazing dog. He’s a rescue dog.

He was just perfect for it. We were very lucky because, you know, we’ve been asked many times, what about working with animals and isn’t a pure pleasure? He was. He was an absolute professional.

Also, the film is As Gaelige. Was it always going to be or was that a decision down the line for yourselves?
No, we always wrote it As Gaeilge because it was a TG4 scheme, who were funding it and it was an original idea for that scheme. Also, we wanted to set it and shoot it in the Gaeltacht. We wanted it as authentic as possible. So that was always our vision for it. It was kind of tapping into the fact that lots of people are quite happy now to watch subtitled films. It’s all totally changed now to where we consume stuff from all over the world now. So that all timed well. No, it was a script written specifically for this scheme As Geailge.

What was it like working with Peter, on this story, you know, and working, you know, with the cast to bring this film to the world?
Peter and I have been co-writing and co-directing since college. So, we know each other very well. We know our process very well, that was smooth. So, we have written the thing together, we’ve had all the; why this, why that, we’ve had that all ready. So, we tend to come to set with an awful lot of stuff worked out. It is a real advantage because we were under quite a restricted shooting time.

So co-directing works quite well. And as you know, we had quite a large cast, we used quite a number of local actors. So, there was a lot of interaction to happen and to happen quickly on the day.

It kind of felt like nearly that old fashioned everybody getting together to make the film feeling because the people down in Ring were so bored with it. It’s the local kids, the local photographer, it’s the local school as well as the local hurling team. We went there because another reason that we wanted to go there was because kids there literally walk around with their camán around their arm. So, they are proper hurlers which would be a hard talent to teach an actor.

An awful lot of the film, kind of texture of it is from the place it was shot.

Róise & Frank is unapologetically Irish. Are you excited for people outside of Ireland to experience some of the culture of Ireland?
Yeah, it’s interesting.

It’s done very well at festivals in the US. Reactions, there have been certainly a very strong reaction to this theme of loss and grief. We have a lot of older audience members who want to come up to you afterwards in tears and they’re like, oh, you know, to connect with them. But the other thing that really seems to connect the audiences in America, you’re right, is that is that is that very, unpolished Irishness. They were enthralled. A few people said – Oh, they didn’t expect it to be so green and lush because the Waterford Gaeltacht is so green and lush as opposed to Connemara which is more rocks and sea and a different kind of Gaeltacht.

And they loved the hurling. They thought it was fun and great and all of that. They responded to both those things. But I think, Irishness aside they really responded to Bríd’s character.

I think a lot of us who have lost someone can relate to that wanting to cut yourself off from the world. How do you reconnect? All those themes, they are fairly universal.

A lot of people at the American screenings were asking us where is Waterford?

How was it winning the Santa Barbara Audience Choice Award? Because no one goes into making a film to win awards, especially in another country that’s quite foreign to what’s going on in our country.
No, you don’t you kind of you make a film that you hope that people enjoy it.

You don’t expect much more beyond that. You know, Santa Barbara, is a place that’s just North Hollywood, it’s an industry town. And so, it’s the, it’s the movie making industry, all over. There were a lot of stars coming up for events.

I just hoped people would enjoy it and then when we were there, a lot of people were coming up to us afterwards, and going how much they’d enjoyed it, and they were going to tell their friends, and then the organiser, told us that we’re going have to put on an extra screening at a bigger theatre, because we need to have, you know, so many people are asking about and want to see it. We were totally happy with that.

That’s amazing, incredible. We were delighted. What a great feeling. Then to win the audience award was, it was genuinely unexpected. It was amazing. It was absolutely mind blowing really. People really connected to the story; I suppose. We were chuffed. And that’s what happens, I guess it just seemed to work.

For me, I suppose it was the final scene that cemented the film’s quality. It was a surprising gut punch. I mean, I won’t say anything about it. But for you, was it always going to be the original ending? Was there any other kind of ideas of where the story should go? Or was that pretty much in your, in your heads about how you want the story to end?
We spent a lot of time thinking about the ending, we’d spent a lot of time thinking, should he just be back, of course, the ending is the thing that you kind of go repeatedly in your head and it came to us relatively quickly.

And once you have the ending in place you kind of know where you’re going. Now we did have to wonder what questions that leave? What does it make people think? Did it make you think it was Frank reincarnated or not Frank reincarnated?

We’re very happy if people have those conversations. I like going to a movie where afterwards I’m talking about it. Afterwards, I’m thinking, Oh, well, what about this? Or what about that?

It’s funny, because some people came up to me after the film and were like it was definitely him. Other people would say she just needed him isn’t that what happened, and I would say that’s open to your interpretation.

The official release is not far off now, how are you feeling knowing it is coming to Ireland?
Extremely excited.

It is funny, while older audiences have seen it, more so at festivals it is a film that you can bring your family to enjoy. Certainly, anyone who is a dog lover. I know a few people who are dog lovers who cannot wait to see it. So, it is a very, I think audiences are going to really enjoy the different aspects of it. I think it has got the layers to be an enjoyable experience. Also, I am hoping that the audiences here will like it as much as the US audiences did. It is a different thing because it’s a home crowd. I suppose I should say as well as well it is great to be part of that wave of Irish language cinema. That is a lovely thing to be part of. It feels great to be part of that.

And it’s lovely to think of Irish audiences having a different kind of Irish made film to look at as a cultural resource. I know a lot of people in Gaelscoileanna, who will bring their kids to this because it’s rare for them to get an Irish language film you can bring your family to.