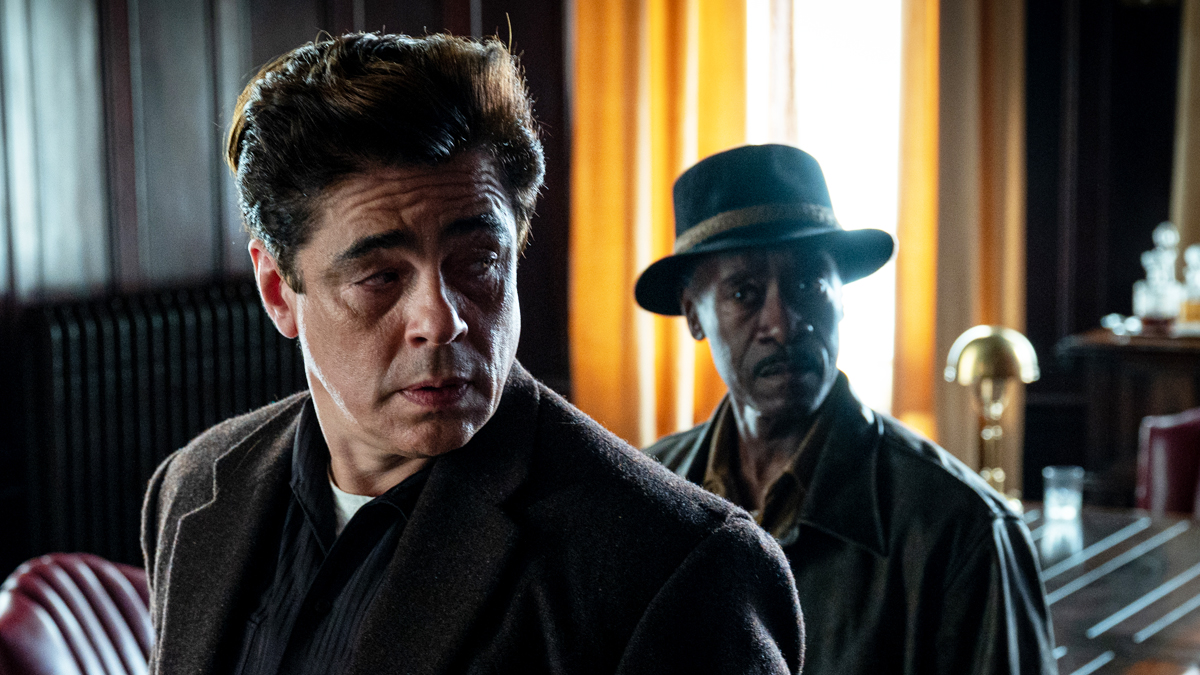 NO SUDDEN MOVE is available to own on Digital Download from 10th October.

How did you both develop your characters?
Don Cheadle: For me, it starts with the script; the script is the Bible. We had a great writer, Ed Solomon, and we were able to be in a collaborative process with him and Steven. Steven talked to me about a couple of years ago when he and Ed first started talking. He said I have this film that I want to centre around a character that I want you to play that is set in this period and set in this place, so I just started looking up Detroit and worked with the Detroit Historical Society in Detroit. It was a great resource. I gathered pictures and music, all of the things that help you start putting clothes on the character. You get to go to school every time we take on a role; as actors, we get to go back to school, and that’s fun if you like being a student.

Benicio del Toro: It is the same for me. It starts with the script, and then I might have some questions about my character, and I will go to the director, in this case, Steven, ask some questions, and try to see the best way to help tell the story.

You both worked with Steven Soderbergh before, but Don, in your case, you keep coming back? What is it about Soderbergh that makes you want to keep working with him, and after a certain amount of films, do you get a trophy or a medal with a Soderbergh stamp?
Don Cheadle:  I did! I should have brought it. I’m sorry I left it in my other room, it’s a big trophy! It seems weird, but you know I’m always gonna come back when Steven says, hey, let’s do something. We are developing a limited series right now, so he’s been a collaborator and a friend for a long time. And you keep coming back because you know it’s going to be different, interesting, and fun, and he gets you home early because he knows what he’s doing; he’s not out there, hunting and trying to figure everything out. He has an idea, he’s seen the movie in his head, and he knows what he’s trying to accomplish, but he still creates space for you to be a collaborator, and my experiences with Steven has always been his motto: best answer wins. So, if you come on set and you have a take on the scene that he didn’t see or take on even a scene you are not in, just any part of the movie that you are trying to make it better, he’ll try that out.

And Benicio, you worked with Soderberg at the start of your career; what is it like to come back now?
Benicio del Toro: I owe him so much. I wouldn’t be here without Steven Soderbergh. When he called me up, he told me a little bit about the character and the movie, and I said yes. I said I would do it. No, I hadn’t read the script, but there are some people that you just say yes, no matter what, rain or shine, and he’s one of them. The only difference was doing this movie during the pandemic that he was busy with something bigger than all of us, which was the virus. He did an incredible job, he created a bubble with the help of the production company, and no one got sick. We started the movie, we finished a movie against all odds and, we were able to work and, and we are very excited about how it worked out.

You guys have such chemistry. Did you have a lot of time to rehearse given the pandemic restrictions, or did the script bring that snappiness out?

Is it true that Steven had finished editing the movie at the same time as filming ended?
Don Cheadle: Every night, Steven was editing. On the last day, Stephen said do you want to see the movie? We were all at the bar where we were staying, we were in our bubble drinking and hanging out, and Steven is upstairs cutting, and then he’s finished it. It’s wild to have somebody that on top of it.

NO SUDDEN MOVE is available to own on Digital Download from 10th October.