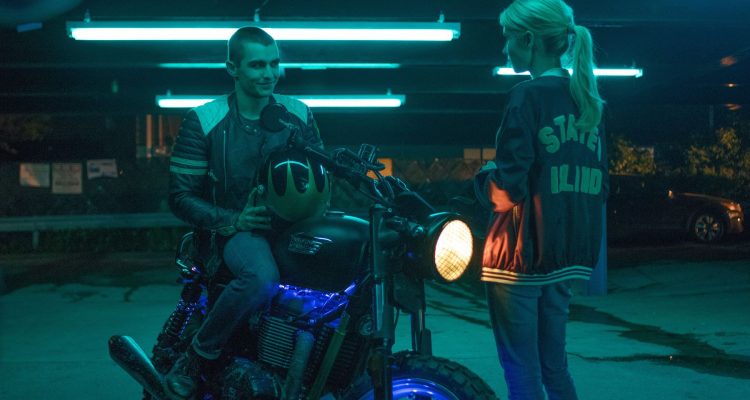 NERVE (USA/15A/16mins)
Directed by Henry Joost, Ariel Schulman. Starring Emma Roberts, Dave Franco, Emily Meade, Miles Heizer, Juliette Lewis.
THE PLOT: Staten Island resident and teenager Vee (Emma Roberts) has always been the safe, sensible girl. That is, until her friend Sydney (Emily Meade) introduces her to an online game called Nerve – a sort of truth or dare, without the emphasis squarely on the dare part. Players play for cash rewards by carrying out dares of increasing risk and ever-increasing rewards. Watchers comment and suggest these dares. Curious about the game, Vee watches at first but then proves to Sydney that she is willing to take risks. She becomes a player, with her first dare to kiss stranger Ian (Dave Franco). The watchers like the couple and send them off to Manhattan for the night. What begins as an innocent game of cheeky fun soon takes a turn into the sinister…
THE VERDICT: Adapted by Jessica Sharzer from the book by Jeanne Ryan, Nerve is reminiscent of recent online ‘games’ like happy slapping and Neknominate, which proved to have darker and more tragic real-world consequences. Nerve tries to distance itself from those references by setting up its world as a hip and fun place, inhabited by supposedly sensible young people who are drawn in by the cash rewards and instant fame that the game brings with it.
It starts innocently enough, with dares like trying on expensive dresses and leaving the store half-naked. Then it gets a bit risky, to the point where it becomes less of a cautionary tale and more of a mash-up between other films like ‘Saw’ (soon to be resurrected), ‘My Little Eye’ and even ‘The Purge’. That was presumably not the intention of co-directors Henry Joost and Ariel Schulman, who have form in the darker side of the Internet with the original Catfish documentary. They set out to make an original film but ended up with something all too familiar.
However, for most of the running time, it’s a film that feels reasonably entertaining and, at times, gripping. Watch the sequence where Sydney tries to walk across a suspended ladder through your fingers, or a sequence involving a motorcycle zipping through the Manhattan streets. Roberts and Franco make an attractive and sparky couple, their on-the-go chemistry developing as their antics get ever more colourful. Lewis is wasted though in a basic, bland mother role that belies her talent.
Just when you think that the film might really have the nerve to follow through on its dark agenda, it cops out with a conventional ending that just does not ring true. Character loyalties shift jarringly, to the point where this reviewer felt tricked. Was it all just a game? Joost and Schulman duly slip on the banana peel and blow the ending, but it is not enough to derail the whole film. It still manages to be engaging and free-spirited, with a dash of youthful exuberance. For what it’s worth, being a watcher on Nerve is light fun – but you are unlikely to remember it next week.
RATING: 3/5
Review by Gareth O’Connor