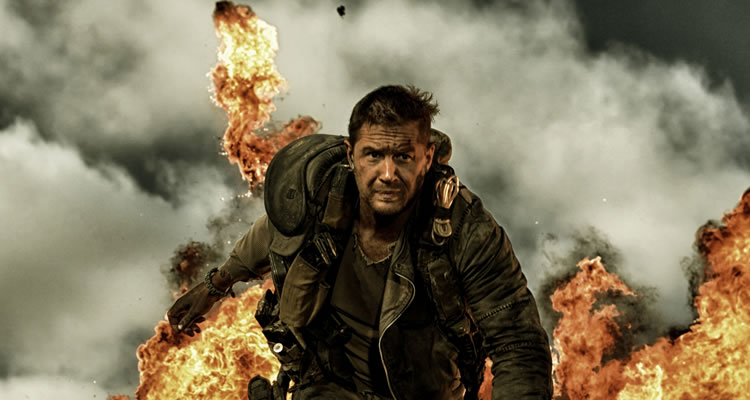 THE PLOT: For ex-cop turned post-apocalyptic road warrior Max Rockatansky (Hardy), it’s still the end of the world, but not quite as we know it from before. Most of it is familiar – the sunburnt desert scapes, the vamped up, customised vehicles constantly engaged in battle over fuel, glorious fuel, and the designer gimps who drive them. Hitting the ground running, literally, Max is captured by a white-bodypainted tribe who worship their ancient, half-decrepit old leader, Immortan Joe (Keays-Byrne), a cross between Jabba The Hut and L. Ron Hubbard. Joe keeps his tribe happy with promises of everlasting life in Valhalla, whilst the great unwashed down below are kept in line by rousing speeches followed by bursts of precious water.

When Joe’s beautiful young breeders (Huntington-Whiteley, Kravitz, etc) are whisked away by Imperator Furiosa, he soon has a rabid, high-speed convoy hot on the traitor’s tail. Amongst them, our hero, Max, the ailing Joe worshipper Nux (Hoult) having not yet finished their little blood transfusion.

And so, to battle, in the great wide open, where loose cars and fast women are the supreme prize…

THE VERDICT: With a script that I’m convinced was ghost-written by my Grand Theft Auto-loving young nephew Thomas, Fury Road might as well have been called The Fast & The Fraggle Rock. Bigger, brighter, bolder and decidedly more bonkers than the previous three outings – including the last, 1985’s bombastic Mad Max Beyond Thunderdome – creator and writer/director/producer George Miller unleashes a Bosch-esque hell-on-wheels for this deliriously twisted thrill-ride.

With the man behind Babe 2: Pig In The City and the deceptively-titled Happy Feet at the helm, there was always going to be something troubled and tortured just beneath the shiny, multiplex-baiting surface here. An endless number of unsuspecting kids ended up with a stutter after the bleak Babe 2, whilst the Happy Feet franchise can be summed up in one telling image – namely, a despondent penguin banging his head against a zoo enclosure wall. Sweet dreams, children.

Here, the underlying message is all about man’s inhumanity to women. Especially when they’re hot (the girls here constantly look like they’re on a Pirelli calender shoot). Beyond Hardy and Hoult’s elligible and agile heroes, pretty much all the major male roles here are grotesques, the tribe leaders all coming across as Noah Cross meets Harvey Weinstein, each using his power to keep beautiful women under their club foot. Oh, and having explored how we have all become slaves to oil in those early Mad Max outings, here, Miller has now added water, and how this natural, necessary resource is slowly becoming a lucrative commodity. Hurrah!

The early reviews, largely written in a panic to be first out of the gate, have been pretty ecstatic, but there was something a bit too washed-up Wachowski about this long-awaited sequel for me. All style over grit, CGI OTT over any kind of character TLC. Former box-office queen Theron is no Weaver, and Hardy hardly brings anything new to the role (the Bane mask doesn’t help), with only Hoult truly holding his own. Which is a shame, because I feckin’ loved Mad Max 2: The Road Warrior. RATING: 3.5/5