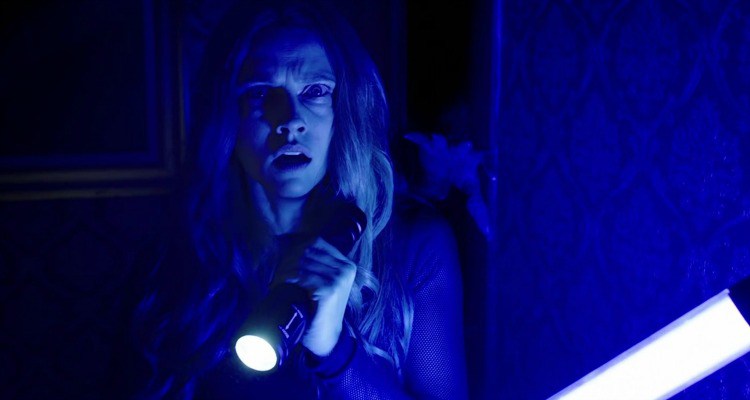 LIGHTS OUT (USA/15A/81mins)
Directed by David F. Sandberg. Starring Teresa Palmer, Maria Bello, Billy Burke, Gabriel Bateman, Alexander DiPersia.
THE PLOT: After her little brother Martin (Gabriel Bateman) reports experiencing the same terrifying events that pushed her to leave home, Rebecca (Teresa Palmer) returns to deal with the mysterious entity, which seems to have an attachment to her mother.
THE VERDICT: ‘Lights Out’ is based on a short film that director David F. Sandberg published online in 2013. A rather simple horror flick, Lights Out is surprisingly accomplished, and has plenty of scares, although it struggles with expository dialogue and plotholes that take too long to be filled in.
Teresa Palmer, Gabriel Bateman, Alexander DiPersia, Billy Burke and Maria Bello make up the cast of the film, and they fit into the standard stereotypical roles in a horror movie; the victim, the terrified child, the brave one, the boyfriend and the one who dies too quickly. Each of them do fine with their character, never managing to make them anything spectacular, but showing they are capable of carrying the jumps and scares in the film.
Screenwriter Eric Heisserer adapted the screenplay from David F. Sandberg’s short film of the same name, and makes sure that the fear and the jumps begin right at the start of the film. There are enough lulls in the action to make sure the audience can catch their breath before the tension ramps up again. There are problems with the dialogue from time to time however, as much of the exposition happens through awkward conversation. As well as this, there are times when the film feels as though it is riddled with plotholes, and when these are eventually filled in, it is too little too late.
As director, David F. Sandberg keeps the action going throughout, but seems more interested in the scares than the story, which leads to some very talky scenes that kill the atmosphere. The jumps and scares are good, and the monster is well created and carefully wrapped into the actions of the characters, but the story could have been told in a more interesting and engaging manner.
In all, ‘Lights Out’ is a decent enough horror with plenty of scares, the premise feels novel and is well created, but the dialogue is often clunky and issues with the plot are skimmed over. Still, there are jumps and starts throughout, and the sequel is bound to sort out the issues with this film.
RATING: 2.5/5
Review by Brogen Hayes