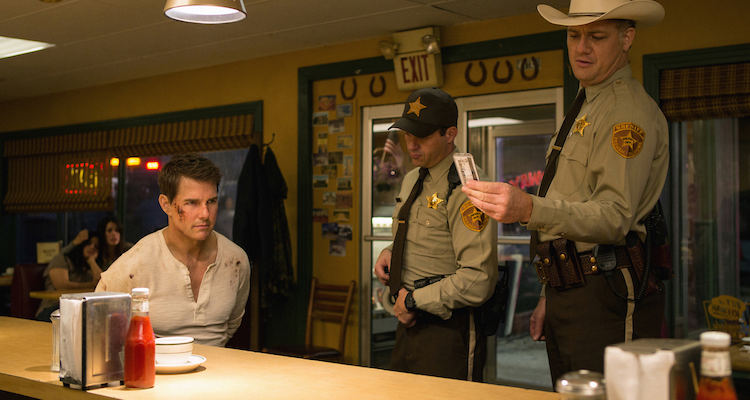 JACK REACHER: NEVER GO BACK (China | USA/12A/118mins)
Directed by Edward Zwick. Starring Tom Cruise, Cobie Smulders, Robert Knepper, Danika Yarosh, Aldis Hodge
THE PLOT: Jack Reacher (Tom Cruise) works as a vigilante on his own terms, seeking out the bad guys and taking them down, often with the help of Majrot Susan Turner (Cobie Smulders). When Reacher returns to Washington DC in the hopes of finally meeting Turner, he discovers that she has been relieved of her command and arrested for selling secrets. While trying to get to the bottom of this elaborate story, Reacher discovers he has a 15-year-old daughter who finds herself drawn into trouble when the bad guys come after him.
THE VERDICT: Four years after the first ‘Jack Reacher’ film brought us the sinister genius of Werner Herzog as The Zec, Tom Cruise brings another one of his action movie characters back to the screen. Without Herzog and a clear script, however, this sequel feels unnecessary and rather boring.
Tom Cruise leads the cast as Jack Reacher, a man who believes in what is “right” – seemingly only in his own eyes – and someone who the audience learns nothing more about. This makes Reacher a character who is very hard to root for, engage with and spend time with. The same goes for Cobie Smulders playing a slightly altered version of her Marvel character Maria Hill, and Danika Yarosh, who plays Samantha, the girl who may or may not be Reacher’s daughter. The rest of the cast features Robert Knepper, Aldis Hodge and Holt McCallany.
The screenplay, written by Edward Zwick, Richard Wenk and Marshall Herskovitz, is based on the 18th of Lee Child’s Jack Reacher novels. The story is rather uninteresting, and often leaves the audience wondering why Reacher inserts himself into situations that don’t concern him. As well as this, the attempt to make the story a conspiracy at high levels of government and the army does not work as it is far too complicated and messy, and the characters are never fleshed out enough for the audience to care about what they are doing and why.
As director Edward Zwick never manages to sort out the pacing of ‘Jack Reacher: Never Go Back’, which means it feels flabby and drawn out in the middle, and not even a decent set piece or two can make up for this. In fact, the set pieces themselves even feel drawn out and rambling, and almost everything that happens has been foreshadowed to some extent earlier film.
In all, there is nothing original or special about ‘Jack Reacher: Never Go Back’, and the garbled story is not gripping enough for the audience to care about characters that we know very little about.
RATING: 2/5
Review by Brogen Hayes