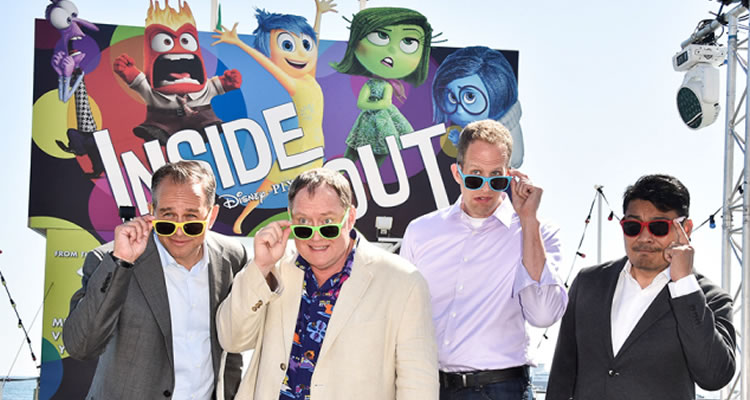 Joy, Sadness, Fear, Anger and Disgust… it sounds like a night out with the Movies.ie team but no, they’re all characters from ‘Inside Out’, the new movie from Disney/Pixar. The film has one of the most unique concepts in years, five different emotions live inside the mind of Riley a young girl and help guide her through a difficult period in her life. The emotions are played by some of the hottest actors right now including Mindy Kaling (Disgust), Bill Hader (Fear) & Amy Poehler (Joy). ‘Inside Out’ is directed by Pete Docter, the man who gave us two of the best animated movies of modern day cinema ‘Monsters Inc’ and ‘Up’… so no pressure!

We met up with Pete Docter and producer Jonas Riviera at the world premiere of ‘Inside Out’ in Cannes for a chat about the most original thing you’ll see this year.

The idea of emotions working away inside a girl’s head works so well on screen, where did the concept come from?
Pete Docter: It came from watching my daughter, who was about 11 when we started, she was very rambunctious and full of energy, then as she got a little older – the teenage years – she got a little more cool and slowed down. So it was really about watching her, and remembering my own childhood and trying to explore a little bit about what it is to grow up. The whole idea of using emotions as characters was really a fun one. Jonas said ‘Man, if we do this right, this could be our version of the Seven Dwarves’, which people still watch to this day. You think of Grumpy, you think of that character. That was out challenge we set for ourselves; to try to represent these feelings that are very abstract and airy-fairy, and we were trying to make them concrete and gettable physical characters.

How do you go about casting characters like Joy, Sadness, Fear, Anger and Disgust?
Jonas Riviera: That was a fun part. Even before we cast… Pete had written up a list of what they’re like, character descriptions, and even old characters in movies that they might be like. We just started reading that in aggregate and thinking about who’s out there that fits ‘the suit’ as we say.
PD: Interestingly, we had designed all the characters first, so well before we cast them we had a physical representation. Then what we would do was grab little snippets of audio, of dialogue, from films and shows that they had been in, and just play them and look at the character and go ‘Yeah that sounds like that voice comes out of there’.
JR: Like Disgust – Mindy Kaling – we told her the character was disgusted not disgusting; she’s lovely, but she’s judgemental. Mindy was like ‘Oh that’s what I do’ [laughs]

There are so many great jokes in the film – like the ad jingle that keeps recurring – where did that come from?
PD: That was just a gag that came out of writing, but it’s again, based on real life. Those are the kinds of things – they do that on purpose, obviously, in the advertising business, you try to make it sticky – so we tried to conjure that up. I know that’s definitely true of me; if I start humming any number of product themes it’s going to be stuck there all day.

What do you hope audiences take from the film?
PD: Well, we always hope that they are, first and foremost, entertained, and they have a great time. Given this concept, it felt like from the beginning we had an opportunity to explore things, not only for humour, but also for heart, and maybe cause people to think a little bit more about the way they operate; the way we think, and the way we interact with each other. That’s pretty heady – hah!
JR: …No but that’s right. We have this chance to make something and put it out into the world and we hope that it’s fun, but it also stays with you in some way. I hope it does that emotionally. It’s a story about the struggle to grow up, and that’s something that resonates to us and, I think, to a lot of people.

What’s next from Pixar Studios?
PD: This Autumn we have ‘The Good Dinosaur’ coming out. That’s a first for us at Pixar, to have two feature films in one year. That’ll be really cool. The film is looking absolutely fantastic. I think there’s more going on at work now than there has been in a long, long time.
JR: Yeah there are six or seven films in various stages of development and production…
PD: We get to help out and watch all the rest of them as we all try to help each other as we go. We’re hoping to kick up another one. Let me pitch it to you!
JR: It’s about two guys who live in Cannes! We’ll have to do a ton of research!
PD: I like your thinkin’! [laughs]

INSIDE OUT is at Irish cinemas from July 24th