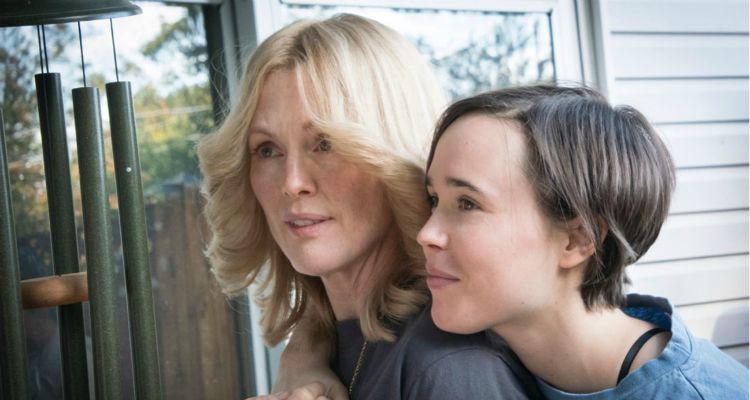 FREEHELD (USA/12A/103mins)
Directed by Peter Sollett. Starring Julianne Moore, Ellen Page, Michael Shannon, Steve Carell.
THE PLOT: When New Jersey police detective Laurel Hester (Julianne Moore) is diagnosed with terminal cancer she is determined for her pension to go to her partner Stacie (Ellen Page), so she can afford to stay in the home they shared together. The trouble is that while domestic partnership is legal, they have to campaign the Freeholders of their home county to grant Laurel’s dying wish, a wish they are none too keen to agree with.
THE VERDICT: It almost feels, in the wake of the Equality Referendum in Ireland in May 2015 and the US Supreme Court passing the same in June 2015, that ‘Freeheld’ has lost some of the impact it could have had if it was released a year ago. As it stands, the film is well acted and an important, if familiar story.
Julianne Moore takes on another uncomfortable and difficult role in ‘Freeheld’; Laurel is not only a woman diagnosed with cancer, but she is someone who has always kept her sexuality secret for fear of being discriminated against. Unsurprisingly, Moore manages the role with dignity and grace, but she is seriously sidelined in the second half of the film. By contrast, the second half of the film is where Ellen Page as Stacie comes into her own as once Laurel becomes unwell, Stacie stands up for her partner and the rights she is fighting for. Page is soft and vulnerable, and fierce and loyal by turn, but always utterly watchable. Michael Shannon is strong as Laurel’s long-time work colleague Dane, and Steve Carell has a weirdly over the top and camp role – that doesn’t always sit well with the rest of the film – as gay equality activist Steven.
Ron Nyswaner’s screenplay – based on the real battle that Laurel and Stacie went through – is well enough written for the audience to see just why these two women had such a fight to get what was legally theirs in the first place. As well as this, the central three characters are well fleshed out, it is when we get to Steve Carell as Steven that we begin to run into trouble. Steven is such an over the top and flamboyant character that it is clear he was added to bring some levity to the film, but it is precisely this that undermines the message of the film and turns it from feeling like an important story of love and equality into a slightly caricatured and uneven film.
‘Freeheld’ is director Peter Sollett’s first film since ‘Nick and Nora’s Infinite Playlist’ in 2008 and, while the story is an important one, and one that could be told anywhere in the world, it does end up feeling rather twee, laboured, and as though it was a made for TV movie since it lacks bite for much of the running time. That said, the film is well acted to give emotional punches, and the joy and grief is given a light touch.
‘Freeheld’ is an important story, the impact of which, in the wake of legal changes in Ireland and the US, has certainly been lessened. That said, Moore, Page and Shannon do their best with this twee and familiar script, while Steve Carell seems to have been brought in from a different movie entirely, so camp and over the top is his performance.
RATING: 3/5
Review by Brogen Hayes