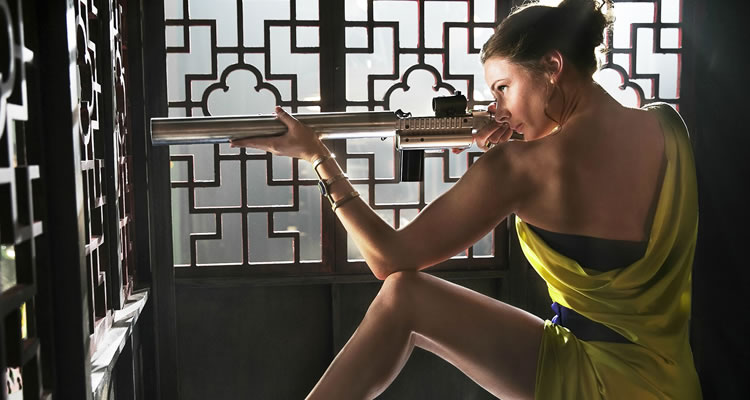 2015 has been a year for standout female roles in movies, and the upcoming film ‘Suffragette’ has some fantastic performances from Meryl Streep, Carey Mulligan and Anne-Marie Duff. ‘Suffragette’ is the story of Maud Watts (Carey Mulligan) who, in London of 1912, finds herself drawn out of her quiet life with her husband and child, and into the struggle of the women campaigning for the vote, and in the process, loses everything she holds dear.
To celebrate the release of ‘Suffragette’ in Irish cinemas on October 9th, Movies.ie have taken a look back over the standout women in the movies of 2015… So far.

Furiosa – ‘Mad Max: Fury Road’
Tom Hardy’s Max may have had his name in the title of George Miller’s film, but there is little doubt that ‘Mad Max: Fury Road’ was all about Charlize Theron’s kick ass Imperator Furiosa. Theron breathes life and strength into Furiosa, making her the baddest, strongest and most formidable bitch we have seen on screen in a long time. Never one to slow down, and with a seeming blindness to when she is beaten, Theron makes Furiosa the heart and soul of the film.

Amy – ‘Trainwreck’
Written and played by the sharp, witty and smart woman of the moment Amy Shchumer, the lead character of ‘Trainwreck’ is a woman who is perhaps emotionally stunted in some ways, but she is a woman that we all either know, or have been at some stage in our lives. Always fearlessly herself, Amy is a woman who likes sex, likes drinking and – for the most part – is fantastic at her job. A woman of our time, even if she does have some lessons to learn as she searches for love.

Claire – ‘Jurassic World’
Played by Bryce Dallas Howard, Claire is the head of the fully operational theme park Jurassic World. Although she starts off as rather cold and calculating, and struggling under the weight of Owen’s (Chris Pratt) misogyny, Claire soon comes into her own as the film goes on. Wearing heels and white for the entire film, Claire soon outshines her controlling colleague and proves, once and for all, that she is more capable, caring and badass than he is, as she outruns a Tyrannosaur while keeping her high heels on.

Ilsa – ‘Mission: Impossible – Rogue Nation’
Swedish actress Rebecca Ferguson brought the charming and mysterious Ilsa to life in the latest ‘Mission: Impossible’ film and was seemingly determined to keep up with her daring co-star Tom Cruise, as she did many of her own stunts for the film. Ilsa steals the show with her skill, charm and tenacity, becoming one of the first women in the ‘Mission: Impossible’ franchise to be more than just eye candy, and give Ethan Hunt a run for his money.

Joy – ‘Inside Out’
Although Joy (Amy Poehler) is not the first female lead character in a Pixar movie – that distinction goes to Merida in ‘Brave’ – she is one of the best and fully rounded female characters we’ve seen in cinemas this year. Although Joy starts off the film as controlling and relentlessly chirpy, through some dangerous adventure and life lessons from her friend Sadness (Phyllis Smith), she learns the value of all emotions, as well as throwing herself onto trains of thought, taking on the memory dump and a frankly terrifying birthday clown.

Honourable mentions to… Kate in ‘Sicario’, Jupiter in ‘Jupiter Ascending’ and Ava in ‘Ex Machina’.

Do you have a favourite female role from 2015? Let us know in the comments below.

‘Suffragette’ is released in Irish cinemas on October 12th 2015.
Watch the trailer below…