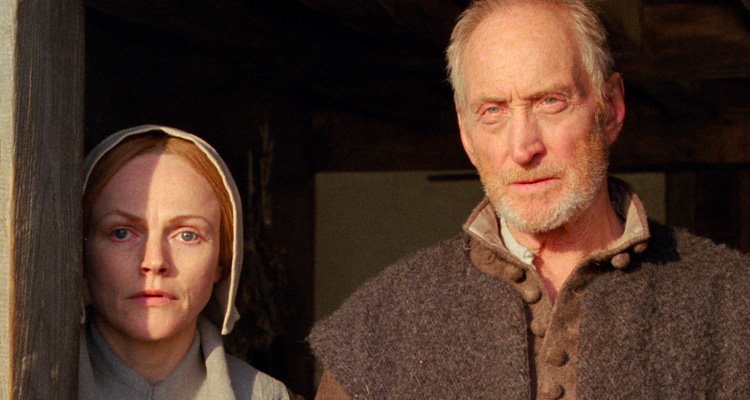 One of the highlights of this years BFI London Film Festival, Fanny Lye Deliver’d was due to have a cinema release this summer but audiences in lockdown will now the opportunity to see it at home when its released on demand from June 26th.

Set on a remote 17th century farm, the film follows Fanny Lye (Peake), who lives a quiet Puritan life with her husband John (Dance) and young son
Arthur, her simple world is shaken to its core by the surprise arrival of a mysterious young couple in need. An unexpected visit from the local Sheriff causes events to further escalate, changing Fanny’s life forever. The film is written and directed by Thomas Clay and stars an incredible cast of Maxine Peake, Charles Dance, Freddie Fox and Tanya Reynolds.

Fanny Lye Deliver’d will be released across digital platforms on 26th June 2020.

The film is a pure original and a great mix of genres, I’ve seen it called “A cult-western fairy-tale”, “a folk horror”, “A puritan western’ and “a period-come-Western about gender politics”, what is your preferred category to describe the film?
I call it a Puritan Western. Instead of oil dusters and Stetsons we have black capes and Bewdley hats, the flintlock instead of the Winchester.

Can you tell us about the background of creating the film and what got you interested in this story from 1657 rural Shropshire?
Christopher Hill’s book ‘The World Turned Upside Down’ captured my imagination at a young age and I’ve long wanted to make a film about this period of history. The eureka moment was realising I could combine 17th century radicalism with the greatest of genres, the western.

You wrote, directed and scored the film, what was the most difficult part of the film making process for you?
I always find shooting stressful, I guess that’s not uncommon. Composing the score was a different kind of challenge – shut in a room for a year, unsure if I would ever reach the end of the tunnel. But it was worth it – the moment when you finally get to record your score with so many wonderful musicians is incomparable. And now we have a soundtrack that works with the film but also exists as its own thing.

The set was built with incredible detail, how much research was involved in perfecting that?
Neno Pecur, our production designer, and myself visited existing buildings and museums and read books. We had a period construction expert involved from the start and brought in craftsman who specialise in historical techniques – carpenters, thatchers, a blacksmith, a bricklayer. A fencing expert came in to construct all of the fencing on site.

Poor weather conditions brought flooding to your sets, how badly damaged was the house and, how difficult was it to work around these challenges?
The house withstood the onslaught, but for the last few weeks of the shoot the floor of the kitchen was constantly flooding. Our solution was to dry the flagstones every hour or so with flamethrowers.

The film doesn’t just have a historical feel but it has nods to film noir & Hammer Horror films from the past. Did you revisit any old movies or literature for research or inspiration?
Other inspirations have likely crept in there, but it was the western at the forefront of my mind – Heaven’s Gate, Days of Heaven, Once Upon a Time in the West, those are the films I offered to Giorgos as visual references. Other cinematic inspirations include Ride in the Whirlwind, The Searchers, The Great Silence.

The film utilises longer scenes with lots of close-ups on the actors coupled with lingering shots, what was the thought process behind this style of filming?
Some directors prefer to stick with a particular style throughout their career, or, increasingly these days, eschew style altogether and embrace the rote form of Eisensteinian montage that has become ubiquitous during the ‘age of TV’.

Personally, I find that each story demands its own style. It comes from the script, screaming out of the page. The rightness of an approach asserts itself and I must do as instructed.

Did the longer scenes and lingering shots give the actors more flexibility to flesh out their characters? The characters facial expressions and mannerisms are very noticeable and bring added depth, were these mannerisms scripted or worked out in rehearsal?
I always come in with a very precise shotlist and vision of how a scene should play, but we would rehearse in the morning most days and then sometimes things would change based on that rehearsal. Giorgos gets a few hours to light and then we begin. I shoot quite a lot of takes, it’s nice to keep going until both myself and the actors are happy that we’ve done justice to the scene.

Was there much time for workshopping and rehearsing with the actors before shooting?
Most of the rehearsal time was incorporated into the shoot since casting was still falling into place when production began. In the first week, we had Maxine, Tanya and Zak Adams. Charles joined in week two, with Freddie, Peter and the others arriving in week three.

The film has a very impressive cast, can you tell us about the casting process? In particular Maxine Peake, how did your initial discussions about the character go?
Maxine also has a thing for 17th century history, so there was an instant connection there. It was clear that Maxine understood Fanny and that we had a shared vision of how and why the film should be made and everything grew from that starting point. She gives a fantastic performance I think.

Freddie Fox recently starred in the Irish famine movie ‘Black 47’ , a movie that also mixed genres and was labelled ‘an Irish western’, did you get the opportunity to see it and if so what did you think?
I really enjoyed ‘Black 47’. Freddie is great. It’s another period of history that doesn’t get enough attention.

Can you tell us about working with cinematographer Giorgos Arvanitis on the film? What did he bring to the project?
I always knew Giorgos would shoot Fanny Lye. Sixteen years ago, we worked together on my first feature, The Great Ecstasy of Robert Carmichael, and Giorgos’ perfectionism and rigour was a great inspiration. Giorgos’ motto is “The good is the enemy of the best”, I couldn’t put it better.

The film will embrace the current trend of going straight to on demand due to cinemas being closed. Would you like to see a cinema release for the movie when things return to normal?
Obviously, it would have been great to see the film given a proper theatrical release – on 35mm as shot and intended. 35mm infrastructure is ever-shrinking however, so I’m not sure if that was ever on the cards. As for DCP, some home theatres are approaching that quality, especially if you watch the film in 4K.

As we’ve broken the window, most theatres won’t play the movie now – if and when they re-open – but I think getting the film out there in front of an audience takes priority.

The film received its world premiere at the BFI London Film Festival, how did audiences respond to it?
We sold all the tickets and had a great response from the LFF audience. I’m accustomed to being heckled out of the cinema, so it made a nice change.

As a very creative person how has your lockdown experience been?
We were actually in the process of moving to Ireland before the pandemic struck. Brexit and Boris – my wife and I have had enough. But now everything is up in the air. Bottom line though, we’re very lucky to have avoided the virus so far, to be spending time with our kids and to have access to a garden. It’s hard to imagine what so many people are going through.