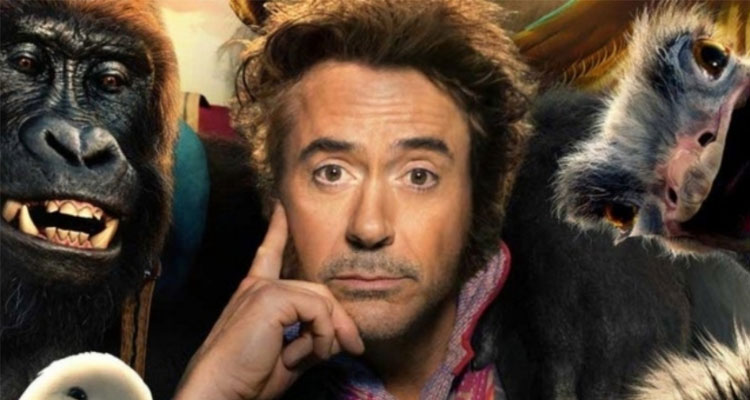 Does little to impress

The Plot: Doctor John Dolittle (Robert Downey Jr.) was famed for his ability to talk to animals. When his beloved and adventurous wife died on a mission, he withdrew into his mansion with his animal friends. When young hunter Tommy (Harry Collett) trespasses in order to bring a wounded squirrel to the good doctor, it gives new purpose to Dolittle. He’ll need it as at the same time he receives a royal summons, as Queen Victoria (Jessie Buckley) is deathly ill. He diagnoses that she’s been poisoned and needs an antidote from a rare flower that is on the other side of the world. He sets sail with Tommy and his animal friends to save the Queen…

The Verdict: Doctor Dolittle has been a tricky beast to wrestle under control and turn into cinematic gold. The series of books by Hugh Lofting which began a century ago have been tackled by Hollywood several times. The 1967 Rex Harrison musical very nearly torpedoed the studio formerly known as 20th Century Fox, such was its meagre takings at the box office. Eddie Murphy had a go in 1998 – with predictably forgettable results, given his fading star power by then. Is it a case of third time lucky then for the 2020 version, this time front-lined by Robert Downey Jr. in his first non-Iron Man outing for several years? Sadly not. The curse of Doctor Dolittle strikes again, with director Stephen Gaghan unable to control the worst excesses of both Downey Jr. and the visual effects department.

It’s a strange choice of career turn for Gaghan. He’s best known for writing the Oscar-winning Traffic and then writing/directing political thriller Syriana. He may not have directed many films at this stage, but his name carries a certain weight in the industry. What possessed him to direct and co-write a family film with talking animals? Answers on a postcard. He’s not the only writer here – there are four others. Too many writers spoil the formula and it’s evident in the scrappy and often incoherent script. It starts well with a striking animated sequence that catches the attention. The introduction to Doctor Dolittle is a fun and lively sequence, with a wild-eyed and wilder-haired Downey Jr. It then settles into its straightforward going-on-a-mission plot, with dastardly Doctor Blair (Michael Sheen) in pursuit.

It’s at this point that the film starts to resemble a lost Pirates Of The Caribbean script, but with none of the panache and derring-do of that swashbuckler franchise. Antonio Banderas pops up as King Rassouli, Dolittle’s still angry father-in-law… but is given virtually nothing to work with. The script just places him as a minor obstacle (a version of ‘animal chess’ in the film is a good metaphor) and squanders Banderas’ considerable talent and screen presence. Further problems lie with Dolittle himself. His story arc is choppy and mostly unformed, leaving him as a strangely unfulfilled character. It’s not helped by Downey Jr. going full Johnny Depp with the role. The broad Welsh accent (which appears to have been entirely re-dubbed in ADR) is not always clear to understand. It looks like he wasn’t getting any lessons from Welshman Michael Sheen.

The Depp comparison is apt, as Dolittle has the air of a Tim Burton film on a bad day. There’s something off about the whole thing, not helped by reports of extensive re-shoots. It was presumably a film with good intentions but lost its way amid a flood of unconvincing CGI animals and couldn’t find a way back to the good stuff that it established early on. It’s a classic case of the wrong director attached to the material. This Dolittle does little to impress. Maybe it’s time to lay this difficult beast to rest and move on.