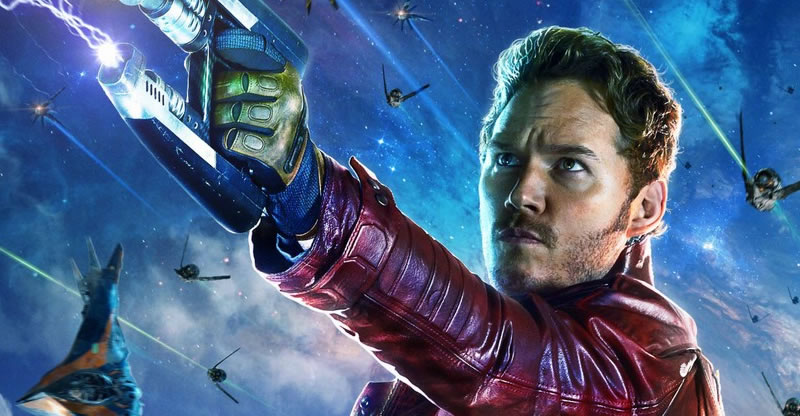 Chris Pratt interview for GUARDIANS OF THE GALAXY

With The Lego Movie and now Guardians Of The Galaxy, funny guy CHRIS PRATT has found himself on Hollywood

Chris Pratt is not your typical Hollywood leading man. Which is perhaps why he makes such a great one. Best known for his comedic chops on TV’s ‘Parks And Recreations’ (playing cocky meathead Andy Dwyer) and supporting slots in the likes of ‘Zero Dark Thirty’, ‘Moneyball’ and his wife Anna Faris’ 2011 dud ‘What’s Your Number?’, life has taken a sudden unexpected turn for Pratt. Into something approaching fame and fortune.

With one of the year’s finest, funniest and most lucrative films, ‘The Lego Movie’, already under his belt, Pratt is about to be seen in Marvel’s latest box-office assault, ‘Guardians Of The Galaxy’, a wickedly funny and deliciously slick space opera wherein Pratt’s Peter Quill manages to be about 65% Hans Solo and 35% Indiana Jones. The film is going to huge, and not just because of the marketing onslaught that Marvel and Disney will once again unleash. ‘Guardians Of The Galaxy’ is going to be huge beyond its marketing push because it’s so damn good.

Must be a surreal year for you – ‘The Lego Movie’ proves to be a monster, and now Guardians looks set to follow suit…
This whole thing has been a real whirlwind. The press is something new – I’ve never done this kind of push before. Even with ‘The Lego Movie’, we did, like, a three-day junket at Legoland. That was pretty neat, but there is a similar vibe with this movie and ‘The Lego Movie’. I’ve done other junkets before, but I really get the sense here that, as with The Lego Movie, people legitimately like this, a lot, and it’s kind of new, and interesting, and neat, and unlike anything that they’ve seen before. It felt like that on The Lego Movie too, so, I think people will go and see this one…

There have been movies though where you didn’t feel that way?
Yeah, I’ve been on junkets where it was work for us, and also for the people who were asking us the questions. I’ve been a salesman. I know it’s all about the product, you know. It’s pretty easy to get enthusiastic when you believe in the product though. Either way, you’ve got to sell yourself, even when the crap you’re selling is not good. You still got to sell it.

What would Bert Macklin, Andy Dwyer’s alter-ego on Parks And Recreation, make of Guardians Of The Galaxy?
Bert Macklin? Bert Macklin doesn’t watch movies. He watches surveillance footage, that’s it.

Very low budget movies.
Yeah, very low budget. Andy Dwyer would lose his mind. He would see it in 3D, as long as he could afford. Which he probably couldn’t.

The Guardians aren’t the most famous of Marvel creations – had you heard of them before?
Yeah, I had heard of them before. My friend Travis Osborne was collecting ‘Guardians Of The Galaxy’ right around the time I was collecting Punisher, and his brother was collecting Wolverine. This was around ‘91, I think. It was a different version, and there was no Star-Lord. There was Yondu, and a character called Charlie 27, I think – I don’t know; I never really read the stories, I just drew pictures out of them. I really loved the covers, and I painted murals on my walls of ‘Punisher 2099′, and I had Wolverine fighting Sabretooth on my wall, and my brother had ‘Amazing Spider-Man’ and ‘Spawn’ on his wall. We painted comicbook murals all the time.

Given that you could now be cornered by Comic Book Guy at any given moment, do you feel the need to learn all the Marvel back stories?
Going into this, I had a little apprehension on that front. I thought that maybe I’d encounter fanatic fans who know all of the deep corners of the universe, and all the trivia, and they’d bully me around. I gotta tell you something, no one has done that. People are happy to share their information, and no one that I’ve encountered made me feel that I have to be beholden to any rules were set up. Really, this is just Marvel launching ‘Guardians Of The Galaxy’ in a different medium – cinema. It’ll be the same title but different people. Which is kind of nice; it left us free to make a good movie, not one where we had to stick to all the previous rules that had come out through the decades. We didn’t have to fit the mythology perfectly; we’re getting to tell the story from the start our way.

Guardians is going to return in 2017 – how many have you signed up for?
I have to look at my contract again, but it’s either four, or five thousand.

An 85-day shoot, and you decided until the last one to put yourself in real danger, almost drowning as you shot 20 feet underwater whilst feeling like crap. A fun shoot, or very, very hard work?
Well, I love drinking Red Bull, but I wouldn’t want to work at the factory. We worked. It was a lot of work. And not just 85 days shooting; there was another four weeks of rehearsals before that, and stunt rehearsals, and another five months of physical training for it. So, that was a solid year of working on the movie – which, given that it’s not easy getting work in this business, I ain’t complaining about.

When you’re 20 feet under, not feeling the healthiest, do you get the Oscar obituary floating before your eyes?
I never truly thought I was going to die under there, but it was like this a lot during the course of the movie. There were moments where I just had to try and quieten my breath, and understand that the moment I was in was going to be over soon. A lot of times with the mask, I got pretty claustrophobic a few times. It was really hot, and I couldn’t breathe or see very well, and they developed a system to allow me to both see and breathe better as we progressed through filming. But after the first day, they realised that they couldn’t just snap the thing on my head, they had to bolt it together, because the wind machine kept blowing it off. So, it was a real process to take the thing off, taking two bolts out of each side with this bolt drills. And everytime they took it apart, I was just gasping for breath. I’m doing 60-year sprints with this thing on my head, and they’re shouting, ‘Go again! Go again!’.

I’m guessing the sneeze inside the mask was a lot of fun.
Oh, sneezing was not good. This is how it would go – every single day, the four bolts would be drilled on, and immediately my face would itch. They ended up putting a little fan inside that thing, but since it was miked – the audio guys were real sticklers about that – the fan had to be off whenever we were shooting.

Judas And The Black Messiah