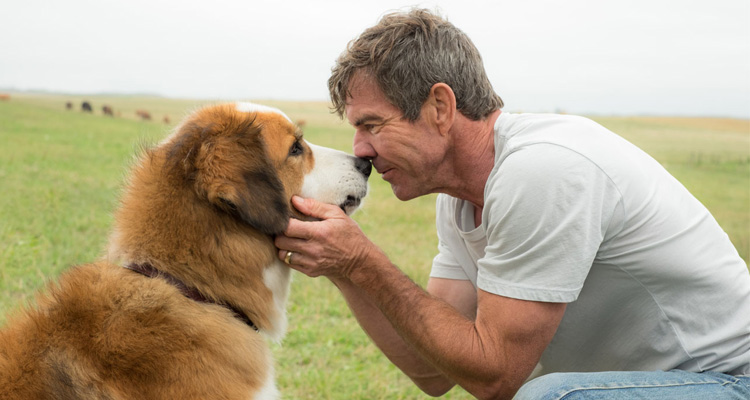 A DOG’S PURPOSE (USA/PG/100mins)
Directed by Lasse Hallström. Starring Dennis Quaid, Josh Gad, Peggy Lipton, Juliet Rylance, Britt Robertson
THE PLOT: Over the course of many lives, and many decades, a dog – voiced by Josh Gad – struggles to understand what his purpose is in life.
THE VERDICT: Shrouded in controversy since a TMZ video surfaced of a dog being treated cruelly on set – which has since been refuted as being fake and deliberately edited to mislead the public – ‘A Dog’s Purpose’ is a strange sort of film. Based on the novel by W. Bruce Cameron, there are touches of religious allegory – namely Buddhism, Hinduism, Jainism, and Sikhism – throughout the film, as the lead dog is constantly reincarnated, but it is obvious that the film also tries to answer the very human question of why are we here, through the eyes of a canine.
The cast of the film features Josh Gad as the voice of the dog known as Bailey, Ellie, Tino and Buddy throughout his lives, and Gad makes sure to emphasise the playful and loyal nature of dogs. The human cast is made up of Dennis Quaid, Peggy Lipton, Juliet Rylance, Britt Robertson, John Ortiz and Kirby Howell-Baptiste. Each of the actors does fine in their roles, but each also struggles as the only characters we really get to know are Bailey and his first human friend Ethan, with the others seemingly filling out the film’s running time.
It took a whopping five writers – including novelist W. Bruce Cameron – to bring ‘A Dog’s Purpose’ to the big screen; W. Bruce Cameron, Cathryn Michon, Audrey Wells, Maya Forbes and Wally Wolodarsky, and this is evident on screen. The first of Bailey’s lives is over before it begins, the seond – with Ethan and his family – is the longest, but it is the dog’s life with his fourth family that he believes to be the best, even though the audience gets to see very little of this. As mentioned, there are hints at the dog trying to find his purpose is a mirror of humans trying to find our own, but since the film offers no real answers, this feels like a waste of time, and the idea of reincarnation that keeps cropping up throughout the film feels as though it comes out of nowhere, and is included just for the sake of trying to create a narrative flow… Which does not work. There are some fun scenes, however, and the dogs are pretty cute, as is Bailey’s mourning the cat’s loss that it is not a dog.
As director, Lasse Hallström carries on his recent trend of making superficial films that are supposed to be moving but rarely are. The human performances in the film are fine – the dogs totally outshine them – and Hallström embraces the idea of ‘A Dog’s Purpose’ as canine propaganda, making sure that all actions from the dogs are seen as selfless acts of love, even when the y re eating precious artefacts or crying to be allowed to sleep on a bed. Hallström does not concern himself with the humans in the film, and does not bother fleshing out any characters while introducing subplots, only to have them vanish into thin air. Still… Dogs, Amirite!?
In all, ‘A Dog’s Purpose’ is a film that tries to answer the big questions in life through the eyes of a dog, and does not really work. Many ideas and subplots are raised in the film and allowed to fall by the way side, and the humans are never given a chance to crate real, believable or rounded characters on screen. The dogs are cute though, and even though the film is full of puppy propaganda – cats are cool too, you know! – there are some heartwarming scenes, just not enough to carry the rest of the film, which is a bit of a mess.
RATING: 2/5
Review by Brogen Hayes