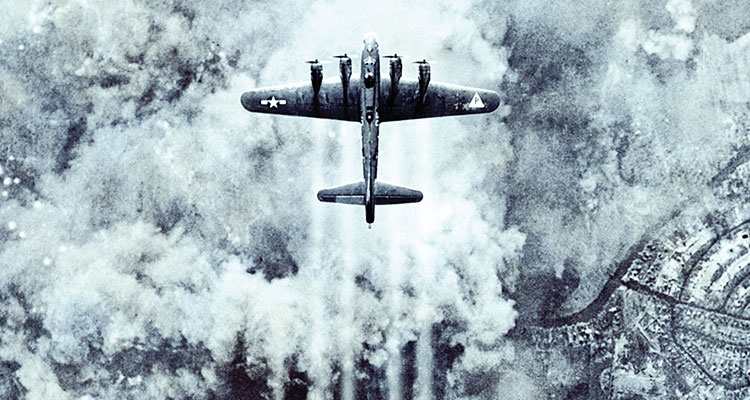 The Plot: Utilising recently discovered in-flight footage shot by director William Wyler and his camera crew for the film The Memphis Belle, this meditative documentary explores the reality of airborne conflict in World War II. Specifically, the American contribution as they committed 135,000 young men in the 8th Airforce who went on a risky daylight bombing missions over Germany in their Boeing B-17s – ‘the flying fortresses’. As told through the voices of the surviving men themselves, we discover the long periods of waiting both on the ground and in the air, before all hell breaks loose from below with constant flak and above with the Luftwaffe…

The Verdict: Peter Jackson may have started a trend. Last November, to mark the centenary of the WWI Armistice, he presented They Shall Not Grow Old. It was an astonishing glimpse into WWI trench warfare through restored colourised footage made all the more vivid when projected on a 3D cinema screen. The Cold Blue aims to do something similar in that it takes existing footage from WWII, restores it and then weaves a tapestry of authentic testimony from the young men who were there. The result is a film that isn’t as effective as Jackson’s. However, it retains a certain quality over its content to present the daily reality of being a US Airforce pilot on a bombing run over Germany.

Before he went on to direct the Oscar-winning Roman Holiday and Ben Hur, William Wyler took to the air with three cameramen (one of whom he lost in combat) and shot the footage that comprises the bulk of The Cold Blue (the title referring to the freezing temperatures and blue skies at the flying altitude of 26,000 feet). This footage was later the basis for the fictionalised but memorable 1990 film Memphis Belle. Director Erik Nelson has assembled this raw footage and moulded it into something resembling a narrative. That’s a light description at best. The colour footage looks in great shape and puts you right in the cockpit and gunner’s turret of the B-17, as flak explodes around you. However, context is an issue that runs throughout the film.

While the footage is an undeniably fascinating time capsule to jump into, Nelson struggles to mould it into a wholly satisfying narrative. Some of the footage used is incidental. A story about a pilot’s dog results in some cute dog footage in the cockpit. Not exactly necessary, particularly when Nelson takes his time before getting airborne. Divided into multiple segments, Nelson hits you with some startling facts like flying times, the number of successful bombing missions required before the crews can go home, conditions on board, survival odds and more. The story of in-air combat should be the real meat of the film, but Nelson wraps it up quickly and barely even touches on dogfight engagements with the Luftwaffe. He gives you enough footage to provoke thought, but not enough to explain the ever-present danger of death in the air.

For the last few minutes of this relatively short documentary, Nelson hands it over to the surviving crew members, now well into their 90s. Their final thoughts range from the collateral damage of killing civilians or ‘just Germans’ to the most poignant reflection – telling current generations that they did it so that the annihilation of a world war doesn’t happen again. That’s something worth remembering. The Cold Blue is a noble salute to the US airmen who lived to tell their hair-raising stories… and the majority who died in combat. While not essential viewing, history and WWII buffs should find their interest piqued enough by the combination of footage and testimony.