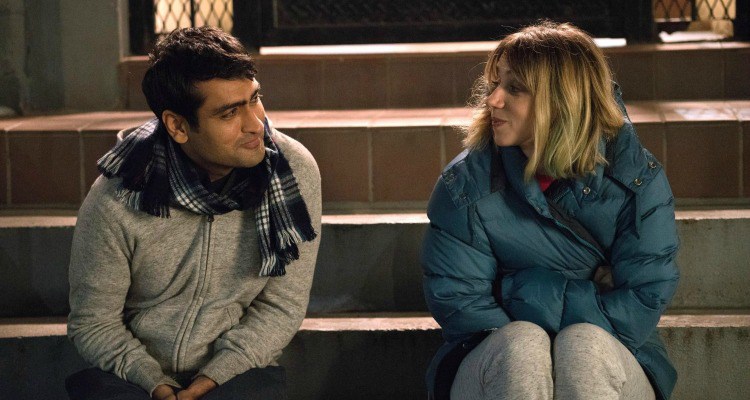 THE BIG SICK (USA/15A/120 mins)
Directed by Michael Showalter. Starring Kumail Nanjiani, Zoe Kazan, Holly Hunter, Ray Romano.
THE PLOT: Kumail (Kumail Nanjiani) is a stand-up comedian who moonlights as an Uber driver in Chicago. Or maybe that’s the other way around. At one of his shows, he’s heckled (negatively) by sparky Emily (Zoe Kazan). They chat afterwards and an instant attraction develops. That progresses to a hook-up. Emily is not really in a position to date and have a relationship right now, but she’s continually drawn to the honest Kumail. He has obligations of his own to his Pakistani family, where an arranged marriage is expected. Emily finds out and they have an argument. Shortly afterwards, she ends up in a medically-induced coma after being struck down by a mysterious illness. While she’s sleeping, Kumail watches over her and bonds with her laid-back parents Beth (Holly Hunter) and Terry (Ray Romano)…
THE VERDICT: When a film is drawn from a real-life experience, it takes on another dimension. Someone is sharing a part of their life with the world, so it becomes that bit more tenable to an audience. ‘The Big Sick’ is based on the courtship of Kumail Nanjiani and Emily V. Gordon, from their initial spark through to a challenging period when he wasn’t quite her boyfriend but still acted like one. This could have been TV-movie-of-the-week stuff, a weepie with all heart and no humour. Thankfully, Nanjiani and Gordon’s script is so sharp and spot-on in its observations of these imperfect but decent characters.
The film’s major plus point is its wicked, well-judged sense of humour. Much like Nanjiani’s stand-up routines, the humour veers on the fringes of the potentially controversial at times. Asked about 9/11 by Terry, Kumail delivers a cutting response. Though, there’s no indication that he actually means it. That’s the beauty of the humour here – you can laugh without feeling guilty about it. It’s a delicate balance, but the humour is true to life in all its messiness and imperfections. If you can’t laugh at life, then you may need a humour transplant. Later scenes involving Emily feel honest and atypical of a movie of this kind.
Many of the laughs come courtesy of the slightly dim Terry, delivered with perfection by the deadpan Romano. Kazan continues to delight with her quirky performances – we really should see more of her. She’s absent for a large part of the film, yet her presence is missed and certainly felt. The real find here though is Nanjiani, who has been acting for a number of years. If you didn’t know him before, then you’ll certainly remember him after seeing this film. Essentially playing himself, he’s frequently hilarious and also touchingly self-aware, challenging his family’s traditional views. The banter with them is a highlight. ‘The Big Sick’ is a touching, bittersweet delight, buoyed by a brilliant script and wonderful performances. If only more romcoms could be this simple and yet sophisticated.
RATING: 4/5
Review by Gareth O’Connor