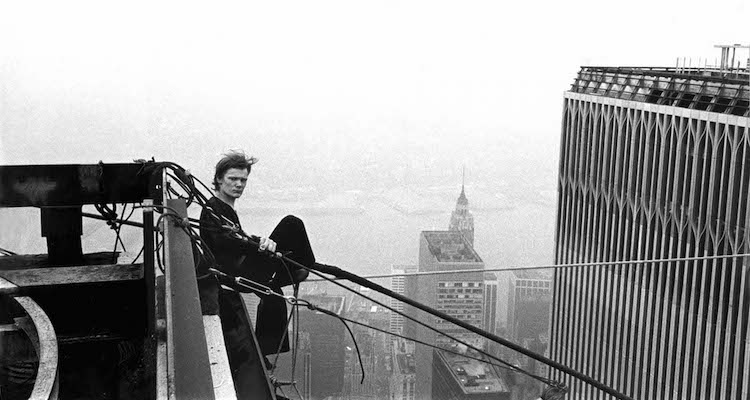 August 7, 1974, New York, New York, USA: Philippe Petit, a young frenchman, gave the most spectatular high-wire performance of all time by transversing the span beteen towers I and II of the WTC eight times in one hour. Mr. Petit and his team had illegally rigged their cable under the cover of night and he was arrested by the Port Authorities and charged with "attempt(ing) to cause public inconvenience," and trespassing.. Credit: Jean-Louis Blondeau / Polaris

Movies based on Documentaries

Which came first, the documentary or the fictional tale? Sometimes truth inspires fiction and other times it is the other way around. In the case of ‘Our Brand is Crisis’ – released in Irish cinemas this week – it is certainly a case of truth inspiring fiction. ‘Our Brand is Crisis’ is based on a 2005 documentary film of the same name, directed by Rachel Boynton. In this new version, Sandra Bullock stars as Jane Bodine, an American political consultant, who is brought in to help unpopular Bolivian politician Pedro Castillo (Joaquim de Almeida) win the country’s Presidential election.

‘Our Brand is Crisis’ also stars Billy Bob Thronton, Scoot McNairy and Zoe Kazan, and the roundabout way this narrative feature film made its way to the big screen got us thinking about other feature films that were documentaries first…

THE SESSIONS
‘The Sessions’ was inspired by the Oscar winning short documentary ‘Breathing Lessons: The Life and Work of Mark O’Brien’, directed by Jessica Yu. The documentary focused on the spiritual struggle that O’Brien went through when trying to come to terms with the ill effects of contracting polio at a young age. The documentary brought O’Brien and his works of poetry and non-fiction writing to public attention, and it was his essay “On Seeing a Sex Surrogate”, written for The Sun Magazine in 1990 that inspired a film about O’Brien’s quest to lose his virginity.

Writer and director of ‘The Sessions’, Ben Lewin, is a polio survivor himself and, although he was mainly inspired by the article O’Brien wrote, he also worked closely with O’Brien’s partner and the sex surrogate he worked with. ‘The Sessions’ brought actor John Hawkes to public attention, and he was honoured with a Golden Globe nomination for his performance.

THE FIGHTER
David O. Russell’s 2010 drama Mark Wahlberg, Christian Bale, Amy Adams and Melissa Leo was inspired by the 1995 documentary ‘High on Crack Street: Lost Lives in Lowell’, which looked at the lives of three addicts in the city of Lowell Massachusetts, and their daily attempts to get high. One of the people featured in the film was former professional boxer Dicky Eklund and it was his story that inspired ‘The Fighter’.

Although the story of ‘The Fighter’ focuses more on the rise of Micky Ward (Mark Wahlberg) – Dicky’s younger half brother – to fame in the boxing world, the documentary that inspired the film, retitled for the sake of fiction, features in ‘The Fighter’ and is credited as the catalyst Dicky needed to turn his life around.

THE WALK
Robert Zemeckis’ latest film ‘The Walk’ was released in Irish cinemas in October 2015, and it was inspired by the real life story of Philippe Petit’s high wire walk between the Twin Towers of New York’s World Trade Centre in 1974. ‘The Walk’ was inspired by the 2008 documentary ‘Man on Wire’, directed by James Marsh, which was framed like a heist movie, and contains images of Petit and his accomplices preparing for the death-defying walk, as well as still images of Petit on the wire, interviews with those in on the performance and recreations of events.

‘The Walk’ is a much more whimsical film that still incorporates the feel of Petit’s walk being a heist, but also goes back over the life of the performer and his inspirations for taking his life in his hands, 110 storeys off the ground.

RESCUE DAWN
‘Rescue Dawn’ is one of the more unusual stories to go from documentary to feature film, since Werner Herzog directed both ‘Rescue Dawn’ and the earlier documentary that inspired it; ‘Little Dieter Needs to Fly’.
‘Little Dieter Needs to Fly’, released in 1997, is the story of German-American Navy pilot and Vietnam veteran, Dieter Dengler who was taken prisoner in Laos after his plane was shot down over the country in 1966. Dengler was tortured and starved before he escaped his captors, and much of the original documentary focuses on Herzog and Dengler returning to Laos and Thailand to recreate the latter’s ordeal.

10 years later, in 2007, Herzog directed a feature film based on the extraordinary life of Dieter Dengler – ‘Rescue Dawn’, which starred Christian Bale and Steve Zahn. Dieter Dengler’s story obviously stuck with Werner Herzog long after he made the documentary about the man and, in an interview with Rotten Tomatoes, Herzog said he felt there was more to tell on Dieter’s story; “For Dieter and me it was always clear that this was unfinished business. Too many things that are really fascinating – such as what happened in the prison camp – are hardly touched in the documentary”.

DEVIL’S KNOT
Atom Egoyan’s 2013 film ‘Devil’s Knot’ tells the story of three teenagers – Damien Echols, Jason Baldwin, and Jessie Misskelley Jr – who are arrested and charged with murder after three eight year old boys go missing and are later found beaten and murdered in the small town of West Memphis, Arkansas. The film stars Reese Witherspoon as Pamela Hobbs, mother of one of the murdered boys, and Colin Firth as Ron Lax, a private investigator.
‘Devil’s Knot’ is based on the true story of Echols, Baldwin and Misskelley Jr and how they ended up serving 18 years for a crime they did not commit. The film, and the events covered in it, were covered in several documentaries over the years, including Amy Berg’s 2012 film ‘West of Memphis’, and the HBO ‘Paradise Lost’ trilogy, which tried to uncover the truth about the murders as the case went on.

Do you have a favourite film that’s based on a documentary? Let us know in the comments below.

‘Our Brand is Crisis’ is released in Irish cinemas on January 22nd 2016. Watch the trailer below…