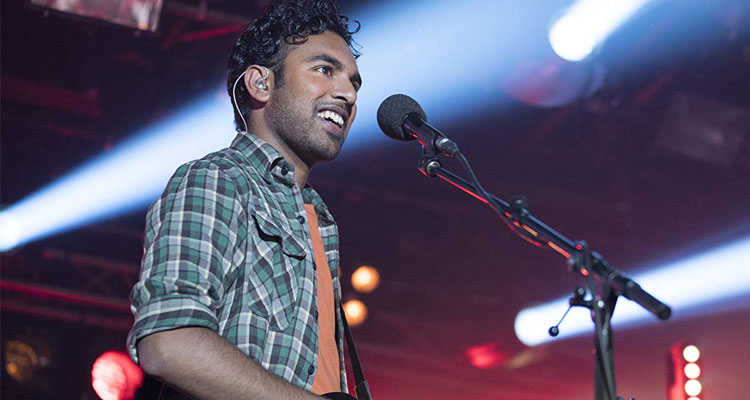 The Plot: Struggling singer-songwriter Jack (Himesh Patel) dreams of hitting it big. His manager and best friend Ellie (Lily James) is there for him all the way, but he fails to recognise that she has deeper feelings for him. During a mysterious blackout that affects the whole planet, Jack is hit by a bus and wakes up in a slightly different world. Amazingly, nobody else remembers The Beatles and their songs. Jack uses this to his advantage, producing one hit song after another from his memories of The Beatles. His talent is nurtured by one Ed Sheeran, with a few suggestions along the way. He’s then whisked off to Los Angeles by new talent manager Debra (Kate McKinnon), where he finds the fame and fortune he craved for. But what does this mean for his childhood friendship with Ellie… and the moral responsibility of using The Beatles as his platform to stardom?

The Verdict: It sounds like an unlikely partnership. Danny Boyle, the director of the gritty Trainspotting and the Oscar-winning Slumdog Millionaire. Richard Curtis, the producer/writer of Notting Hill and many more hits within his own uniquely-defined Curtis Cinematic Universe. That being a universe populated by lovelorn but decent people, backed up by quirky best friends and a mad dash to the airport / train station for a lead character to tell another character what needs to be said. On paper, it shouldn’t work… but their new collaboration Yesterday most certainly does work on many levels. It turns out to be a fruitful partnership then, yielding the best of both their styles of filmmaking.

As in About Time, it takes a somewhat daffy concept, asks the audience to suspend disbelief and just go along with it without questioning the logic of its premise. It’s not for eye-rolling cynics then, who might scoff at the idea of one character being the sole inheritor of The Beatles’ vast legacy of making sweet music. That’s not all though. Jack is the only one to remember other aspects of popular culture too (a running gag that becomes the gift that keeps on giving). The script by Curtis and Jack Barth doubles as a character portrait of the wide-eyed Jack and a fitting tribute to the music of more than notable musicians (a running theme this summer – see also the upcoming Blinded By The Light).

The first two acts focus on Jack’s ascent to stardom and how it affects his friendship with Ellie. This is the heart of the film. Not the music so much, but this smaller story of two childhood friends who can’t quite make the transition to something deeper. It’s all there in the early scenes and palpable chemistry between Himesh Patel and Lily James. Both of them give the impression that a trigger is just needed to finally get these two together. Boyle teases this out over the course of the film, while Jack is distracted by his new-found fame. There’s a danger that the moral aspects of passing off The Beatles music could scupper the film at this point. Is Jack keeping their memory alive for an unknowing world… or is he just an opportunist who doesn’t deserve the limelight? Boyle and Curtis skirt rather close to the edge on this issue, but pull a rabbit out of the hat in the third act.

In a film that has its cutesy, predictable moments, Boyle and Curtis throw in some genuine surprises that give their film an emotional resonance and uplift that propels it to a satisfying conclusion. The film really needed these emotionally-charged scenes at this point, so the audience knows that it’s about more than just a quirky, high-concept idea made flesh. It’s not just a ‘what if’ scenario but also about making things right in the world again. Boyle shows a lightness of touch in his direction, eager to have those crowd-pleasing laughs and invest in Curtis’ brand of decent people stuck in sticky situations. Yesterday is an agreeable confection, ideal for a summer release when suspension of disbelief is the norm. Here Comes The Sun indeed. And yes, the music is glorious too.