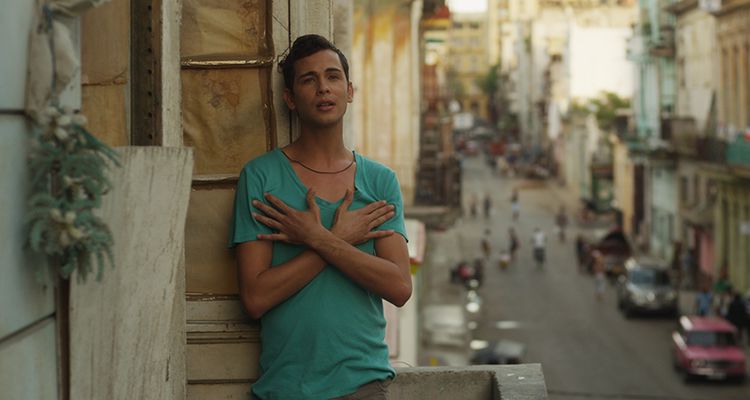 MOVIES.IE’S ONE TO WATCH!
VIVA (Ireland/Cuba/15A/99mins)
Directed by Paddy Breathnach. Starring Hector Medina, Jorge Perugorria, Luis Alberto Garcia, Laura Aleman, Luis Manuel Alvarez, Mark O’Halloran.
THE PLOT: Almost making a living by cutting old ladies hair and looking after the wigs down at the local drag queen bar, when one of the performers at the latter does a smash-and-grab in the night, Jesus (Medina) is more than tempted to try and fill their high-heels. Mama (Garcia) is not so sure that his favourite backstage worker is ready for the limelight, but nonetheless allows the skinny, young enthusiast to step out to his late mother’s old vinyl collection of torch songs. Jesus doesn’t quite stand tall, or straight, in those high-heels, but there’s plenty of promise there. Promise that is suddenly stopped in its tracks when his wayward father, Angel (Perugorria), turns up at the bar after years inside. The evening ends with Jesus bloodied on the floor.
Moving back in to the family home, the gruff, brutish, drunken Angel claims that he’s ready to become the good father at last – and for him, that means no more drag for his son. A once famous boxer, Angel can’t quite accept the idea of his own son in a dress, but, without that drag club income, Jesus is forced to make money on the streets…
THE VERDICT: From the Bible to Bracken and Billy Elliot, tales of fathers banging heads with sons have long fascinated storytellers, and for Irish filmmaker Paddy Breathnach (‘I Went Down’, ‘Man About Dog’), a 1996 trip to Havana sparked his latest offering. It was one Cuban family’s home-built venue for their drag queen son that really stuck with Paddy, and he soon had an outline for a story winging its way to Mark O’Halloran (‘Adam & Paul’, ‘Garage’, etc), who weaved the idea into a working script. And if the plot isn’t exactly original, Viva is still an effecting and beautifully-crafted affair.
Much credit – beyond Breathnach’s light-touch direction – must go to both the cast (Medina, in particular, is perfect as the steely and effeminate Jesus) and to cinematographer Cathal Watters (making the move into fiction features after Aoife Kelleher’s ‘One Million Dubliners’ and upcoming ‘Strange Occurences In A Small Irish Village’). Managing to avoid going full Havana Tourism, Watters captures the shadows and sun-kissed poverty of Jesus’ world beautifully, whilst Medina shines even stronger when surrounded by such subtle play from the likes of Perugorria and Garcia. It would have been easy for the cast here to go full Mexican novellas.
Comparisons to Almodovar will jump out initially for most people, but, once you step into Viva, you’ll find Breathnach has created his own particular twisted love story. Undoubtedly one of the more seductive and satisfying Irish films in recent years, ‘Viva’ captures the same heady mix of the sensual and the grit of everyday people trying to make it in the big bad world as achieved with Sheridan’s sublime ‘In America’.
RATING: 4/5
Review by Paul Byrne