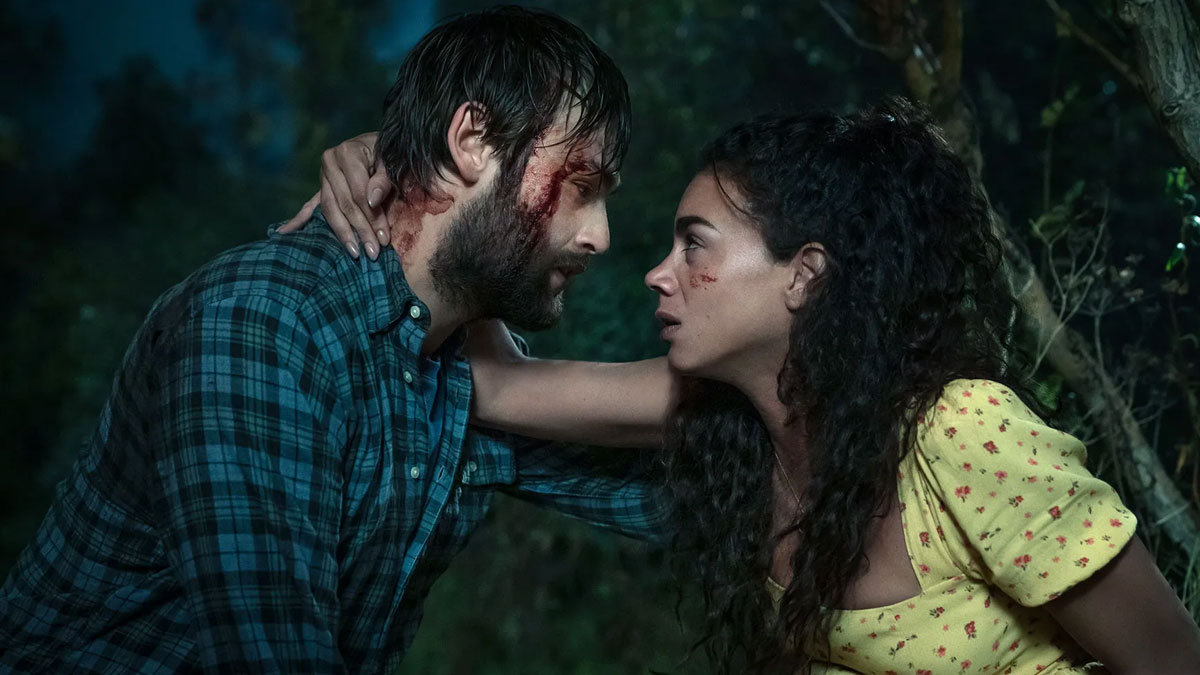 This weekend Warner Brothers release a new horror movie with an Irish twist… ‘Unwelcome’ see’s an expectant couple move to rural Ireland to escape the intensity of urban life, only to come across new threats at the end of their garden. Director Wright, who previously directed the Irish boozey comedy horror ‘Grabbers’ has gone deep into Irish folklore to bring The Red Cap to the big screen. Depending on the folklore, a Red Cap is an Irish fairy gone bad, a goblin or a murderous leprechaun… we caught up with the director to learn more…

Tell us about the Red Caps, who many will know from Irish folklore?
Red caps are from an obscure bit of Irish folklore, they dip their caps in the blood of the victims. They’re not very nice.  They’re kind of the antithesis of leprechauns, which I quite like, because I know how annoyed Irish people get by mentions of leprechauns, and that whole sort of paddywhack really comes with it. It felt like a fun way of sort of taking on leprechauns and turning them into something very dark and sadistic and not very, you know, fun at all, although they have quite a good sense of humour. They enjoy their violence.

What type of research went into the Red Caps & Irish mythology in general?
So, we made them extremely violent and then everything sprang out of that. But we dug into a lot of Irish folklore, read a lot of myths and legends, read a lot of fairy tales & went back to the tales of the Brothers Grimm.  My ambition for the movie was, I love fairy tales, and they feel sometimes to me like horror movies , and the way that everything is symbolic and psychological is really interesting to me. What I really wanted to do was make a fairy tale for adults, that’s completely unsuitable for children, which it definitely is.

The film has a strong supporting cast of Irish actors, Like Colm Meaney, Jamie-Lee O’Donnell (Derry Girls) and Chris Walley (Young Offenders). Tell us about casting them?
They play a family called the Whelan’s who are builders. So, Colm is the patriarch of this family of builders who are very dysfunctional, and not a very happy family. Colm, obviously is a great actor from ‘Star Trek’ and everything else. You don’t often see him playing an out and out villain, and I really enjoyed that he is not a nice guy. To me, what was great about Colm was he actually looks the part, you could imagine him running a building site in the middle of Ireland. He looks like he could do that. He’s quite a big guy. He brought a real sort of sense of humour, a sense of fun to it, as well.

We just looked for actors that bring a sense of humour to the table. I think we’ve been really lucky, with the actors that we landed with… and I think people are going to really enjoy how much they dislike the Whelan’s.

How have the red caps been received so far?
We recently had a screening at a fantasy film festival in Spain. There were 1400 people. That was the first public screening and when the red caps arrived, there was a huge round of applause from the whole cinema, and went on for about 15 seconds, which was a great thing for me. What we’ve done is sort of mashed up old, and new and used a hybrid of techniques. ‘Gremlins’ is one of the inspirations for our movie, but when they’re in close ups, they do look a bit rubbery in animatronics… you’re never completely convinced that they’re real. And then on the other hand, you have modern films with fully CG creatures, and sometimes they can look amazing but then you have a wide shot, and you see them jumping around and they’re not weighted correctly, their gravity doesn’t look quite right.

Films like this also rely on location, because that in itself can also be a character. How was it finding the setting and locations across the country?
We went around Ireland and found fantastic places, it’s a real privilege of the job that you get to be out in these places. We shot where they made ‘The Quiet Man’ in Ireland and we shot in a forest up in County Down.

What do you hope audiences get out of the film because it looks very enticing and very dangerous?
What I’m hoping is people will find it thought-provoking, and interesting. It’s very much in the vein of modern horror. It’s a genre film, there are things to think about. Issues that we talk about… It’s full of shocks and surprises and twists. It’s a Friday night film really, plus, it’s great that Warner Brothers are putting it in cinemas, which is kind of unusual currently.

UNWELCOME is at Irish cinemas from Jan 27th