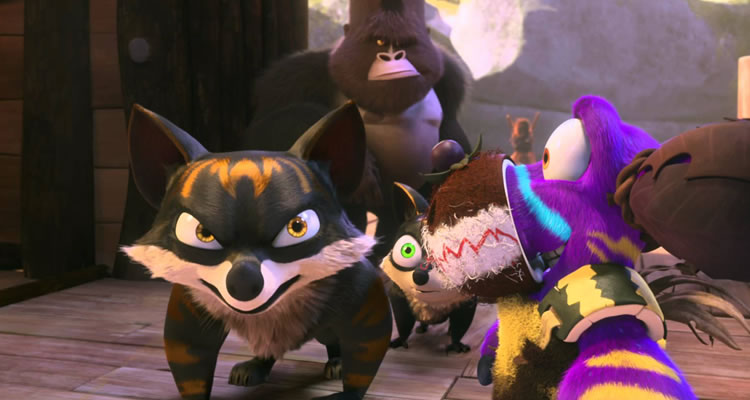 THE PLOT: Dave (Dermot Magennis) and his son Finny (Callum Maloney) are Nestrians, brightly coloured creatures who seem to have a hard time settling anywhere. When they hear the flood is coming, they set out to get onto Noah’s ark. After they are rejected and subsequently sneak aboard, Finny and his Grymp friend Leah (Ava Connolly) fall overboard, leading them on a mad dash for survival, and their parents in a mutinous attempt to turn the ark around.

THE VERDICT: Supported by Bord Scannán na hÉireann/the Irish Film Board, TWO BY TWO is a brightly coloured adventure animation that is great for little kids, but there is little here for anyone over the age of 7 or so.

The voice cast do well in their roles, making the characters seem warm and believable, but they are hampered by a familiar script, a tale we have seen before, and Alan Stanford doing a great job of imitating Jeremy Irons, which just reminds us all of The Lion King.

Richie Conroy, Toby Genkel, Mark Hodkinson and Marteinn Thorisson’s screenplay has a couple of giggles throughout, but for the most part, this is a story we have seen before; opposites attract in the name of adventure, and by the end of it all they are true friens. Creating the fictional creatures Nestrians, Grymps and Tanglefeet (Tanglefoots?) gives the story the advantage of the audience wondering what will become of them once the flood hits, but since this is a film aimed at the youngest among us, the peril never truly feels very perilous.

Toby Genkel and Sean McCormack direct capably, amping up the adventure and the themes of friendship and co-operation. These are sweet messages for the film to have, but other than the brightly coloured glowing creatures, there is little here in terms of story to set the film apart from any other animated film… FINDING NEMO is definitely one that comes to mind as a potential inspiration for the story. That said, however, the animation for the film is rather gorgeous, especially when the Nestrians get their glow on.

In all, TWO BY TWO is a prettily animated adventure that feels familiar and rather uninspired. There are a couple of giggles and a nice message for the kids, but the adults in the room may well find themselves switching off.

Review by Brogen Hayes
2
Rather uninspired