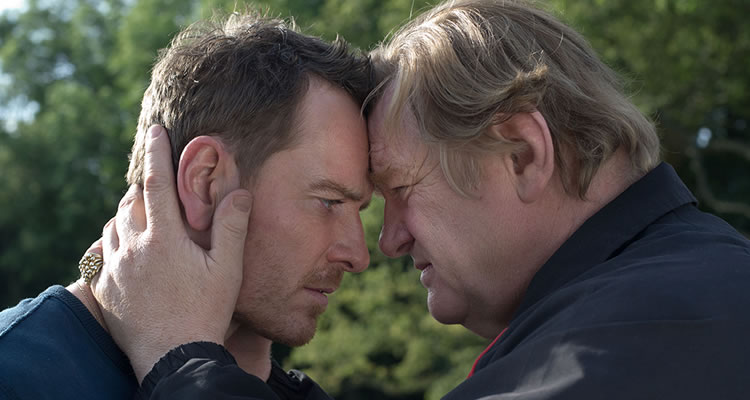 TRESPASS AGAINST US (UK/15A/99mins)
Directed by Adam Smith. Starring Michael Fassbender, Brendan Gleeson, Barry Keoghan, Killian Scott, Lyndsey Marshal.
THE PLOT: Chad Culter (Michael Fassbender) and his family live on a halting site with Chad’s father Colby (Brendan Gleeson) and other members of the extended family. Inherently drawn towards crime, and standing up to those that would “trespass against us”, Chad finally sees that an environment where the police are constantly on their tails is not one that he wants to subject his young children to any more. After one final job for the domineering patriarch of the family, Chad sets about getting away from his father, but soon realises that this is not as easy as it looks.
THE VERDICT: ‘Trespass Against Us’ marks the feature length debut of ‘Doctor Who’ and Chemical Brothers video director Adam Smith, and boasts an impressive Irish cast, including Brendan Gleeson, Michael Fassbender, Killian Scott and Barry Keoghan.
Michael Fassbender leads the cast as the uneducated but charming Chad Cutler; a man who has always lived under the domineering thumb of his father, and suddenly realises its time to get out. Brendan Gleeson takes on the role of Colby Cutler, said patriarch and imposing presence. Both Fassbender and Gleeson have a good thing going in their frightening stillness, which both display throughout the film; they work well together and their chemistry on screen is strong, but there is always an undercurrent of dissatisfaction coming from both characters toward one another. Gleeson is imposing and frightening, but can turn on a dime, whereas Fassbender makes Chad more charming and lively than his father. The rest of the cast features Lyndsey Marshal, Rory Kinnear, Sean Harris, Gerard Kearns, Killian Scott and Barry Keoghan, all of whom do well with the West Country dialect they spout in the film.
Screenwriter Alistair Siddons has worked as a director throughout his career, and ‘Trespass Against Us’ was borne out of a documentary he made, and saw a narrative feature in the subjects. The dialogue is presented in a Glocestershire accent – which all of the actors manage well – and this gives a warmth and a charm to the characters, as they stay true to their roots and who they are Siddons makes sure that the audience knows the Culter family is one that operates as though the law doesn’t apply to them, and it is the threat of the family breaking down under pressures from the law and from the inside that creates much of the tension within the story. As well as this, Siddons has fun with the characters who want to be better people within society, and make sure that their kids have better lives than them, but aren’t always sure how to break free.
Director Adam Smith coaxes strong performances from Fassbender and Gleeson, almost constantly pitting these two very similar men against one another. The set pieces are carefully directed, and the cat and mouse game played between police and the family, as well as within the family, are well drawn on screen. ‘Trespass Against Us’ is well paced and the characters created in such a manner that it is hard not to root for this band of uneducated outlaws who are constantly at war with themselves and the police.
In all, ‘Trespass Against Us’ is a tightly scripted family drama that has a lot of heart, but plenty of frustrations. Fassbender and Gleeson lead the cast ably, and the film cements Adam Smith as a director to watch out for.
RATING: 4/5
Review by Brogen Hayes