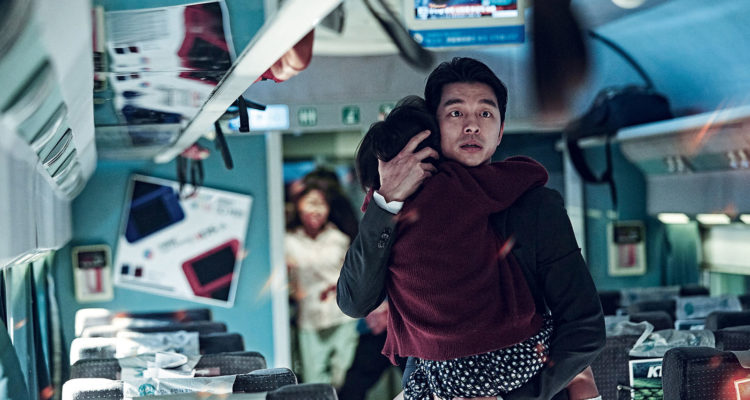 TRAIN TO BUSAN (South Korea/Light House/118mins)
Directed by: Sang-ho Yeon. Starring Yoo Gong, Soo-an Kim, Yu-mi Jeong, Dong-seok Ma, Woo-sik Choi.
THE PLOT: Seok Woo (Yoo Gong) and his young daughter Soo-an (Soo-an Kim) board the Korean high speed train to traveql from Seoul to Busan, where Soo-an’s mother lives. As the train pulls out of the station a young woman boards showing some unusual symptoms, and it is not long before a zombie outbreak takes over the train, and shines a spotlight on the true personalities of the people on the journey to safety.
THE VERDICT: ‘Train to Busan’ screened at the Cannes Film Festival earlier this year, Our of Competition in the Midnight Screenings selection, and it is easy to see why. Director Sang-ho Yeon’s first live action movie is a high-speed race for survival that does not shy away from violence, but has some truly touching moments. Already tipped for US and French remakes, ‘Train to Busan’ is the most thrilling zombie flick you will see this year.
Yoo Gong leads the cast as Seok Woo the uptight father of Soo-an, a man who does not have time for his family as he is too focused on his job. Gong is strong in the role and obviously has fun with the action elements of the film. Soo-an Kim’s character feels more like a plot point and motivation for Seok Woo for most of the film, but she has some truly wonderful moments during the final act of the film, which show off her skills as a young actress. The rest of the cast features Yu-mi Jeong, Dong-seok Ma, Woo-sik Choi, Sohee and Eui-sung Kim.
Sang-ho Yeon’s screenplay follows the zombie movie conventions we have come to expect from the genre, but the addition of the train makes the film feel more urgent and frightening. The carriages in the train provide safe harbour or rooms of death, and it is as the characters make their way through the train that their fate is sealed. The screenplay also sheds a light on the arrogance of some of the characters, as they would rather throw others to the wolves than take the risk of falling foul of their humanity. There are times when the story seems to run out of steam, but there are some of the most thrilling and heartbreaking zombie transformations ever seen on screen in ‘Train to Busan’.
As director Sang-ho Yeon keeps the action going for most of the film, starting the zombie outbreak early, and without pages and pages of dialogue explaining what happened. We are as much trapped on the train as the characters are, and it is in their race to survive that the thrills of the film come clear. There are times when the story stumbles slightly, particularly in the final act, where things begin to feel rather drawn out and slow. The set pieces are thrilling and fast paced, and these are some of the most terrifying zombies we have seen on the big screen since ’28 Days Later’; fast and focused.
In all, ‘Train to Busan’ is a non-stop thrill ride that runs out of steam from time to time. The performances and relationships between the characters are strong, and there are plenty of characters to root for, and plenty to hate. ‘Train to Busan’ breathes new life into the zombie film genre, and makes survival thrilling, touching and often heartbreaking.
RATING: 4/5
Review by Brogen Hayes