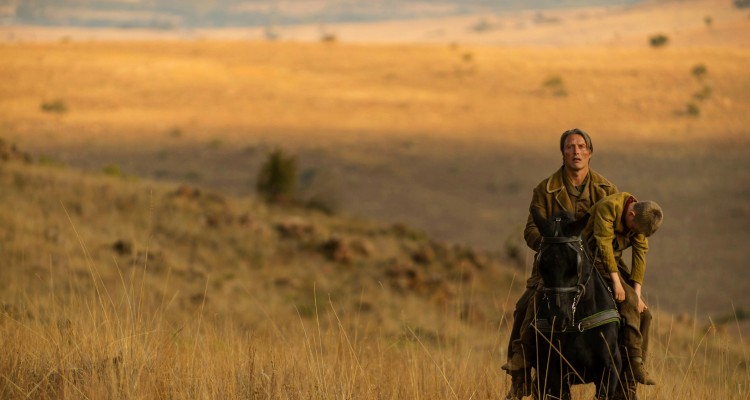 THE PLOT: In 1870s America, Danish settler Jon (Mads Mikkelsen) welcomes his wife Marie (Nanna Øland Fabricius) and son to the township where he has made them a home. On the way to their house, however, the family is set upon by violent and ruthless men who rape Marie and murder both her and her son. Overcome with grief, Jon takes his revenge, but soon realises he has incurred the wrath of vicious gang leader Delarue (Jeffrey Dean Morgan). When the townsfolk refuse to aid Jon, he is forced to take on the outlaws on his own.

THE VERDICT: THE SALVATION is a rather simple Western that doesn’t really add anything new to the genre, but it is also beautifully shot, and gleefully violent. Mads Mikkelsen is on wonderful form as Jon, a man of few words but strong loyalties. Mikkelsen’s cold stare is a joy to behold, and he is the lynchpin that holds the violent but entertaining film together.

Elsewhere, Eva Green cultivates a cold stare of her own as a woman whose tongue was cut out by Indians. Although she has no dialogue in the film, Green makes Madelaine a strong and powerful woman, whose emotion is conveyed through her gaze alone. Jonathan Pryce rounds out the former Bond baddies as the town’s mayor, Keane and is on strong form as the cowardly and weak man. The rest of the cast is made up of Eric Cantona, Jeffrey Dean Morgan and Mikael Persbrandt in a role that was originally intended for Mikkelsen’s brother Lars.

Anders Thomas Jensen and Kristian Levring’s screenplay is not one that is filled with surprises; in fact, The Salvation feels rather familiar in its tone and story. There are nice touches here and there, but the film’s story is not what makes it strong.
As director, Kristian Levring allows tensions to ebb and flow throughout the film, bringing things to a head rather quickly, then allowing escape and recapture to punctuate the rest of the film. Levring has coaxed strong and powerful performances from his cast, and the final set piece, although supremely violent and rather silly, is incredibly well shot and is gleefully daft.

In all, THE SALVATION could be just another Western, but it is elevated by strong performances from Green and Mikkelsen. The film is beautifully shot, and the final set piece is a thing of violent joy, and if there is one lesson to be taken from the film, it’s never be smug while smoking a cigar. You’ll see what I mean.