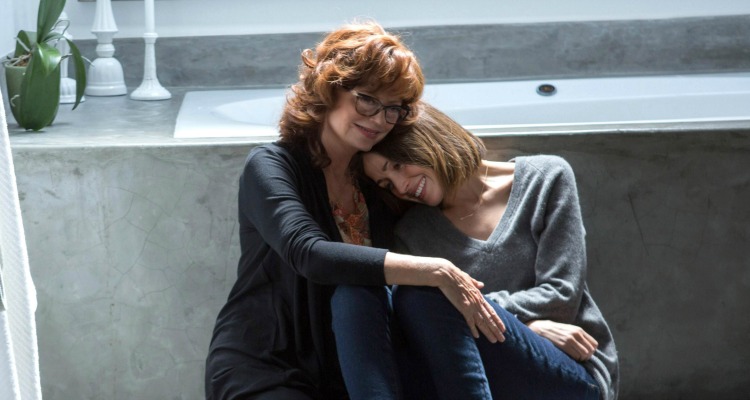 THE MEDDLER – REVIEW (USA/12A/100mins)
Directed by Lorene Scafaria. Starring Susan Sarandon, Rose Byrne, J.K. Simmons, Michael McKean, Casey Wilson.
THE PLOT: Marnie (Susan Sarandon) has just moved to LA to be closer to her daughter Lori (Rose Byrne). Although Marnie insists all the time that “basically I feel great!”, it soon becomes clear, from her constant voicemails to her daughter and the fact that she crashes parties and spends her money on anyone but herself, that the recent death of her husband has left her at a loss. When her daughter goes to New York for work, Marnie finds herself alone in LA for the first time, and struggling to make real connections.

THE VERDICT:
‘The Meddler’ is the first film from writer/director Lorene Scafaria in almost four years – her last being Seeking a Friend for the End of the World – and not only does the film feel rather like a companion piece to the excellent Lily Tomlin film Grandma, but also as though it is a subject close to Scafaria’s heart.
Susan Sarandon leads the cast here, and the whole film entirely depends on her performance as Marnie. Chewing a New Jersey accent to charming effect, and playing a character whose loss and grief are not so far from the surface, Sarandon makes Marnie a character many of us will recognise; the over bearing mother who is just trying to help but somehow ends up making everything worse. Sarandon makes the character relatable and sweet, while allowing her despair and loneliness to be glimpsed through the cracks in her emotional armour. Rose Byrne has a smaller role as Marnie’s exasperated daughter Lori, and it is a role that again, is recognisable, as Lori tries her best to have her own life while trying not to offend her mother. J.K. Simmons plays a smaller role as Zipper, a gentle and kind man intrigued by Marnie but struggling with his own issues when it comes to his kids. Michael McKean, Cecily Strong, Casey Wilson and Jerrod Carmichael turn up in supporting roles.

Lorene Scafaria’s screenplay is really the examination of what people do to come to terms with the death of their spouses or life partners. Marnie’s loneliness is palpable, and much of her dialogue feels real and instantly recognisable for any adult whose relationship with their parents has changed. There are times when it feels as though the film is drifting from scene to scene with no real throughline or over arcing plot, as well as a tendency to rely on songs to hammer home emotion or, in some cases, convey it entirely. This is not totally surprising since Seeking a Friend for the End of the World similarly relied on music, but these moments are shaken off by the second half of the film, and when Marnie finally begins to let her walls down and we get a glimpse of true emotion, the film is strong and affecting. The moments of humour also work well, and there is a warmth and sweetness that permeates the entire film.
As director, Lorene Scafaria coaxes strong performances from her cast, and Susan Sarandon easily carries the film with her heartfelt performance. There are times when the pacing of the film struggles and feels as though it needs a kick in the right direction to get it moving again; while it is fun to spend time with these characters, there does need to be a strong feel that the story is moving. That said, the relationships between the characters feel real and the deeper emotions of Marnie that are slowly revealed keep the audience engaged throughout the film.
In all, ‘The Meddler’ is carried by Susan Sarandon’s wonderful lead performance as a woman struggling to find a new way to live her life after her husband died. Rose Byrne and J.K. Simmons do well in their roles and, although there are times when the pacing suffers and the film as a whole relies rather heavily on songs to convey emotion, there is a sweet and warm heart to ‘The Meddler’, and a character that many of us will recognise.