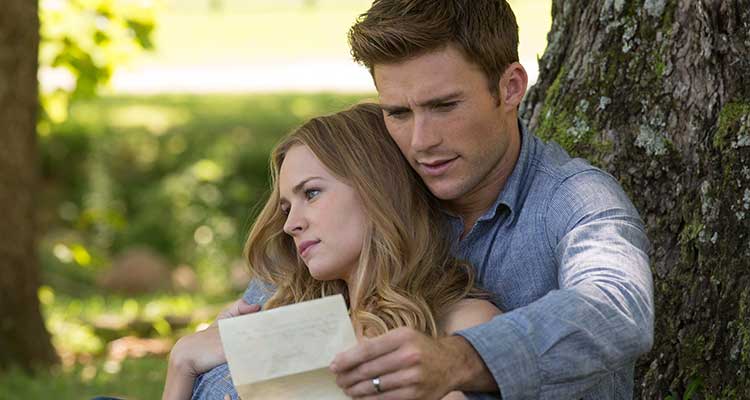 THE LONGEST RIDE (USA/12A/139 min)
Directed by George Tillman Jr. Starring Britt Robertson, Alan Alda, Scott Eastwood, Jack Huston, Oona Chaplin.
THE PLOT: On their first date, college student Sophia (Britt Robertson) and bull rider Luke (Scott Eastwood) rescue an elderly man from a car crash. Sophia befriends Ira (Alan Alda) and, through reading old letters aloud to him, learns of his relationship with Ruth (Oona Chaplin) and finds a way to make her relationship with Luke work.
THE VERDICT: Britt Robertson does a fine job of playing headstrong city girl, and Luke Eastwood treads the line between Southern charm and misogyny very carefully. Both are fine in their roles and they are fine together on screen; the chemistry is not crackling, but they at least look as though they could stand to be in the same room as one another. Alan Alda brings a little gravitas to a film that desperately needs it, but is never really given a chance to be anything other than a vehicle for the story – as opposed to a fully rounded character. The rest of the cast is made up of Oona Chaplin, Jack Huston and Melissa Benoist.
Craig Bolotin adapted Sparks’ book for the big screen, and has created a film with two love stories, neither of which is particularly interesting. As always with a Sparks story, there is a star crossed couple who are fighting to be together, and this time, there is another one in the past, and the two stories intertwine. Both are highly melodramatic when there is no need for it, and neither one is particularly satisfying. The script is filled with cliché and exposition, and the box of letters written by Ira to his wife make little to no sense, since he is writing to her about the time they spent together, days after the events. OK, I can accept the story needed to be told for Sophia and Luke’s benefit, but there is no explanation as to why Ira does this weird journaling experiment.
As director, George Tillman Jr. – who previously brought us the Biggie Smalls story NOTORIOUS – plays up the melodrama and the overblown romances, and never really gives the characters the chance to be anything close to fully rounded or realised. As well as this, there are some heavy-handed music choices that seem to be used to substitute for emotion on screen, or to hammer it home.
In all, THE LONGEST RIDE is far too long, overblown and heavy handed. Two romantic stories are shoehorned in, but neither one is particularly engaging, although both are melodramatic. If you’ve seen THE NOTEBOOK, SAFE HAVEN, or any of the Nicholas Sparks adaptations that have made it to the big screen, then you know what’s in store here.
RATING: 1/5
Review by Brogen Hayes