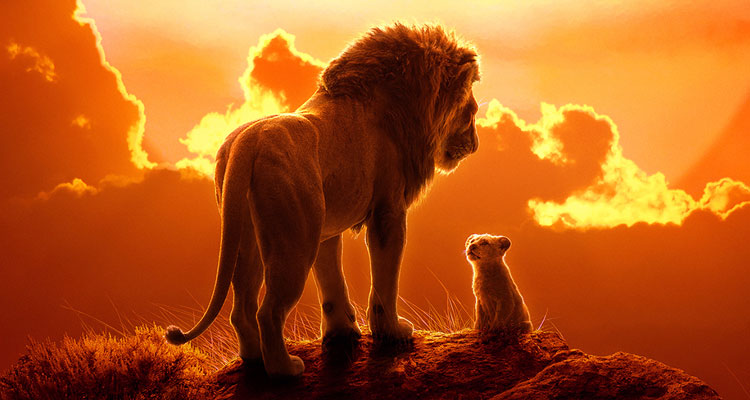 The Plot: In the wilds of Africa, lion Mufasa (James Earl Jones) rules his kingdom in peace. He is preparing his young son Simba (JD McCrary) for the line of succession. However, his jealous brother Scar (Chiwetel Ejiofor) wants the throne for himself. Scar plots with a bunch of wild hyenas to overthrow Mufasa. This leaves Simba cast as an exile, where he is rescued by Timon (Billy Eichner) and Pumbaa (Seth Rogen). Some time later, the now fully-grown Simba (Donald Glover) is enjoying life in the wild with his new friends. However, the time has come when he must face up to his lineage and the legacy of his great father…

The Verdict: As they dig deeper into their treasure trove of animated classics for a live-action remake, Disney have plucked out one of their crown jewels. Now it’s the turn of 1994’s beloved The Lion King, which has been given it a 21st Century makeover. Unlike Aladdin, Dumbo and Disney’s other recent efforts, it’s not so much a remake as a re-interpretation. Yes, the plot is faithful to the original and plays itself out shot-for-shot at times (particularly the beginning and the ending, but it would be hard to top those triumphant, beautiful sequences anyway). Yes, it’s still animation… but not quite what you expect from modern animation.

Director Jon Favreau utilises the same cutting-edge performance capture technology that he used on the new version of The Jungle Book to lend the film a photo-real quality. The characters look so real, perhaps too real, that it blurs the ever-narrowing boundaries between live-action and CGI animation. The technology has developed so far now that what we see is almost indistinguishable from the real thing. This is where the re-interpretation angle comes in. The original The Lion King was very much an animated film, with wild angles and distinct characterisation backed up by suitably elevated voice performances (Jeremy Irons’ voice as Scar was literally dripping with preening menace). But just like the elaborate and jaw-dropping Broadway show that the film spawned, the story (a loose re-working of Hamlet) is just too good to exist in one format only.

The photo-real quality of the film allows the cinemagoer to view the story in a new perspective, as if you have a front-row seat to the story rather than at the distance of a traditionally-animated film. There are advantages and disadvantages to this of course. On the plus side, it allows Favreau to show his wildlife environments in stunning detail, down to the smallest insects and blades of grass. It’s a feast for the eyes and ears. On the down side, the look of the film lacks the vivid lighting and deep, heightened reds of the original. It’s less of a tone piece and more of a think piece, as Favreau uses the extra length (half an hour longer than the original) to explore the psychology of Simba and Scar’s bubbling conflict. While some viewers may find deja vu setting in, waiting for their favourite sequences to roll around (often involving scene-stealing sidekicks Timon and Pumbaa), others might find something new to discover here. Something deeper and more resonant than the original.

In that sense, The Lion King 2019 justifies its existence. It doesn’t come across as a money-grabbing exercise, at least to this reviewer. Like any good re-interpretation, it gives you those crowd-pleasing moments but knows when to push your buttons and get an emotional reaction too (the death of a certain character being more tragic this time). That, combined with an excellent voice cast and just four returning collaborators (James Earl Jones, Elton John, Tim Rice and Hans Zimmer) ensures that the passing of the torch is done both respectfully and with its own sense of purpose. This lion roars loud and clear, giving a new spin on a familiar tale / tail. It works, plain and simple – only on a different level to the original. And what eye candy too, giving the story a brand new look but still keeping faithful to it. Hakuna matata indeed.