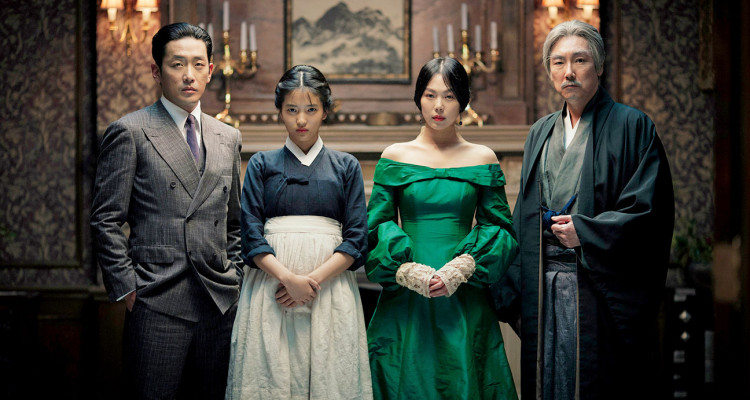 THE HANDMAIDEN (South Korea/TBC/141mins)
Directed by Park Chan Wook. Starring Kim Tae-Ri, Kim Min-hee, Ha Jung-Woo, Cho Jin-woong, Moon So-ri.
THE PLOT: In 1930s Korea Sookee (Kim Tae-ri) is sent to work in the house of a wealthy Japanese man, as handmaiden to the woman he intends to marry – Hideko (Kim Min-hee), his dead wife’s niece. All is not as it seems however, as Sookee is actually working on a scam with a con-man pretending to be a Count (Ha Jung-Woo), who intends to marry HER, have her committed and take all of her money. What Sookee and the Count don’t know, however, is that Hideko has a plan of her own.
THE VERDICT: Based on the novel ‘Fingersmith’ by Sarah Waters, and screening In Competition at the Cannes Film Festival, Park Chan-Wook’s examination of love and betrayal in the 1930s, is sumptuous, romantic and full of twists and turns; and even though the film has a whopping 2 hour 25 minute running time, this is almost justified by the winding story told, which keeps audience interest throughout.
The cast is led by Kim Tae-ri as Sookee, and she is great in the role of the outwardly hardy, but inwardly gentle and caring Sookee. Kim Tae-ri makes the character sweet and vulnerable, and since she is so consumed with the secret she is keeping, it doesn’t occur to her that others have secrets of their own. Kim Min-hee is luminous in the role of Hideko. Once again, her performance at the start of the film is something of a misdirect, and it is in the second hour that this actress gets her true chance to shine as a manipulative woman with a softer side. The rest of the cast features Ha Jung-Woo, Cho Jin-woong and Moon So-ri.
The screenplay, adapted from Waters’ book and transported to 1930s Korea by Chung Seo-kyung and Park Chan-wook, is carefully constructed to be surprising throughout the film. The plot constructed by the Count moves at lightning speed, leaving the audience wondering just what is to happen for the remainder of the film, but this is a film divided into three parts; the first is Sookee’s story, the second Hikedo and the third brings everything together. The restart of the story is initially jarring – and this is where the pacing of the film drops – but this is eventually clawed back, and the film only suffers slightly.
As director, Park Chan-wook makes ‘The Handmaiden’ engaging and immersive – slight missteps in pacing aside – and directs his cast to wonderful and strong performances; it is they that make this twisted tale of love and betrayal work as well as it does. The film, as mentioned, is well paced for the most part, although the restart does make a jarring change and the film struggles slightly to recover. That said, the film is beautifully shot, designed and costumes, making the world of ‘The Handmaiden’ feel real, immersive, fun and incredibly sexy.
In all, ‘The Handmaiden’ is a beautiful work from Park Chan-wook, the story is engaging, beautiful and a lot of fun, the film looks great and the performances are strong. Aside from a small stumble in pacing, ‘The Handmaiden’ is a delight.
RATING: 4/5
Review by Brogen Hayes