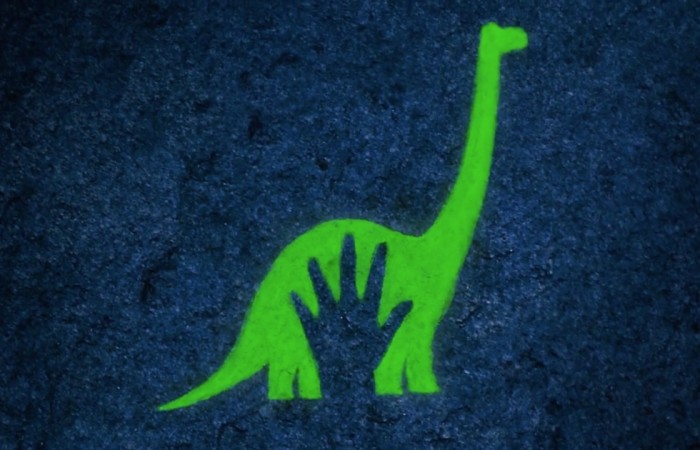 THE GOOD DINOSAUR (USA/PG/100mins)
Directed by Peter Sohn. Starring the voices of Jeffrey Wright, Frances McDormand, Jack Bright, Raymond Ochoa, Steve Zahn, Peter Sohn.
THE PLOT: What if, 65 million years ago, that meteor shower missed our little blue planet, and the dinosaurs just kept on evolving? And what if, a few million years later, these dinos had evolved enough to farm small patches of land in Marlboro country, using their noses to plough the fields, and building stone-walled pits to store their corn?
Well, wonder no more, my fat friends, for that’s where we quickly find ourselves here, with Poppa (voiced by Wright) and Momma (McDormand) the proud parents of three cute little stereotype kids. The shy and awkward one, Arlo (Ochoa), soon finds himself on a long, soul-searching journey home after he gets swept away by the river – and this not long after he witnessed his father drown. Befriending the little human critter (Bright) who sparked the chase that led to his father’s death, Arlo learns all sorts of life lessons as he slowly makes his way home across land…
THE VERDICT: Are you ready to be heartbroken? Well, not quite heartbroken. If it had been made by any other studio, ‘The Good Dinosaur’ would be a fine, funny, inoffensive animated family film, the result of some desperate marketing executive deciding that ‘The Lion King’ would be better told with hillbilly dinosaurs. But, this is Pixar, animation’s Beatles, and having just got back on the horse with Pete Doctor’s incredible ‘Inside Out’, it seems almost perverse that a film as traditional and derivative as ‘The Good Dinosaur’ would come next, from the studio behind ‘Toy Story’, ‘Finding Nemo’, ‘The Incredibles’ and so many other modern animated classics.
Mind you, this is the studio that also gave us ‘Cars 2’. And ‘Cars’. And ‘Monsters University’. And the almost-great-but-not-quite Brave. But, hey, every Beatles is allowed a Magical Mystery Tour, or two. Just don’t give us sequels to such so-so offerings.
Mind you, it’s highly unlikely we’ll witness another round of ‘The Good Dinosaur’, a film that looks fine but never quite fantastic, and has jsut about enough decent gags (every Irish mother is pretty much a Dreamcrusher) to keep you chucking for half an hour. Just about.
The fact that the photorealistic reproductions of Wyoming and Montana are populated here by distinctly rubbery, unphotorealistic dinosaurs is an odd artistic choice too. These dinos look like they’re only halfway through the rendering process.
So, yeah, this is Bonanza with Brontasauruses, a mildly bizarre John Ford’s ‘Jurassic Park’ mash-up, and it will most likely keep the young’uns happy. But, for animation fans, this will be more Don Bluth than Pixar. Maybe Mater just dreamt the whole thing…?
RATING: 3/5
Review by Paul Byrne