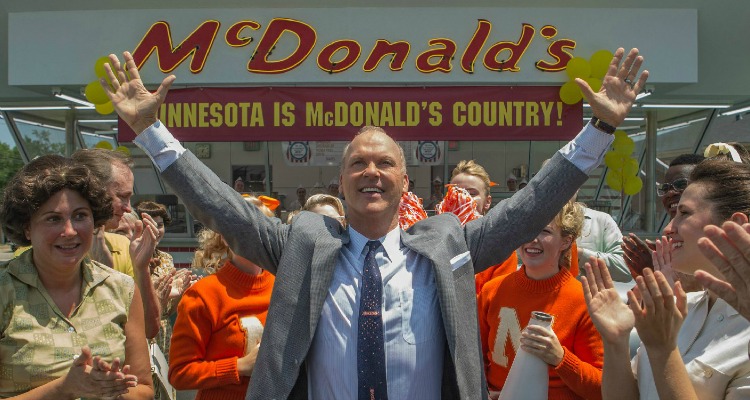 THE FOUNDER (USA/12A/115mins)
Directed by John Lee Hancock. Starring Michael Keaton, Nick Offerman, John Carroll Lynch, Laura Dern, BJ Novak
THE PLOT: In 1954, as he struggled to make a living from selling milkshake machines to diners, Ray Kroc (Michael Keaton) stumbles across a fast food stand called McDonald’s, run by brothers Mac (John Carroll Lynch) and Dick (Nick Offerman) McDonald. Kroc was so impressed by the McDonald brothers’ revolutionary fast food concept that he joined the company with a view to franchising across the US. It was not long, however, before Kroc had some ideas of his own, ideas that the McDonald brothers were not fans of.
THE VERDICT: ‘The Founder’ is a fascinating look behind the scenes of McDonald’s, a company that was started to be a family establishment, and which the McDonald brothers did not want to expand far. How the company went on to be a global brand is a fascinating one, and the story of the man who made this happen, is a careful look at am ambitious and persistent man ruthlessly getting what he wants.
Michael Keaton leads the cast as the charming, tenacious and slightly eccentric Ray Kroc. Keaton’s performance is truly remarkable, as Kroc is a man who draws audience sympathy throughout the first half of the film, but becomes repugnant as times goes on. The genius of Keaton’s performance is that it is not easy to pinpoint when this change happens, which makes Kroc an intriguing and repellent character. Nick Offerman plays Dick McDonald as a gentle but business savvy man who, as it becomes clear, has more of an emotional attachment to the franchise that bears his name than ta first thought. John Carroll Lynch makes Mac McDonald a lot more outgoing, cheery and affable than his brother, but there is a vulnerability to both men that makes them relatable, and has the audience rooting for them almost from the off. The rest of the cast features Laura Dern, B.J. Novak and Patrick Wilson.
Robert D. Siegel’s screenplay is an examination of capitalism, charm and ruthlessness. The setting just so happens to be McDonald’s, as this is a true story, but it so easily could be set in any business at all. The film is carefully written to show Ray Kroc in his best and worst lights, and get the audience on side with the rather naïve and vulnerable McDonald brothers from the start. The dialogue is strong, although there are times when the film’s intrigue flags, and it is not always clear whose story we are watching; Kroc’s or McDonald’s.
Director John Lee Hancock has told overly sentimental stories in the past – I am looking at you, The Blind Side – but he manages to make ‘The Founder’ a tale of tenacity and greed, that shows Ray Kroc rather like a boulder rolling downhill toward the unsuspecting McDonald brothers. The performances in the film are exquisite, with Keaton, Carroll Lynch and Offerman doing career best work, but the pacing and dramatic build of the film is not always as engrossing as it should be.
In all, ‘The Founder’ is a fascinating and horrifying tale of the all-American brand that took over the world, from humble beginnings as a family business. Michael Keaton, John Carroll Lynch and Nick Offerman are wonderful, the script strong, and there are some beautifully shot moments throughout the film, although there are also times when the pacing and dramatic flow of ‘The Founder’ is not quite right. That said, ‘The Founder’ is intriguing and horrifying, and Keaton makes this small story one of life and death.
RATING: 4/5
Review by Brogen Hayes