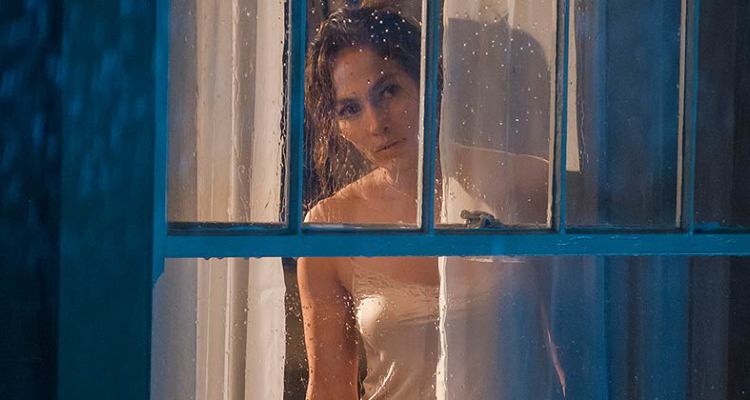 The Boy Next Door

THE BOY NEXT DOOR (USA/16/91mins)
Directed by Rob Cohen. Starring Jennifer Lopez, Ryan Guzman, John Corbett, Kristen Chenoweth
THE PLOT: Claire (Jennifer Lopez) is a single mother who becomes infatuated with her much younger neighbour Noah (Ryan Guzman). After the two fall into bed, however, Claire realises that the act was a mistake, pushing Noah away. Unfortunately for Claire, however, Noah does not take rejection lightly and sets out to either win Claire back, or destroy her.
THE VERDICT: There are some films out there that are so terrible that they actually come full circle, and venture back into the realm of entertainment – stand up and take a bow, ROADHOUSE – but sadly for J-Lo, THE BOY NEXT DOOR is not one of these. It’s just bad.
Jennifer Lopez looks absolutely stunning as Claire, but sadly for anyone who is interested in Reese Witherspoon’s #AskHerMore campaign, there is not a lot else going on here, although Lopez has a good scaredy face, which she uses a lot here. Ryan Guzman takes a leaf out of Rebecca DuMornay’s book, and goes full stalker – a lá The Hand That Rocks The Cradle – with little reason or explanation. John Corbett turns up as a cheatin’ husband turned good, Kristen Chenoweth plays the outspoken best friend and Ian Nelson plays Claire’s son Kevin.
Barbara Curry wrote the screenplay, which basically sets Lopez’s character up as an intelligent and beautiful woman, then spends the next hour breaking her down and slut-shaming her. As well as this, the screenplay makes Lopez out to be physically weak, and weak willed, although the sex scene conveniently hovers on the edge of rape (‘No stop’, ‘You know you want it’. UGH), which gets the audience back on Lopez’s side… Or it is supposed to, anyway. Add to this some of the most cringe worthy dialogue heard on screen since Fifty Shades of Grey, characters whose emotions and loyalties turn on a dime and THE BOY NEXT DOOR goes from thriller to unintentional, awkward and slightly confusing laugh riot.
Directed by Rob Cohen, THE BOY NEXT DOOR s a film filled with mixed messages, over the top performances that are not over the top enough, fitted with a tag line that supposedly explains away Noah’s actions since he is in the throes of an obsession he ‘can’t control’. Oh that’s OK then. There is perhaps the hint of the idea that The Boy Next Door is supposed to be a feminist parable, but making the lead character weak in every sense of the word, the villain a psychotic rapist and would-be murderer does not make Claire a feminist icon for standing up to him, it makes her a human being with an instinct to survive.
In all, THE BOY NEXT DOOR is offensive to women, to men and basically to anyone who could want to go and see it. The film starts off looking like a Diet Coke ad of old, then turns silly – how can there be a first edition of ‘The Illiad’!? – but still somehow manages not to be bad enough to be entertaining.
RATING: 1/5
Review by Brogen Hayes