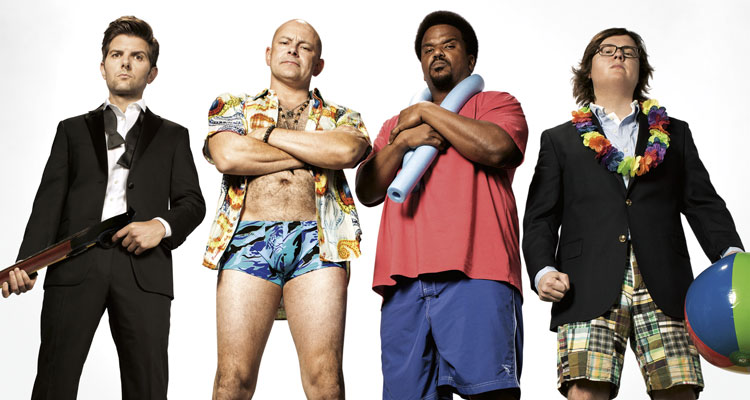 We take a look at cool time travel vehicles…

A Jacuzzi might be the oddest type of time machine but it’s also the most hilarious. What could be more fun than travelling through time in a tub full of bubbles with your mates and arriving at your destination squeaky clean? The sequel hits Irish cinemas this month and see’s the well-scrubbed team travel back and forth through time to fix one mistake.
With the Jacuzzi from HOT TUB TIME MACHINE in mind, we took a look back at other cool coveyances from time travel movies…

Displacement Sphere – THE TERMINATOR
Parodied over and over again, the Time Displacement technology used in THE TERMINATOR is only capable of a one-way trip, presumably this is to stop Kyle going back to the future to have a catch-up with his BFF, who now rather awkwardly is his son. The Time Displacement Sphere can’t send clothes back, so time travellers have to rely on electrical sparks to cover their modesty… Who’s looking forward to seeing a 67 year old Arnie naked this summer? Anyone?

The Time Machine – THE TIME MACHINE
The prize for prettiest time machine on the list goes to H. G. Wells contraption, first published in 1895 many sci-fi experts consider this to the be the father of time travel (or is that a grandfather paradox?). Well’s classic design was originally seen on the big screen in 1960 then again in the misjudged 2002 remake… we’re sure Samantha Mumba would love a real life time machine to try erase that film from her CV.

WABAC Machine – MR PEABODY & SHERMAN
Pronounced “way-back”, this time travelling device first appeared in the 1960’s during THE ROCKY & BULLWINKLE SHOW and more recently in last years’ seriously under-rated MR PEABODY & SHERMAN movie. This time machine’s name is a pun on early computers such as UNIVAC & ENIAC and the term “Way-Back Machine” is now used in real-life by Wikipedia and the official Internet Archive.

Police Box – THE DOCTOR WHO MOVIE
The Timelord has had feature-length outings in the past with Peter Cushing in 1965 and Paul McGann in 1996, more recently the 50th anniversary and Peter Capaldi’s premiere both screened in cinemas. The TARDIS (an old police box), which famously is bigger on the inside, has gained cult status as one of the definitive time machine.

Phone Booth – BILL AND TED’S EXCELLENT ADVENTURE
Released in 1989, when Keanu Reeves was a cheeky youngster, BILL AND TED’S EXCELLENT ADVENTURE made time-travel cool and single-handedly launched a host of crazy catchphrases that have since been lost to the annals of history. TRIUMPHANT! It became successful enough to launch it’s own animated cartoon show and it’s own breakfast serial. There have been talks of a BILL AND TED revival for years, Reeves said he’s seen a script and the upcoming movie will be a sequel not a reboot.

The Time Turner – HARRY POTTER & THE PRISONER OF AZKABAN
Most time machines are science based, who knew that time-travel is also possible with magic? Harry Potter’s clever-clogs student Hermione (Emma Watson) knew, and used a magical time-turner (a necklace with an hourglass attached) to make all of her classes on time. Other magicians suspected of using time-travel include Paul Daniels, who might have used a time turner to woo a wife half his age.

Jet Engine Wormhole – DONNIE DARKO
The most confusing film about time travel until INTERSTELLAR came along… There is so much going on in DONNIE DARKO; visions, mental health issues, arson and a giant rabbit named Frank. Our brain hurts just thinking about it!

The Box – PRIMER
Due to this being made on a tiny budget, the time-travelling device used here is simply a mere no-frills box… but don’t let that fool you. PRIMER is the biggest head- scratcher movie on the list, this is hard-core time travel that you might need a degree in engineering to fully understand (Or a Stephen Hawking book to hand), even after multiple viewings you might not know what’s going on, but you’ll love trying.

The DeLorean – BACK TO THE FUTURE
The most iconic movie time machine could have been a fridge! Filmmaker Robert Zemeckis originally conceived BACK TO THE FUTURE with a time-travelling fridge, but was afraid kids would climb into their own fridges after seeing the film. Instead the Belfast made DeLorean went on to gain cult status with movie fans around the world.