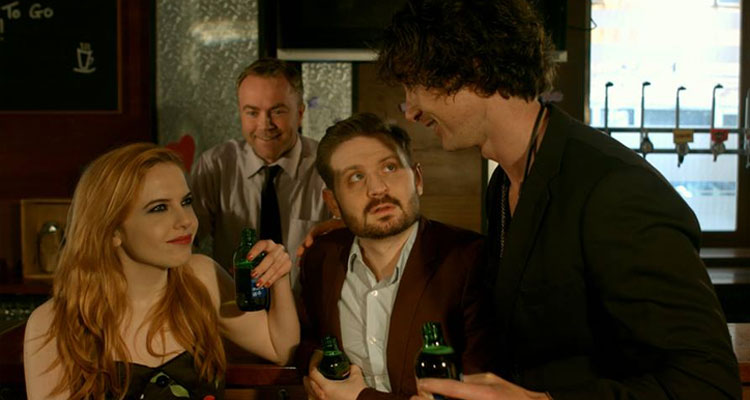 The Plot: It’s another day in Dublin sex shop Thank You Come Again. It’s run by Fergus (John Billy Kenerk), whose girlfriend is embarrassed by his job; Dillon (John Sweeney), who aspires of becoming a filmmaker by mashing together his own 4-hour version of Star Wars and Titanic; and Mary (Dannii Byrne) who has a new man in her life. Over the course of the day, they’ll encounter new job applicants, a doubting priest (Fabien Oman), some dodgy customers, Gardai and valuable African blood diamonds…

The Verdict: It’s been a long time coming for Dublin-set comedy Thank You Come Again. This low-budget, mostly self-funded film by director Stephen Clarke Dune and co-writer / actor John Sweeney began shooting in 2014 but suffered various mishaps along the way. However, it’s finally crawled out from under those messy bedsheets and found its way into cinemas. It’s perhaps a small miracle that it managed to do so, as this isn’t the type of film that normally gets a cinema release. It has a random, stitched-together feel that varies wildly from being quite good to quite poor, mixing the disparate plot elements together for a bawdy comedy that somehow works. Only just though.

At its core it’s a knockabout, day-in-the-life comedy that is set in, of all places, a sex shop. The idea came from Dunne and Sweeney walking past a Dublin sex shop one day and thought it would make a great place for a comedy. The influence of Kevin Smith and his slacker comedies can be felt early on in the workplace banter between our central trio of characters – with a  Dublin flavour of course. They’re a likeable trio, prone to juvenile pranks on each and having a go at customers too. Throughout the day, the plot returns to the shop for the latest banter in between a series of seemingly unrelated sub-plots. There’s a young priest in crisis. A teenager is berated by his God-fearing mother for his lustful thoughts. An office worker has to deal with her bitchy boss from hell. The boss from hell is missing an important item. An aging sales rep who tried for a job interview in the shop drowns his sorrows in a pint.

If that all sounds rather random, then it’s meant to be. The sub-plots seem like a series of television comedy sketches that have nothing to do with the central plot. A whisper of a plot kicks in when the blood diamonds are discovered, but it’s not until the last half hour that everything comes together for a hilarious, satisfying climax. Until then, the viewer is treading water waiting for something, anything to happen that might drive the plot forward. There’s a lot of tease going on here, which can be frustrating for a while. You want to get to the good, money-shot stuff, but Dunne sure takes his time getting there. A film like this shouldn’t be longer than 90 minutes either. However, Dunne juggles these various plot threads and holds them together through a good use of his limited locations and actors.

Though, it has to be said that the acting swings spectacularly here – from pretty decent (the central trio, who are a hoot) to Razzie-level bad (just about everyone else). This reviewer is unsure as to whether this was intentional on Dunne’s part, as it threatens to tip the film into so-bad-it’s-good territory. Thankfully, it doesn’t. For a film with sex on the brain, it’s rather modest – the characters just talk about it, rather than do it. Still, there’s a very relaxed, knockabout quality to Thank You Come Again that grudgingly holds your attention. It would make a good TV series at some point, which is presumably the intention. There are some simple pleasures to be had here, but don’t look too closely under the sheets.