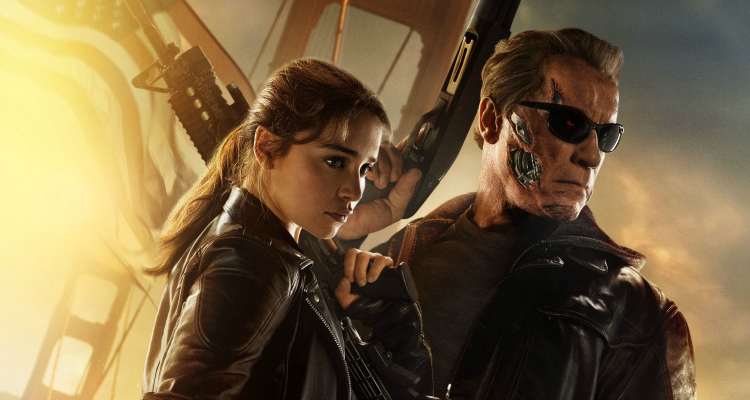 TERMINATOR GENISYS (USA/12A/125mins)
Directed by Alan Taylor. Starring Emilia Clarke, Jason Clarke, Arnold Scharzenegger, Jai Courtney, J.K. Simmons, Matthew Smith.
THE PLOT: As the fight against Skynet draws to a violent end, the machines send the Terminator (Arnold Schwarzenegger) back in time to stop John Connor (Jason Clarke) from ever being born. The humans send Kyle Reese (Jai Courtney) back to 1984 to protect Sarah Connor (Emilia Clarke), but when he arrives there, Sarah is all too aware of her role in the battle against the machines, and nothing is as Reese expected it to be.
THE VERDICT: Another week, another blockbuster; this week it’s the turn of TERMINATOR GENISYS to take over our movie screens. The good news is that it is a helluva lot better than TERMINATOR SALVATION, but the bad news is that that’s not saying much.
The cast do their jobs well enough here; Emilia Clarke makes Sarah Connor tough and no-nonsense, Jai Courtney is loyal and only slightly misogynistic as Kyle Reese, Jason Clarke takes John Connor in a new direction entirely, but the show is stolen by Arnold Schwarzenegger as a kindly Terminator, sworn to protect Sarah Connor. Schwarzenegger provides much of the levity and comedy in the film, while keeping the Terminator monosyllabic and strong. Matthew Smith and JK Simmons turn up briefly, and both are completely underused.
Laeta Kalogridis and Patrick Lussier’s screenplay starts off well enough, with call backs to the original 1984 film, and a fleeting shot for shot remake of the opening sequence, but once it starts trying to be the BACK TO THE FUTURE II of TERMINATOR movies, and goes even further with the crossing timelines and to-ing and fro-ing through time, the pacing of the film suffers and the audience begins to pull holes in the film. As well as this, this film completely resets the canon of the TERMINATOR franchise; something that definitely did not need to happen.
Director Alan Taylor, who most recently brought us THOR 2: THE DARK WORLD, starts the film well enough, but once the timelines get tangled and everyone is jumping around through time, clarity is lost and the pacing of the film suffers as a result. As well as this, there are times when the CGI in the film looks so shaky that it at first seems to be a reference to the 1984 level of special effects, but it later becomes clear that most of the budget was used on just one character. That said, there are some brilliant comedic moments thanks to Schwarzenegger, and the action is explosive, silly and fun.
In all, TERMINATOR GENISYS gets caught up in its own timelines and myth, and tangled up the original franchise while trying to create a new one. Most of the cast are fine, but Schwarzenegger stands out and brings some much-needed levity to proceedings. A new, unnecessary franchise is surely on the cards, but there needs to be some clarity brought to the events of this film for that to work properly. Oh, and it seems Matt Smith wants to be called Matthew Smith now…
RATING: 3/5
Review by Brogen Hayes