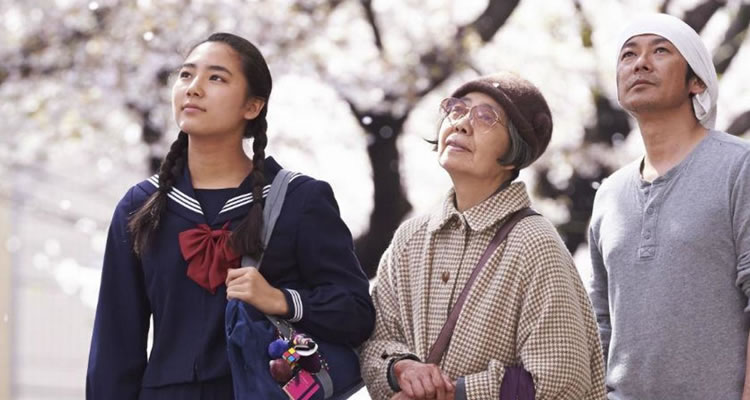 SWEET BEAN (Japan | France | Germany/TBC/113mins)
Directed by Naomi Kawase. Starring Kirin Kiki, Masatoshi Nagase, Kyara Uchida, Miki Mizuno, Miu Takeuchi.
THE PLOT: Naomi Kawase’s film focuses on a Doraki stand – sweet bean paste (an) sandwiched between two pancakes. Sentaro (Nagase Masatoshi) runs the stand and has always bought the paste in bulk. When an elderly woman shows up at the stand looking for work and offering her recipe for an, the two find they have a lot more in common than they first thought.
THE PLOT: At almost 2 hours long, ‘Sweet Bean’ is not a film that gets to its point quickly, but it is a sweet tale of three people coming together under the most unlikely circumstances, and finding common ground. Nagase Masatoshi plays the man who runs the Doraki stand, and it is clear that this is a man who has removed himself from society intentionally, and is tortured by the events that drove him to do so. Kiki Kirin plays Tokue, the woman who mysteriously offers her recipe for the sweet paste. Kirin makes the character seem like a simpleton at first, but it becomes clear, as time goes on, that she simply looks at the world differently than her surly boss.
Director Naomi Kawase adapted the screenplay from Durian Sukegawa’s novel, and although the message of the film is sweet, and it is a pleasure to spend time with the characters as they get closer, and heir loyalty deepens, there are times when cooking as metaphor for life – in general, slow down and pay attention – takes too much of the film’s time, leaving the pacing to grind to a halt. As well as this, the intention of the film is relatively clear, and having Kirin hammer the point home with a voiceover at the end feels a little like overkill.
Kawase, as director, has created a film about friendship and acceptance, while also examining the phenomenon of leprosy in Japan, and the social stigma that still surrounds the disease. The performances in the film are strong, but the narrow focus on cooking means that the pacing is often toturous. That said, when it all comes together in the final act (before the twee) voiceover, it is clear that ‘Sweet Bean’ is a sweet little film about acceptance and life.
In all, ‘Sweet Bean’ is a film that allows those who are invisible in society – either by choice or not – to be seen by one another, and of course, the audience. The performances are strong, but the pacing is often painful, and the final voiceover of the film is just a step too far in hammering the point home.
RATING: 3/5
Review by Brogen Hayes