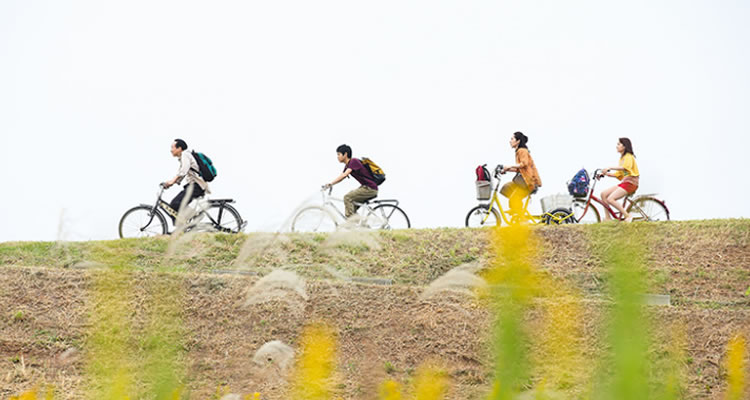 SURVIVAL FAMILY (Japan/TBC/117mins)
Directed by Shinobu Yaguci. Starring Fumiyo Kohinata, Eri Fukatsu, Yuki Izumisawa, Wakana Aoi
THE PLOT: The Suzuki family are an average household in Tokyo; their lives dominated by technology, daughter and son rarely engage with their parents, and father often spends more time watching TV than talking with his wife. When all electricity in their apartment goes out – including battery operated technology – the family soon realise that this is a problem that spreads potentially as far as Osaka and beyond. After several weeks without power, the family decide to grab their bikes and cycle across country to their grandfather’s home in Kagoshima, but the journey ahead is more perilous than any of the family first realised.
THE VERDICT: From Shinobu Taguci, director of the farcial and hilarious ‘Wood Job!’ in 2014, comes a change of pace; an examination of one family’s reliance on electricity, and the character traits that emerge in them when society begins to break down.
The cast features Fumiyo Kohinata, Eri Fukatsu, Yuki Izumisawa and Wakana Aoi as the Suzuki family – father, mother, son and daughter respectively – and they provide a strong and engaging ensemble performance as a family. Individually, Kohinata makes the patriarch of the family a rather bumbling man, who has great ideas but little follow through; Fukatsu makes the mother of the family the one who holds everything together, playing the character with a quiet dignity and strength. Aoi obviously has fun with playing the young daughter of the family; obsessed with her phone and her social standing, which is gradually stripped away, showing the warm and interesting person beneath the surface. Izumisawa makes the son of the family a typical teenage by to begin with; disconnected from his family but all too connected with the world through a screen, and it is interesting to watch this be stripped away, even down to the character cutting up his phone case to help repair his bike.
Shinobu Taguci focuses on the family at the heart of the film, making ‘Survival Family’ a truly personal tale, and one that the audience can easily relate to. It would be easy for the film to turn into a preachy tale about society’s over reliance on technology, but instead, ‘Survival Family’ is truly a story of survival against the odds, and coming together as a family in order to do so. There are some fun lines of dialogue throughout the film, and a careful balance between drama and comedy that manages not to undermine the harrowing journey that the family goes on, and the hardships they face along the way.
As director, Taguci makes the characters seem almost like caricatures of people within Japanese culture; the workaholic Dad, the housewife, the sullen teen boy and the whiny teen girl – but as the film develops, he allows these characters to grow and develop into smart and fully rounded people, even as he throws hell after hell at them. There are some choices made toward the end of the film that slightly undermine the strength of this family tale – including a twee and preachy credits song – but there is a lot to love in this gentle yet harrowing tale of the apocalypse the Suzukis never thought would happen.
In all, ‘Survival Family’ is a warm tale that goes from the familiar to the unexpected, while never preaching to the audience, or relying on horror in order to be horrific. The cast are strong and the pacing engaging, but ending the film three minutes earlier could have made for a punchier and more impactful ending.
RATING: 4/5
Review by Brogen Hayes