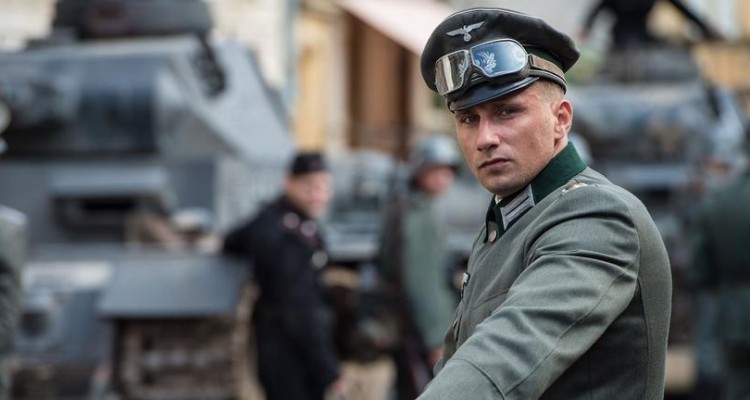 THE PLOT: In 1940, the small town of Boussy is, at first, unaffected by the conflict in Europe, but when Parisian exiles arrive in the town, along with German occupying forces, things rapidly change. Romance quickly blossoms between Lucile (Michelle Williams) and German soldier Bruno van Falk (Matthias Schoenaerts), who is installed in the home Lucile shares with her mother-in-law Madame Angelier (Kristin Scott Thomas). When a French man is accused of murdering a German solider, however, the relationships between the people of the town begin to change.

THE VERDICT: The story behind SUITE FRANCAISE is almost more interesting than the tale itself; written during the time it is set, Suite Francaise lay undiscovered among her things after author, Jewish French Irène Némirovsky, was interred in Auschwitz, where she died. Némirovsky’s daughter Denise believed the notebook to be a diary of her mother’s, and that it would be too upsetting to read, until she arranged to donate her mother’s papers to a French archive in 1998. It was then that Denise read the notebook, discovered two novels written in miniscule handwriting, and had it published in France. Quite the remarkable tale. The trouble is that SUITE FRANCAISE may have been a remarkable tale itself, at the time it was written, but in the years since it was lost, it seems the tale has been told many times over.

Michelle Williams takes on the lead role of Lucile in SUITE FRANCAISE, and she does fine in the role; she never quite sets the screen alight, but she is remarkably less insipid than she has been in the past. Matthias Schoenaerts carries on his streak of playing commanding roles, and makes Bruno both gentle and relatable, as well as intimidating and frightening. Kristen Scott Thomas continues her run of playing scary women incredibly well, Ruth Wilson plays a woman whose husband cannot go to war, but is unable to defend her or himself, Sam Riley takes on the role of a man on the run and Margot Robbie plays a feisty young woman who tries to see past the uniforms of the men who have invaded her home.

Story-wise, SUITE FRANCAISE is remarkably peaceful for a film set during World War II, but the love story between occupied and occupier is one we have seen on screen many times before. The connection between Lucile and Bruno feels a little like Stockholm Syndrome crossed with a notion that Bruno is not bad, he’s just misunderstood. Of course, friction has to come into the mix somewhere, and it arrives in the form of unfaithful spouses, slutty townsfolk and a truly unpleasant member of the German army. None of this feels in any way new, but it is still a well-told tale that is engaging on screen.

Director Saul Dibb – who also adapted the story for the screen, and whose last film was the Kiera Knightley vehicle THE DUCHESS – keeps the sets as pretty as possible, and the invading force as benign as possible. The real conflict comes from within the townsfolk as they come to terms with the reality of war, but a war that is still far over the hill and far away. The performances are fine, with a standout from Schoenaerts, but this is a story of romance set against a backdrop of conflict so, while the film is engaging enough to justify its running time, it is really nothing new or anything that we haven’t seen before.

In all, SUITE FRANCAISE is a well-told romantic drama full of conflict and tension. Schoenaerts shines, Kristin Scott Thomas does scary well, but this is a pretty tale about love in the time of war, and plays as such.