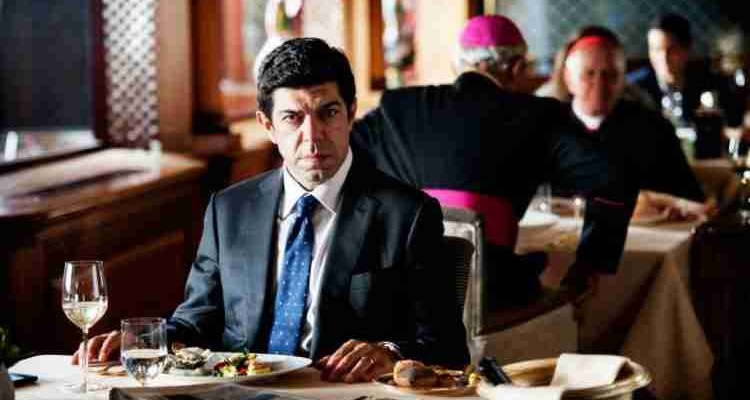 SUBURRA (Italy/France/Club/130mins)
Directed by Stefano Sollima. Starring Pierfrancesco Pavino, Greta Scarano, Jean-Hughes Anglade, Elio Germano, Giulia Gorietti, Claudio Amendola.
THE PLOT: Rome, and a crooked MP (Pavino) would love to see the Ostia waterfront turned into Las Vegas. Firstly though, he’s got to deal with an annoying little blackmailer who’s threatening to reveal that messy underage prostitute death in the MP’s hotel room. So, naturally, our boy takes out a hit. Which turns messy. Spectacularly messy.
And just to add conflict to the soul into the mix, Pope Benedict XVI has decided to get off the thrown. Holy.
THE VERDICT: It’s taken a little while for this Italian gangster hit to make it to our big screens, ‘Suburra’ – just like the acclaimed ‘Gomorrah’ – having proven a major hit in its native country before getting the go-ahead as a TV series.
And, hey, wouldn’t you know it, it’s the same director, Stefano Sollima having also director Romanzo Criminale and the subtly-titled feature A.C.A.B. (All Cops Are Bastards).
Once again, he’s exploring the underbelly of contemporary Italian life, and once again, it’s packed with violence, corruption, hot chicks and more than a dabble of comedy. Setting all the action against the backdrop of Pope Benidorm abdicating just adds another layer of absurdity to proceedings.
One of those outings where you pretty much know what you’re going to get. Which, in the case of Stefano Sollima, is a very good thing indeed.
RATING: 4/5
Review by Paul Byrne