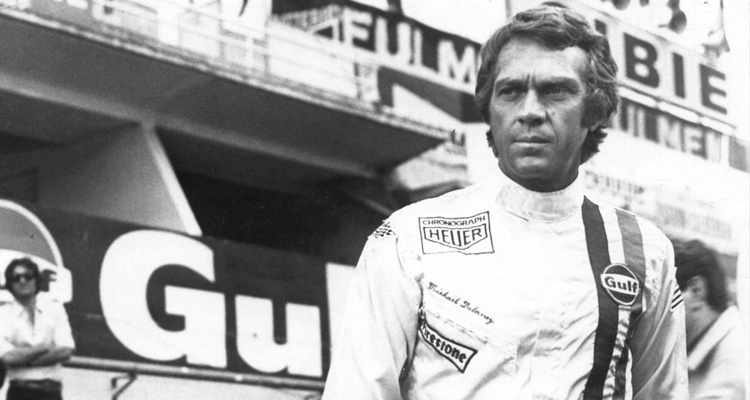 STEVE MCQUEEN: THE MAN & LE MANS (USA | UK/IFI/102mins)
Directed by Gabriel Clarke and John McKenna.
THE PLOT: Directors Gabriel Clarke and John McKenna delve behind the scenes of Steve McQueen’s passion project, ‘Le Mans’. The film, shot in 1970 and released in 1971, was intended to be McQueen’s love letter to race-car driving, but the lack of a script led to the film going $1.5 million over budget, being delayed by months, and original director John Sturges walking off the project. For the first time, audiences get to find out what exactly went wrong.
THE VERDICT: There have long been rumours and accounts that Steve McQueen was difficult to work with, and this new documentary does nothing to dissuade audiences of that notion. ‘Steve McQueen: The Man & Le Mans’ starts off with examining just how ‘Le Mans’ came to be, and why Steve McQueen wanted to be a producer on the project – in short; control. It is precisely this control that led to the film being a financial and dramatic disaster, and the turning point in McQueen’s marriage and his love for racing.
According to legend, over 1 million feet of film were shot for Le Mans, but were presumed missing or destroyed. Somehow, the filmmakers behind this documentary got their hands on it, and it is this that forms the backbone of the film. The rest of the story is told through the eyes of those who were there at the time (or their children), including McQueen’s wife at the time Neile Adams McQueen, their son Chad McQueen, McQueen’s mechanic Haig Altounian, screenwriter Alan Trustman and racing drivers Derek Bell, Jonathan Williams and David Piper, the latter of whom lost part of his leg after an accident during filming.
The story that emerges is one of passion and control; there is little doubt that Le Mans was a film that McQueen felt strongly about, but it was precisely this love that led to him being unable to surrender to the original director John Sturges to walk off the film. As well as this, the film examines the Hollywood system at the time that le mans was made; according to the documentary, it was not uncommon for a film to start shooting without a script, but McQueen constantly turned down those offered to him – eventually ending the writing career of Alan Trustman, who says after he refused to write the film the way McQueen wanted ‘the phone stopped ringing’ – and more than six weeks into the shoot, there was still no script to be seen. Although this may not necessarily be new information about McQueen – the rumours of him being unpleasant to work with are consistent – but the idea that as a star, he held so much power that this was able to go on for several weeks is definitely a surprise. Add to this, McQueen’s marriage falling apart and his fear that the Manson Family was out to get him after the murder of Sharon Tate and her friends, and the man who was steering the ship was seemingly in no fit state to do so.
In all, ‘Steve McQueen: The Man & Le Mans’ is a film for the fans of McQueen and his doomed passion project, as well as those with a curiosity about the movie business. The footage uncovered of the shoot is incredible, the interviews are engaging and seemingly honest, but there are times when ‘Steve McQueen: The Man & Le Mans’ meanders as much as ‘Le Mans’ does, and although the information is interesting and the storytelling engaging, a tighter edit and some faster pacing may have led to a stronger film.
RATING: 3.5/5
Review by Brogen Hayes