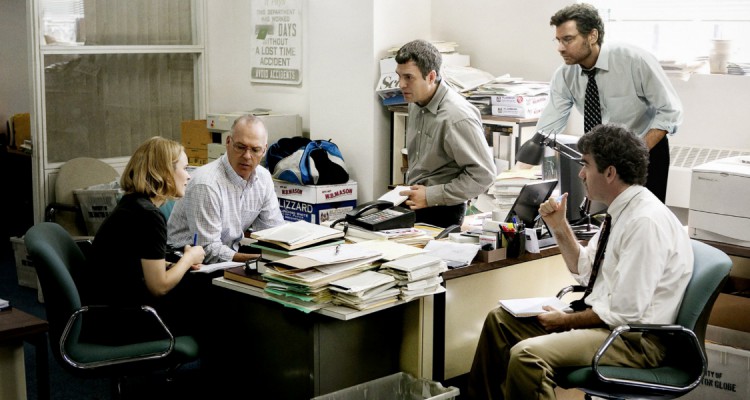 With four Oscar nominations, Tom McCarthy can be assured a big audience for his Catholic Church-busting Spotlight. Paul Byrne pulls up a pew.

Basically All The President’s Men meets a far more dangerous breed of Men In Black, Spotlight charts the Boston Globe’s uncovering of systematic abuse by the Catholic Church there back at the turn of the century. Despite a stellar ensemble cast – including Mark Ruffalo, Michael Keaton, Rachel McAdams, Liev Schreiber and Stanley Tucci – and the lure of a true-life story that sent shockwaves around the world, on paper, Spotlight is a hard sell. Do people really want to go through the Catholic Church’s dirty laundry once again? Haven’t we defeated the Death Star already?

The six Oscar nominations – including Best Picture and Best Director – means that Spotlight will undoubtedly find a bigger audience now, and as to the neutering of the Catholic Church, well, a loud belief in the Almighty God is still the must-have accessory for any politician running for office in the US.

So, in America – and many other parts of the world – the Bible-thumpers have the power. To get their vote, you just gotta promise to thump the right people. In the name of God.

When I sat down with Tom McCarthy – co-writer and director of Spotlight – in Dublin recently, this good Irish-American Catholic was well aware of the increasingly complex role religion is playing, not only in America, but around the world. Still, let’s open with some good news first.

Six Oscar nominations pretty much guarantees you an audience here, far more than perhaps all those glowring reviews could have imagined. Is Spotlight the film you set out to make, or did you have any Road To The Multiplex moments along the way…?

I think every film evolves as you make it, changing a little here, maybe a lot there. You kind of dig in with your initial impulses on a film, and many times that shifts as you’re working on it, because it happens over a period of time. Specifically with a movie like Spotlight, I think there were a lot of avenues down which to explore this film. Obviously, there was the procedeural investigation, there was the story of the courage of the survivors, and also there’s the story of the complicity – if not the complicity, the deference – of the entire city. How does this happen on such an systemic level without people knowing about it, and seemingly look the other way. And that theme is what transcended everything else for me when telling the story, and made it incredibly relevant today. The story of social complicity and deference – how do these things happen without us saying enough? So, I think I was initially compelled by Marty Baron coming to The Globe, an outsider editor – the first outsider editor – from Miami, of the Jewish faith, taking over a local iconic paper, in arguably the most Irish-American capital of American cities, and having this incredible impact. In a sense, setting his sights on the Catholic church.

You grew up in New Providence, New Jersey, in a good Catholic family, of which there are many in America. Were you concerned about that big chunk of the US being offended here, especially on a personal level – people telling you that it’s all in the past, and we should move on?

I’ve heard that, even from contemporaries, and it surprised me – Catholic friends saying to me, ‘Do we really need to tell this story again?’, to which I reply, ‘Absolutely, yes! This story is still being told, there are still survivors coping with what they went through, and there are survivors who have not come forward yet. This is a major crime that happened all over the world’. So, there was absolutely no question in my mind that this story needed to be told. Did it concern me though? Of course. I come from a very Catholic family, and I care about them, and I care about the Catholic community. I understand that the Catholic church do a lot of wonderful things for people around the world, but you have to always weight and leverage those two things against one another. And in this particular instance, it seemed clear to me that this was a story worth telling.

These Catholic priests are a very different kind of Men In Black – you haven’t had any strange men in long black dresses parked across the street from your house, getting their beads ready to wrap around your neck, have you…?

No [laughs], not that I’ve noticed, but that is an element that we could have probably used in telling this story. It did feel at times like, can we find an evil monk, or someone really cool like that? But no, the church, when we were making the movie, remained quite silent. Since its release, by and large – from what I can tell – they’ve been supportive of the movie, and have had some very positive things to say about Spotlight, in some cases. I also, personally, that certain churches, certain priests, have told people not to bother seeing this movie – ‘It’s chicanery, it’s the same old thing’. There are extemists on both sides,and ultimately, Catholics in America have been very supportive of the movie, and very responsive, and that’s exciting.

There’s no God? Didn’t quite factor that in, no. Look, I don’t believe necessarily in simple good and bad, black and white. I think there are sometimes extreme cases of that, but in this story, I think there are a lot of good people on both sides of the issue. And that’s what makes it so difficult to deal with, to root out and solve this particular crisis. So, I think it’s an incredibly complicated, nuanced issue, and, as I said, there are a lot of very good Catholics who want to move beyond this. And they feel equally betrayed by what happened, on an institutional level, with this crisis. Because, in a sense, as we mentioned in the movie, it’s not just physical abuse, it’s spiritual abuse. And there are a lot of people who rely on their faith to get through the day. In a sense, when something like this is unearthed, it robs them of that. So, I think for me as a filmmaker, as a storyteller, the hope here is that this film will promote discussion. My one thing is, people don’t like to talk about this. Why would you? It’s a very ugly issue. It’s best just not to talk about it. Where would you talk about it? At the breakfast table? Do you want to go out for a drink and discuss it? No. There’s no time to talk about it – this will hopefully get people talking about it.

Wonderful work in front of and behind the camera – writing and directing the likes of The Station Agent and The Visitor, co-writing Pixar’s Up, taking the lead in the last season of The Wire, and on and on. The idea of commercial appeal with a film like Spotlight is something you’d be well aware of then – there are those who will see this as homework…

You always worry about that as a filmmaker. Ultimately, we don’t make it because we’re interested in making it – we make these films for audiences. I think we made Spotlight because we felt we had a really compelling story in the investigation here, and people would respond to that. Look, we put together an amazing cast that goes beyond the faces on the poster, and the fact that we’ve done really well in the US already is really exciting. Because, look, I think there are a lot of wonderful entertainment movies out there – genre movies, sci-fi movies, wonderful movies. Go see them, they’re great escapes. But then there are also movies that make you really talk afterwards, and they’re a great alternative. I happen to like both. And I need both.

I went to Star Wars when I arrived in Dublin yesterday, because I hadn’t had the chance to see it yet, and I had a wonderful two-and-a-half hours in the theatre. But it’s great to have the opportunity to tell a story like this right now. It’s encouraging to see that there are audiences seeking out both kinds of entertainment.

I might have misread his reaction, but, when the trailer for Spotlight played at The Golden Globes, host Ricky Gervais seemed to be dismissive immediately afterwards. Or maybe he was just playing to the crowd?

I think I do remember something… I know he had an ungoing bit throughout the night – and I think he’s a funny guy – that kept suggesting that he didn’t want to be there, or he didn’t quite believe in the awards. He was sort of taking the piss out of the awards all night. Kind of, why are we here? So, I think it was more of a reflection of that rather than the film. Look, I think what’s worked best about the film is that it isn’t homework. We’re not preachy. Ultimately, it’s a really entertaining film. Otherwise, audiences wouldn’t have gone to see it in such numbers.

We have to ask about the Irish connection. Given that you’re multi-talented, and hugely successful, proves you are definitely Irish – do you know where the line goes back to on the old sod? Ballygobackwards, perhaps?

I’ve spent a lot of time in Ballygobackwards. It’s a lovely place. We have tried but we have not been able to trace our roots all the way back. My father was intent on doing it before he passed away, spending a lot of time over here doing that. He managed to track us to a church that burnt to the ground, with all our records inside. So, we’ve never been able to connect the actual dots, which one of my brothers is now intent on doing. Hopefully we’ll have that answer one day.

The fact that your film is up for six Oscars, I’m sure there are a lot of McCarthys all over Ireland trying to join those dots for you.

Someone should come forward, and we can all hug. It’s the only reason I’m here!

Actually, it’s June 7th. That’s imdb. It’s been wrong from the very start, and I’ve never bothered to change it. This way, I get two birthdays.

God bless ‘em. You’re in a good place though, at this halfway mark – happy, or do you have a masterplan that hasn’t fully kicked in yet?

I’m very happy with where I’m at right now, and no, there’s no masterplan. I’m thrilled to be able to do what I do – it’s a great job. If you asked me twenty years ago if I’d like to be where I am now, I would be so happy. I’m pretty lucky…

SPOTLIGHT is at Irish cinemas from Jan 29th