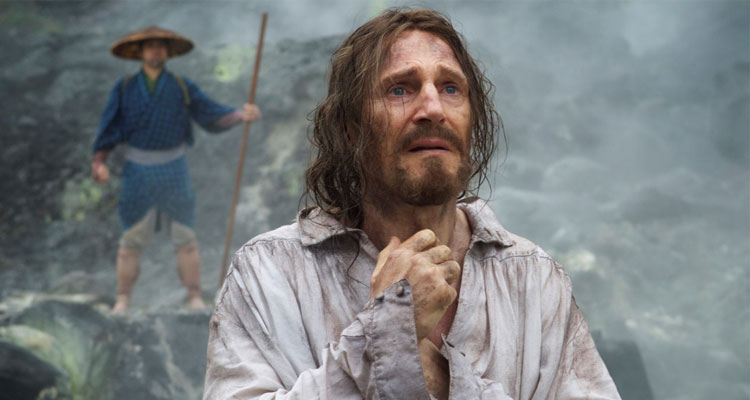 SILENCE (Mexico | Taiwan | USA/15A/161mins)
Directed by Martin Scorsese. Starring Andrew Garfield, Adam Driver, Liam Neeson, Ciarán Hinds, Tadanobu Asano
THE PLOT: Based on Shusaku Endo’s acclaimed 1966 novel (which made it onto Japanese screens in 1971, courtesy of Masahiro Shinooda), ir’s 1643, and two young Jesuit priests, Rodriguez (Garfield) and Garrpe (Driver) are smuggled into Japan. Their mission, to find their MIA mentor, Ferreira (Neeson), the Colonel Kurtz of the piece having reportedly abandoned his faith, turned by Japan’s Edict of Expulsion, designed to ban and eradicate Christianity from its islands.
Anyone found worshipping a foreign deity could expect to face all kinds of medieval torture, but for Rodriguez and Garrpe, and their fresh peasant followers, such dangers are all part of the proving the faith.
Will our idealistic young Jesuits crack under the pressure? Or will they see the light? And is there any real difference between either option…?
THE VERDICT: I realise I’m in a very small minority here (I feel your pain, Rodriguez!), but, try as I might, I couldn’t quite bring myself to believe in ‘Silence’; this was a film that really, really tested my faith in Martin Scorsese.
By the end though, I just couldn’t muster up even a Christopher Moltisanti cheer.
Still, questioning my faith in Scorsese, I knew straight away that was a bad turn, given that the revered filmmaker is a far, far smarter man than me, and one who has, right from his days as an altar boy in St Patrick’s Cathedral in New York and through his darkest, most drug-fuelled days (I feel your pain, Robertson!), struggled to find the true meaning of our Lord in this god-forsaken world of ours.
And yet, I have to admit, the last 17 hours of this film kinda dragged for me. And I couldn’t get over the creeping sense that ‘Silence’ played like a student film that just got out of hand. Or worse, ‘Uncle Boonmee Who Can Recall His Past Lives’ meets ‘The Mission’.
So, forgive me, Father Marty, and everyone else who threw their heart and soul into this ambitious, stubborn, earnest exploration of man’s need for his own religion, for having the biggest god as your invisible best friend. Everyone else sees the Second Coming. I see Kurosawa’s ‘Father Ted’.
RATING: 3/5
Review by Paul Byrne