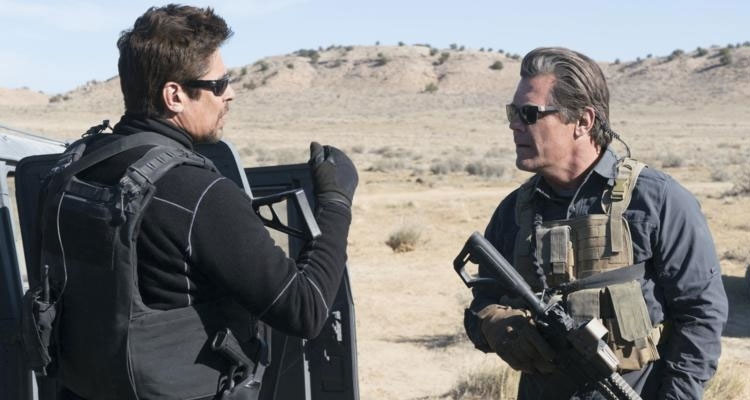 In short: Hits the mark

The Plot: The American war on cross-border Mexican drug cartels is raging on. The new commodity is people, not drugs. It’s time for a new approach, which is where CIA spook Matt (Josh Brolin) comes in. He’s tasked by Secretary of Defense Riley (Matthew Modine) to start a violent war between the drug cartels, in order to distract them from their own engagement with them. Matt puts together his own team, with mercurial hitman Alejandro (Benicio Del Toro) as the secret weapon. They head to Mexico City to kidnap Isabel (Isabela Moner), the feisty teenage daughter of the drug lord responsible for taking out Alejandro’s family. Initially posing as another cartel, Matt and Alejandro find themselves on the thin border between America and Mexico, law and order, life and death…

The Verdict: Denis Villeneuve is certainly a busy man with a lot on his production slate. He very much wanted to direct this Taylor Sheridan-scripted follow-up to his no-nonsense crime hit Sicario. But a certain replicant came calling, so he handed directorial duties over to Italian director Stefano Sollima. Sollima has already made a name for himself on the Gomorrah television series and more notably his Roman crime epic Suburra (worth seeking out). While Sicario 2: Soldado lacks that ultra-polished Villeneuve touch, it’s most definitely a worthy sequel which pushes our characters further and deeper into dangerous territory.

Soldado means soldier, a hint that the sequel is about an escalation of the drug cartel war with Alejandro taking on a dual role. As Matt tells him early on, there are no rules this time and he’s going to start a war – with everyone. At this point, Sollima’s film looks like it’s heading down a certain path that an audience would anticipate. However, things go south (literally) very quickly and the film pursues a bolder, more ambitious direction which twists and turns to the point where not everything is as it seems.

With Emily Blunt’s FBI Agent not returning due to her audience surrogate plot being used up and Alejandro coldly telling her ‘you will not survive here’, the focus shifts very much into a three-hander between Matt, Alejandro and, surprisingly, tough cookie Isabel. The tense dynamic between the three extends beyond another audience surrogate / kidnap victim to instead embrace the idea that a drug lord’s daughter is a born survivor. Newcomer Moner more than holds her own against her veteran co-stars, who are well settled into their roles. Sheridan fleshes out some character aspects of Matt and Alejandro’s personalities in his script. Not too much though. They are men who live in the shade, always watching, always vigilant.

Sollima stages some terrific set-pieces such as the opening kidnap and desolate, desert-bound shoot-outs. They’re brutally efficient takedowns, but Sollima even finds time to throw in a hand grenade gag which works a treat. His strong direction is determined and focused, with pacing to match. As the stakes get ever higher, he amps things up and underscores this with the foreboding score. While Sicario 2: Soldado might not be quite as spectacular as its predecessor, it’s a solid, respectable sequel that hits the mark.