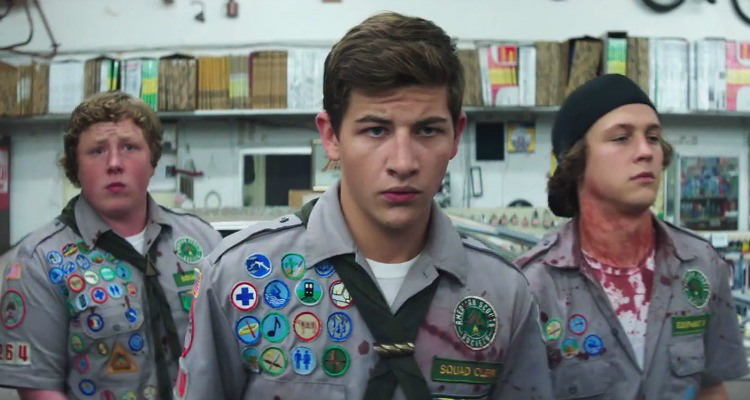 Scouts Guide to the Zombie Apocalypse

SCOUTS GUIDE TO THE ZOMBIE APOCALYPSE (USA/15A/93mins)
Directed by Christopher Landon. Starring Tye Sheridan, Logan Miller, Joey Morgan, David Koechner, Halston Sage, Cloris Leachman.
THE PLOT: We open on Otto The Janitor (or thereabouts), messing around in the school lab when he unleashes a, well, zombie apocalypse just as best friends Ben (Sheridan) and Carter (Miller) try their luck at the liquor store before heading out into the woods for the major scout promotion of their buddy Augie (Morgan). Both know they’re getting a little too old for scouts, but Ben doesn’t quite have the heart to have Augie be the only remaining member of Scout Leader Rogers’ (Koechner) troop. The pull of pretty young girls – and, in particular, Carter’s sister, Kendall (Sage) – is proving pretty darn strong though.
Not that such growing pains really matter when your sleepy town is suddenly overrun with zombies, something the trio only discover after Ben and Carter’s latenight search for a secret party downtown. Soon, they’re hooking up with stripper Denise (Morgan) as they fight for survival, determined to rescue the oblivious Kendall and co at the all-night rave before the American military wipe out the town…
THE VERDICT: Just out in time to miss Halloween, ‘The Scouts Guide To The Zombie Apocalypse’ is the perfect blend of Superbad meets ‘Shaun Of The Dead’, and it really deserves to be one of the breakout hits of the year. As it stands, it’ll probably get buried in the mix, and find itself a cult favourite in years to come.
So, do yourself a great, big, fat favour, and go see it on the big screen while you can.
It’s not difficult to see what drew the likes of David Koechner (a man with a nose for smart comedies) and Cloris Leachman (think Betty White with tattoos) would be drawn to Christopher Landon’s clever and very often hilarious script. Having cut his fangs writing a bunch of Paranormal Activity sequels (and directing 2014’s ‘The Marked Ones’), Landon hits that rich vein between horror and comedy here, and he hits it hard. There are scenes here that are Farrelly Brothers-worthy, and every bit as funny.
The casting is spot-on too, with Tye Sheridan (‘Mud’, ‘Joe’, ‘The Tree Of Life’) clearly bound for Hollywood glory. Playing Scott Summers/Cyclops in next year’s ‘X-Men Apocalpyse’ – should help seal the deal.
A perfectly-formed little comedy horror.
RATING: 5/5
Review by Paul Byrne