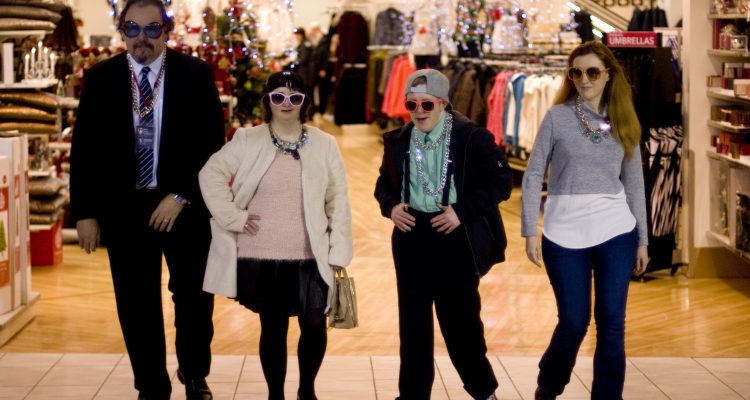 SANCTUARY (Ireland/15A/86mins)
Directed by Len Collin. Starring Amy-Joyce Hastins, Tara Breathnach, Christopher Dunne, Kieran Coppinger and Charlene Kelly
THE PLOT: Larry (Kieran Coppinger) and Sophie (Charlene Kelly), two young people with intellectual disabilities, slip away from a group outing to the cinema and, with the help of their carer Tom (Robert Doherty), spend the afternoon together in a Galway hotel. Little do the two young lovebirds know that everyone outside the walls of their sanctuary is looking for them.
THE VERDICT: Based on a play by the Galway-based Blue Teapot Theatre Company, and adapted from one of the Company’s plays, ‘Sanctuary’ is not only sweet and funny, but it touches on issues faced by some of the most invisible people in Irish society today.
The cast do a great job with their roles, although it is probably fair to say that these are not the strongest actors ever seen on screen, there is a warmth to the characters and a genuine believability to their performances. The cast features Stephen Marcus, Amy-Joyce Hastins, Tara Breathnach, Christopher Dunne, Kieran Coppinger and Charlene Kelly.
Screenwriter Christian O’Reilly adapted the screenplay from his own stage play, and allows the cast to develop their characters on screen, and it is clear that the stories we see, the vignettes and little moments, are gleaned from their own experiences. There are many touching moments, some laugh out loud funny ones and, as the film goes on, some darker moments that not only give context to why these two young lovebirds cannot be alone together, but the way they are viewed – or ignored – by the world that they live in.
As director, Len Collin allows the film to take on the feel of a caper, and obviously has fun in allowing the actors to interact with one another on screen. There are times when the timeline of the film feels a little garbled, which leads to the running time feeling rather drawn out, but there are some genuinely touching, funny and moving moments throughout the film.
In all, ‘Sanctuary’ is a lovely, ambitious project that is full of charm and a good story that actually discusses issues, albeit slightly superficially. There is plenty to commend ‘Sanctuary’ however, not least the fact that it brings people who are so often overlooked in society to the front and centre of the film.
RATING: 4/5
Review by Brogen Hayes