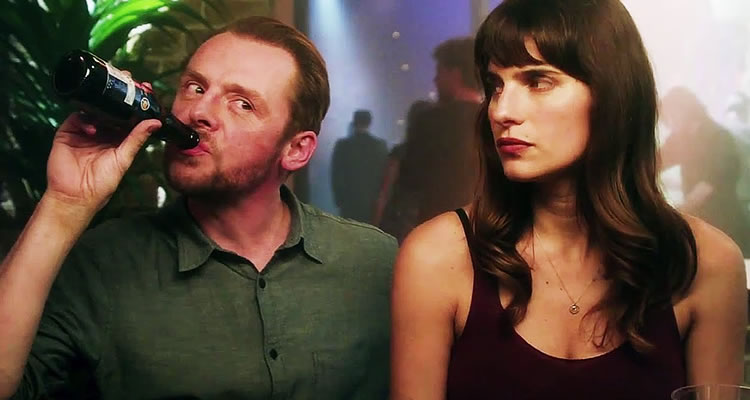 MAN UP (UK | France/15A/88mins)
Directed by Pen Palmer. Starring Simon Pegg, Lake Bell, Rory Kinnear, Ophelia Lovibond, Olivia Williams
THE PLOT: Nancy (Lake Bell) is returning from an engagement party where she was set up on a disastrous blind date when she meets a woman on the train who decides her attitude toward dating is terrible, and leaves her a self help book. As Nancy tries to return the book to the girl at Waterloo Station, she is mistaken for her, by a blind date. Rather than admit the mix up, Nancy decides to go on the date with Jack (Simon Pegg), knowing all too well that this too, could end in disaster.
THE VERDICT: Directed by Ben Palmer – of THE INBETWEENERS fame – Man Up is a film that feels uneven and overly written. Tess Morris’s script is sweet, charming and has a couple of giggles when Jack and Nancy are alone together, but once other characters are added to the equation – Rory Kinnear as Sean, a man with a crush on Nancy since high school, for example – the film suddenly tires too hard to be funny and quirky, and completely misses the mark.
Lake Bell is wonderful as the perennially single, 34 year old Nancy. The character suits Bell as an actress, and she breathes life into Nancy, making her relatable and recognisable. Simon Pegg equally does well as Jack, a divorced man who is trying his best to move on. The two have lovely chemistry together, and it is clear they enjoyed their time on screen. Rory Kinnear struggles with the over the top Sean, however, and Ophelia Lovibond never manages to make Jessica anything other than vanilla.
Tess Morris’ screenplay is filled with wit and charm, but inexplicably goes way over the top at regular intervals through the film, taking the entire shebang from charming and warm, to weird and cringey. Director Ben Palmer tries to compensate for this by making the entire film feel over the top, but it is so obvious that Jack and Nancy have a strong emotional connection, that these lower energy scenes, which form the heart of the film, don’t fit with the manic chaotic atmosphere created by the supporting characters. As well as this, the timeline of the film feels just a little off, and the climactic scene that involves a teenage house party following Jack to Nancy’s house, just feels like a rip off of LOVE, ACTUALLY.
In all, MAN UP would have been a charming little rom-com about mistaken identity if so much of the rest of the film had not been unnecessarily ramped up for the sake of laughs. Bell and Pegg are wonderful together, the soundtrack is fantastic and there is lots to love here, but MAN UP is let down by to much manic action going on in the background, and not enough time spent with the central characters.
RATING: 3/5
Review by Brogen Hayes

SAN ANDREAS (USA/12A/114mins)
Directed by Brad Peyton. Starring Dwayne Johnson, Carla Gugino, Alexandra Daddario, Ioan Gruffudd, Archie Panjabi, Paul Giamatti, Kylie Minogue, Todd Williams, Hugo Johnstone-Burt.
THE PLOT: California finally looks set to fall into the sea after a massive earthquake brings America’s west coast to its knees, with the lucky ones getting to meet ace helicopter pilot Ray (Johnson), whose time flying missions in Afghanistan has come in pretty handy now for search and rescue around Los Angeles. Those benefitting from the big man’s expertise and dynamic personality include his soon-to-be ex-wife, Emma (Gugino) – who’s about to shack up with skyscraper developer Daniel (Gruffudd) – and their teenage daughter, Blake (Daddario), who is getting all tongue-tied and flirty with a Hugh Grant Lite called Ben (Johnstone-Burt). Oh, and the latter has a pain-in-the-ass, wisecracking younger brother, Ollie (Parkinson). Always good to have a main character who the audience actually wants to see perish. Horribly.
Having tried desparately to warn everyone that a hard rain was about to come is knotty professor Lawrence (Giamatti)…
THE VERDICT: If Arnold Schwarzenegger’s career were alive today, it might be making movies like this. Big, bold, traditional, predictable, and just a tiny bit meh.
Still, you’ve got to admire a movie that depicts the massive destruction of California, and yet tries to make the rest of the world actually feel upset. And you can’t help feeling that the three writers here must be Bill Hicks fan – California gets its ass kicked here big time.
Despite all the crash, bang, wallop of SAN ANDREAS though, it very rarely truly thrills. And that’s certainly not the fault of Johnson – this man knows how to do sincere, and he knows how to do tongue-in-cheek. Often at the same time.
I guess if anyone deserves a slap about the head and face, it’s director Brad Peyton, the man who previously gave us CATS & DOGS: THE REVENGE OF KITTY GALORE and JOURNEY 2: THE MYSTERIOUS ISLAND. So, make that three slaps around the head and face.
RATING: 3/5
Review by Paul Byrne

DANNY COLLINS (USA/15A/106mins)
Directed by Dan Fogelman. Starring Al Pacino, Annette Bening, Christopher Plummer, Jennifer Garner, Bobby Cannavale.
THE PLOT: Danny Collins (Al Pacino) is an ageing rocker who still performs, but has never managed to give up the hard partying life of a rockstar. All of this changes when his manager Frank (Christopher Plummer) gives him a latter written by John Lennon, a letter written to Danny at the start of his career, a letter that never got to him until now. Danny dumps his cheating girlfriend and heads to pastures new… New Jersey.
THE VERDICT: Inspired by the true story of English musician Steve Tilston – who did receive a letter from John Lennon 40 years too late – DANNY COLLINS is a film that feels a little familiar, like maybe we have been down this road before. The thing that makes the film warm and entertaining, however, is the feeling that the entire cast, Pacino included, actually had a lot of fun making this charming little film.
Directed by Dan Fogleman, who as a writer most recently brought us LAST VEGAS (and the less said about that the better), this is the directorial debut for the veteran screenwriter. As mentioned, DANNY COLLINS is not exactly a film that feels fresh, new or innovative, but it is a film that is filled with heart and warmth, with strong performances from Al Pacino, Annette Bening, Christopher Plummer, Bobby Canavale and Jennifer Garner filling the film with charm and a couple of laughs.
Fogleman’s screenplay jumps off from a true story and takes it in a new direction. There are times, especially in the scenes concerning Danny’s family, where everything feels a little trite and familiar, but these soon balance out with some lovely chemistry between the cast, and some fun scenes between Pacino and Bening. As the film movies on, it is clear that this is a story about relationships, and not one about the regrets we may have in life, and Fogleman’s dialogue gets better and more honest as the film moves along.
As director, Fogleman sometimes lays the cringiness on a little too thick, but redeems himself when it comes to characters interacting on a more intimate level. There are a couple of montages in there that don’t always work – and don’t always reflect the passage of time – but Fogleman has coaxed a suave performance from Pacino, a giggly understated one from Bening and a strong and charming one from Garner. It is Cannavale that really shines, however, making Tom a complex, rounded and conflicted character; one who is the perfect foil for the vain and sheltered Danny.
In all, it may feel like we are heading down a well-worn path with DANNY COLLINS, but Dan Fogleman’s directorial debut has a few surprises up its sleeve, and a whole lot of warmth and charm. The central four shine, but none more so than Bobby Canavale, who is on the best from he has been for years.
RATING: 3/5
Review by Brogen Hayes

THE CONNECTION (France/Belgium/15A/135mins)
Directed by Cedric Jimenez. Starring Jean Dujardin, Gilles Lellouche, Celine Sallette, Melanie Doutey, Benoit Magimel, Guillaume Gouix.
THE PLOT: Marseilles, 1975, and juvenile-court magistrate Pierre Michel (Dujardin) is being promoted to heading up organised crime investigations. And top of his list, given his experience with young heroin addicts, is apparently untouchable druglord Gaetano Zampa (Lellouche). Progress is slow though, and when a close friend dies of an overdose, Michel decides that it’s time to break a few rules too in order to get his man. Just who is working for whom becomes an issue though as Michel gets closer and closer, the cloud of corruption inside the force being just as much a hindrance as Zampa’s well-oiled elusiveness.
THE VERDICT: Taking place a few years after New York cop Popeye Doyle (Gene Hackman) broke a few rules, and bones, in THE FRENCH CONNECTION double-bill, Jimenez’s beautifully-constructed true-life tale covers another chapter in this decades-long, cross-Atlantic drug-smuggling saga. Jimenez grew up in Marseilles with Michel as a local legend, and his deep-rooted childhood fascination with Michel comes across here, the personal connection seemingly sparking new life into this very familiar genre. It’s a very fair cops and robbers, Guv.
RATING: 4/5
Review by Paul Byrne

TIMBUKTU (France/Mauritania/12A/100mins)
Directed by Abderrahmane Sissako. Starring Ibrahim Ahmed, Abel Jafri, Toulou Kiki, Layla Walet Mohamed, Mehdi A.G. Mohamed, Hichem Yacoubi, Kettly Noel, Fatoumata Diawara.
THE PLOT: The fundamentalists may have taken control of Timbuktu, causing many of their neighbours to flee, but Kidane (Ahmed) and Satima (Kiki) have stayed on, the married couple looking after their 12-year old daughter Toya (Mohamed) and orphan boy Issan (A.G. Mohamed), the latter looking after the family’s eight cows. As the Islamists inflict stricter and stricter rules on the town – such as a ban on “any old thing in a public place” – the natives become increasingly exasperated, and restless. For Kidane and his family, a taste of freedom can be found with a trip into the surrounding desert – where the girls don’t have to cover their heads, and Kidane can play his guitar. Such a volatile existence though means life can take a dark turn on the smallest of pivots…
THE VERDICT: A big hit at Cannes in 2014, this slow, methodical but wry exploration of life during Islamic fundamentalist times manages to convey the horror for those close to the fire and brimstone. That this all takes place in such a beautiful setting makes the madness and the hardship all the more upsetting. There is humour here too, which certainly helps the medicine go down, writer/director Sissako’s delicate balance of tenderness and totem totalitarianism making for a potent kick here.
RATING: 4/5
Review by Paul Byrne