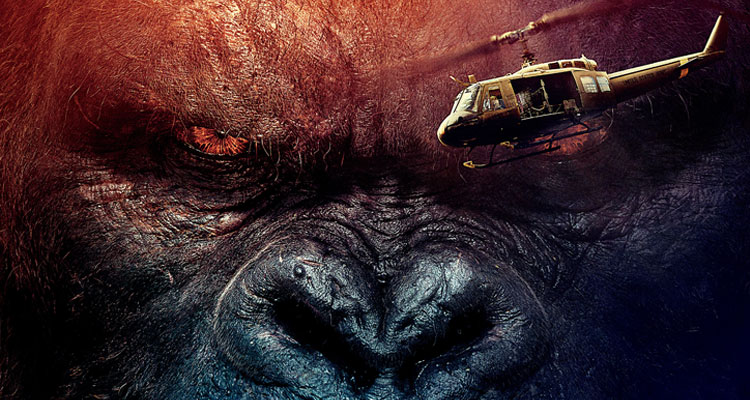 KONG: SKULL ISLAND (USA | Vietnam/12A/118mins)
Directed by Jordan Vogt-Roberts. Starring Brie Larson, John C. Reilly, Tom Hiddleston, Samuel L. Jackson, John Goodman
THE PLOT: In 1975 an expedition led by Bill Randa (John Goodman) journeys to a mysterious island surrounded by perpetual storms, under the guise of exploring one of the last uncharted places on Earth. Accompanied by mercenary James Conrad (Tom Hiddleston), photographer Mason Weaver (Brie Larson) and a squadron from the US military, Randa reaches the island, but the explosions the team sets to complete a geological study incurs the wrath of one of the island’s inhabitants, a giant ape, named Kong.
THE VERDICT: It is hard to believe it has been 12 years since Peter Jackson’s remake of ‘King Kong’, and although ‘Kong: Skull Island’ still tells the story of the giant ape named Kong, this is a very different story to the ones we have seen before, and includes elements of ‘Apocalypse Now’ and ‘Jurassic Park’.
The cast of ‘Kong: Skull Island’ is impressive, with Brie Larson, Samuel L. Jackson, Tom Hiddleston, Toby Kebbell, John C. Reilly, John Goodman and Jason Mitchell all running toward, and away from danger throughout the film. The performances of the cast are solid enough, but since the real star of the story here is Kong – played in motion capture by Terry Notary – the god of the island, living in isolation until the outside world comes calling.
Dan Gilroy and Max Borenstein’s screenplay for ‘Kong: Skull Island’ combines the traditional monster movie with a war film, as the outsiders barrel into Kong’s home and set about upsetting the balance. There are plenty of references to the Vietnam War throughout the film – which provides a backdrop to the story – and the idea that creating an enemy is almost as easy as finding one. There are also references to ‘Apocalypse Now’ throughout the film, both in the feel and the cinematography, and more than one nod to Jurassic Park as the tiny humans find themselves taking on creatures they have never encountered before. There are times, however, when the Vietnam War allegory becomes incredibly heavy handed, and the audience begin to feel as though they are being bashed over the head with it, over and over again. The dialogue in the film is fairly minimal, and what there is of it is not terribly clever, and there are also references to the Kong Vs Godzilla movie that is coming down the line.
As director, Jordan Vogt-Roberts makes ‘Kong: Skull Island’ feel old fashioned in the best of ways; like the tentpole summer movies of old, complete with complicated monster, killer soundtrack, beautiful cinematography and tons of fun to be had. As mentioned, the cast don’t have a whole lot to do but run away and look scared – and it is often difficult to buy Tom Hiddleston as a mercenary for hire – but they run away well, John C. Reilly brings some much needed comedy to proceedings and although the allegory comes off rather strong at times, there is a lot of fun to be had with the film. 3D is not needed though. As usual.
In all, there is a lot of fun to be had with ‘Kong: Skull Island’. The film is not anchored by human performances but each does well, the monsters are complicated and often scary, and the cinematography and soundtrack are especially well handled. A little less allegory and obvious references to films of the past could have made the film stronger, but as it stands, Kong: Skull Island is fun, well paced and exciting.
RATING: 4/5
Review by Brogen Hayes

ELLE (France | Germany | Belgium/18/130mins)
Directed by Paul Verhoeven. Starring Isabelle Huppert, Virginie Efira, Christian Berkel, Laurent Lafitte, Alice Isaaz.
THE PLOT: Michéle (Isabelle Huppert) is violently raped in her home, but reluctant to involve the police since her father committed violent acts when she was a child, she opens up to a few friends, but carries on in her life as though nothing happened. Flirting with a married neighbour and drawing her attacker back to her, Michéle sets in motion a chain of events that will change her life forever.
THE VERDICT: Fans of the director of ‘Showgirls’, ‘Total Recall’ and ‘RoboCop’ have mourned his disappearance from Hollywood in a time where sci-fi films feel increasingly sanitised, but should not be surprised that ‘Elle’ is well constructed, controversial and darkly funny.
Isabelle Huppert is in fine form in the lead role as Michéle; never worn down by her experiences – in fact they seem to make the character more honest – Huppert makes the character bitchy, bleakly honest and often hilarious. There is a strong sexual streak to the character, which Huppert has fun with, and a desire to be in control that her violent sexual experiences in the film fulfil. The rest of the cast features Virginie Efira, Christian Berkel, Laurent Lafitte, Alice Isaaz, Anne Consigny, Vimala Pons and Jonas Bloquet who back Huppert up magnificently, perhaps none better than Lafitte who has fun with the light and darker sides of his character.
The screenplay, written for the screen by David Birke and based on the novel ‘Oh…’ by Phillipe Djian, does not shy away from the dark subject matter of the book, but excels in making Michéle strong and rather blunt, with Huppert being given some wonderfully dry lines of dialogue. The subject matter of the film is a difficult one to discuss; after her first assault, it seems that Michéle gains a taste for such violence in her life and actively courts it, making ‘Elle’ controversial to say the least. There is a clear sense that Michéle is written as an unusual woman, and one who responds to violence in a way that many women would not. The murderous father storyline backs this up, but there are plenty of scenes that are dangerous and difficult to watch, even as the film plays up the comedy and frank ridiculousness of Michéle’s life. There are certainly areas of the film that are not clear in depicting Michéle as a woman who desperately needs to be in control, and a lack of emotional involvement from any of the characters in the violence of Michéle’s sexual encounters is worrisome.
Director Paul Verhoeven has coaxed wonderful performances from his cast, that back up the unusual and ridiculous scenario of the film. Tightly paced for the first two acts, the film descends into chaos when certain truths are revealed, and the final 30 minutes feels flabby and drawn out. Verhoeven plays with making the film a thriller, and it could well be if Huppert’s character was not as dry and funny as she is, and this adds to the eerie strangeness of the film. That said, there are plenty of concerning aspects to the film, and ones that feel a little old fashioned in the way they are dealt with. Although the comedy of the film is played up, it is difficult to watch some of the more violent scenes, and even more difficult to laugh at them.
In all, Paul Verhoeven knows exactly what he is doing as he courts controversy in ‘Elle’. There is plenty of debate to be had about the film, and there is much of it that is difficult to watch – even excluding he violent scenes – and in the hands of another actress ‘Elle’ would most certainly have struggled, but Huppert makes Michéle such a ridiculous character that even if you find her sexual choices repugnant – you should – and difficult to watch – again, yep – there is a certain kind of understanding that grows between the character and the audience. Verhoeven has certainly not made violent sexual assault against women something to laugh at in ‘Elle’, but he definitely shows it in a different light.
RATING: 3/5
Review by Brogen Hayes