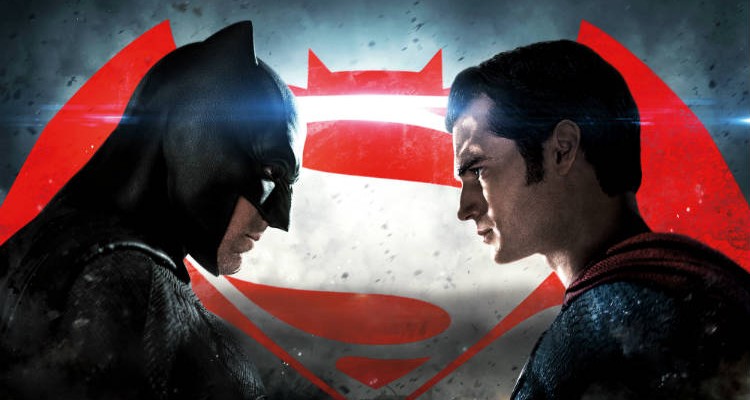 BATMAN V SUPERMAN: DAWN OF JUSTICE (USA/12A/155mins)
Directed by Zack Snyder. Starring Ben Affleck, Henry Cavill, Amy Adams, Jesse Eisenberg, Diane Lane, Laurence Fishburne, Jeremy Irons, Holly Hunter, Gal Gadot, Kevin Costner.
THE PLOT: After a little backstory revealing just how Bruce Wayne became Batman and how Superman is a misunderstood man who fell to earth, we’re introduced to our baddy, Lex Luther (Eisenberg), your average wise-cracking, sweaty-palmed billionaire in sneakers. And, yep, Lex wants to rule the world, by, eh, pitting the world’s two big superheroes against one another. As ace reporter Clark Kent (Cavill) and his partner-in-investigative-journalism Lois Lane (Adams) set about unravelling the clues behind Lex’s evil plot, Wayne (Affleck) is trying to control his vigilante temper as his Batman starts torturing and branding his child-molesting, sex-slave-caging prey. And that’s all just in the first five minutes.
After that, there’s a whole smorgasbord of plot, involving an upright Kentucky congresswoman (Hunter, of course), a mysterious leggy, female Bond (Gadot), old people looking lost (Costner, Fishburne), an alien corpse (nice work, Michael Shannon) and lots of neck-tattooed terrorists in black SUVs. Oh, and a big mutant monster that might represent Donald Trump.
THE VERDICT: Who keeps throwing money at Zach Snyder? The man might just be Hollywood’s greatest franchise killer ever, having nosedived ‘Watchmen’, ‘Legend Of The Guardians: The Owls of Ga’Hoole’ (not even Troy McClure could beat that title), ‘Sucker Punch’ and ‘Man Of Steel’. And now Zack outdoes himself with a two-for-one, making sure both Batman and Superman will have to retreat for a few more years, to regroup and reboot, and be reimagined all over again. Actually, and without giving too much away, he’s pretty much nobbled the hopes and dreams of Wonder Woman too, which the boy is currently filming – for now – and his in-pre-production ‘Justice League’ outings.
There is so much wrong with this movie, it’s hard to know where to start.
To be fair, the cast line-up is a fair warning, being full of faded or failed would-be blockbuster giants, comeback cowboys and embarrassed character actors. Eisenberg’s naturally nervous disposition should work wonders for playing the desperate, nobody-loves-me Lex Luther, but, instead, Jesse seems to be simply channelling Crispin Glover. Badly.
Even the loved ones back home are weak, with Superman supposedly inspired to save the world by Amy Adams teetering uncomfortably in high-heels and Batman relying for his TLC from Jeremy Irons in hemp crocs.
There’s just no one to root here, or even like. There’s no J.K. Simmons. No Christopher Reeves. Heck there isn’t even a George Reeves here, ironically enough.
As for Snyder, once again he delivers a big, hot mess that’s 10% noir and 90% naff.
Ultimately, what you’re left with is far more ‘Mystery Men’ than ‘The Avengers’, the Golden Raspberry-baiting ‘Batman V Superman’ playing like a series of CGI-drenched trailer-chasing shots held together by the feather-flightiest of plots.
RATING: 2/5
Review by Paul Byrne

DISORDER (France | Belgium/15A/98mins)
Directed by Alice Winocour. Starring Matthias Schoenaerts, Diane Kruger, Paul Hamy, Zaïd Errougui-Demonsant, Percy Kemp.
THE PLOT: Soldier Vincent (Matthias Schoenaerts) has returned from active service, but is struggling with hallucinations and paranoia. To earn some extra cash, he takes on a job as private security for a Lebanese man and his wife Jessie (Diane Kruger).
THE VERDICT: Ah, how refreshing to see Matthias Schoenaerts back in the kinds of roles for which he became known; a soldier, not the kind of romantic hero we have seen him play of late. However, although the first half of ‘Disorder’ plays with sound and images to underline the struggles that Vincent is going through, the film doesn’t have enough payoff to justify its running time.
Matthias Schoaenaerts does well in the role of Vincent, obviously relishing the chance to play a character with darker motivations and issues. The trouble is that while Schoaenaerts allows the tension and paranoia of his character to build, the script then never gives him a chance for a decent payoff. Diane Kruger has less to do as the distant, cold and rather bossy housewife that Vincent is sworn to protect. The rest of the cast features Paul Hamy, Percy Kemp and Zaïd Errougui-Demonsant.
Alice Winocaour recently scot to public attention with her work on the screenplay for Mustang – along with Deniz Gamze Ergüven – and ‘Disorder’ is her second feature length work as director. The screenplay for the film was written in collaboration with Jean-Stéphane Bron, and the first half of the film builds nicely; sound – particularly thumping music beats – and images are used to underline the symptoms of Vincent’s illness, as described by a doctor in the opening scenes. The audience quickly learns of Vincent’s loyalty and strength, but once the film turns into more of a domestic drama – as Vincent looks after the family when Jessie’s husband goes away – it suddenly runs out of steam. On the plus side, the audience is never sure whether Vincent is paranoid or vigilant, but on the downside, the climactic payoff, when it finally arrives – is violent and fast, but unsatisfying.
As director, Alice Winocour does well with the scenes where Vincent is in crowded places, allowing his eyes to linger on behaviours that the rest of us may see as innocent but, again, once the film becomes a housebound drama, there is an attempt to build tension, but the film just feels as though it is dragging its heels.
In all, it is great to see Schoenaerts back in the kind of role for which we first got to know him, but ‘Disorder’ runs out of steam in the middle, leaving the film feels flabby and drawn out. Schoaenaerts has never been one to run from a challenging role, but this is one that let him down.
RATING: 3/5
Review by Brogen Hayes

MY BIG FAT GREEK WEDDING 2 (USA/12A/94mins)
Directed by Kirk Jones. Starring Nia Vardalos, John Corbett, Rita Wilson, John Stamos, Michael Constantine.
THE PLOT: With her daughter Paris (Elena Kampouris) off to college, Toula (Nia Vardalos) finds her parents more demanding than ever. When it is discovered, through her father’s desire to prove himself a descendant of Alexander the Great, that her parents were never legally married, it is up to Toula and the family to find a way to make a new Greek wedding happen.
THE VERDICT: ‘My Big Fat Greek Wedding’ was a sleeper hit when it was released 14 years ago, and this new film in the series – which also includes an unsuccessful TV show, ‘My Big Fat Greek’ Life – tries its best to be charming and sweet, but ends up relying heavily on clichés and jokes that don’t work.
The cast of the first film have all returned for this new sequel, including Nia Vardalos, John Corbett, Ian Gomez, Joey Fatone, Michael Constantine, Lainie Kazan and Andrea Martin. New cast members include Elena Kampouris, John Stamos, Rob Riggle and Rita Wilson, who also produced the film. Some cast members do better than others, but on the whole the performances are wooden, highly staged and self conscious.
Screenwriter Nia Vardalos has tried to make lightning strike twice with this sequel to her Oscar nominated film, but this film feels much more cynical than the one that went before it. The jokes are filled with clichés, and there is only so much bickering between the family that the audience can take before it begins to grate. As well as this, the story doesn’t feel all that fresh – especially considering the first film – and the idea that those that move to America become more attached to their culture than the ones that stay home has been covered before, and much more subtly – stand up, ‘Brooklyn’! As well as this, the film feels like a series of jokes strung together, with ideas brought in and quickly dropped once the laugh has been squeezed from it.
As director, Kirk Jones – whose last film was ‘What to Expect When You’re Expecting’ in 2012 – keeps the film rattling at a decent pace, but ups the ante for the family scenes, making the film feel like a caricature of a Greek family, rather than the true observation of one. The jokes don’t land, characters are belittled and the warmth and charm of the first film simply is not there.
In all, ‘My Big Fat Greek Wedding 2’ is a film made for an incredibly specific audience, and one that does not work. Storylines are shoehorned in for the sake of drama, most of the performances are wooden and overdone, and the jokes simply do not work.
RATING: 1/5
Review by Brogen Hayes

THE CLUB (Chile/TBC/98mins)
Directed by Pablo Larraín. Starring Alfredo Castro, Roberto Farías, Antonia Zegers, Marcelo Alonso, Jaime Vadell.
THE PLOT: In a small Chilean seaside town, four men and a woman live together in a secluded house. The men race their pet greyhound and the woman tends to their needs. When a newcomer arrives it is revealed that all the members of the house are disgraced members of the Catholic Church, hidden away from public view, but the presence – and sudden absence – of the new priest in the house shines a spotlight on the occupants of the house, one that threatens their way of life.
THE VERDICT: ‘The Club’ is director Pablo Larraín’s forst feature film since 2012’s ‘No’, and once again the director shines a light on an uncomfortable part of Chile’s history and present. The Club is far less straightforward that the director’s previous films, and the message about the Catholic Church becomes tangled in with troubled characters whose arcs are unsatisfying.
The cast that Larraín has assembled do their best with what they are give, with regular contributor Alfredo Castro standing out as a priest sent away because of allegations of child sexual abuse. Roberto Farías, Antonia Zegers, Marcelo Alonso, Jaime Vadell, Alejandro Goic, Alejandro Sieveking, josé Soza and Fransisco Reyes and the rest of the cast back Castro up incredibly well, lending depth and weight to this strange, isolated world, but they are all let down by a vague and often rambling story.
Pablo Larraín has created a film that tries to make a statement about the Catholic Church and their handling of scandals, keeping those guilty within the confines of the Church and hiding them away, rather than turning them over to the authorities. It is clear that Larraín is trying to show how unsatisfactory and damaging this is for the victims of these clergy, but the screenplay also attempts to show those damned by the story in a more sympathetic light, meaning these characters don’t always feel like they belong in the same world. As well as this, the final act and the resolution of the story are little more than ludicrous.
As director, Pablo Larraín has coaxed wonderful performances from his actors, be they playing characters in denial or those who have simply forgotten why they have ended up where they are. The trouble is that the film is drawn out and badly paced – after an explosive opening act – and the final act feels rushed and it undermines the rest of the film. As well as this, the cinematography of the film is strange; swinging from hauntingly beautiful to looking as though it was filmed on a Nokia phone from the early 2000s.
In all, ‘The Club’ is inspired by a story that is universal and terrifying in some respects, and certainly needed to be told, but the message gets lost in a cast of characters that don’t always feel like they are in the same film as one another. The idea behind the film and the performances are strong – if uneven – but the cinematography swings between beautiful and cheap, and the cast are let down by a story that feels unresolved and unsatisfying. Of course, since it seems the victims of these people didn’t get their closure, it could be that Larraín planned this all along.
RATING: 2/5
Review by Brogen Hayes