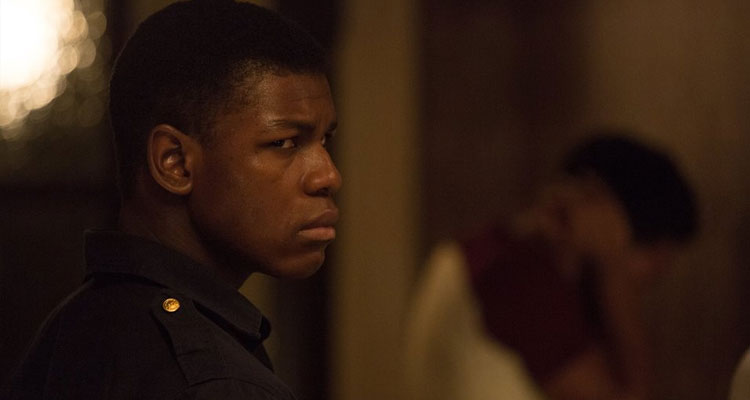 DETROIT (USA/15A/143 mins)
Directed by Kathryn Bigelow. Starring John Boyega, Will Poulter, Algee Smith, Hannah Murray, Kaitlyn Dever, Jack Reynor, Anthony Mackie.
THE PLOT: Detroit, 1967. The city is on fire both emotionally and literally, as riots have spread among African-American communities. These urban communities have been left to their own devices after white people have moved out. The white police force used naked brutality to keep the African-American communities under control. But chaos reigns and nightly curfews have been enforced. The epicentre of this conflict will soon be the Algiers Motel, where Motown band leader Larry (Algee Smith) is holed up for the night with his band, along with two white girls, Julie (Hannah Murray) and Karen (Kaitlyn Dever). Security guard Dismukes (John Boyega) joins cops Krauss (Will Poulter) and Demens (Jack Reynor) when shots are fired from the motel. Believing it to be a sniper, Krauss and the others storm into the motel and start interrogating the guests. Then Krauss pushes things further and stretches the definition of a lawman…
THE VERDICT: Kathryn Bigelow is an interesting choice of director for ‘Detroit’. A socially-conscious film about racism and police brutality would be a more obvious choice for someone like Spike Lee or John Singleton. However, Bigelow gives her (mostly) fact-based story a growing sense of urgency and timely relevance. With the Black Lives Matter movement still very much in the headlines, this is as much a story of now as it is of then. However, is it all that it seems?
There’s no denying that Bigelow’s film is a powerful, incendiary piece of filmmaking. It’s shot almost documentary-style, intercutting newsreel footage of the riots with her own. Then she amps up the sweat, tension and moral ambiguity when things go south very quickly at the motel. Civilian lives are put at risk by the very force designed to protect them, but the ugly spectre of racism soon arises. Bigelow’s direction is strong here, collaborating again with her ‘Zero Dark Thirty’ and ‘The Hurt Locker’ screenwriter Mark Boal. She captures the fear that these trigger-happy cops induce, but also underscores the tragic consequences of their actions.
What undermines this, though not fatally, is the fact that the story isn’t really finished, even after 50 years. The pain is buried deep within Detroit’s past, in a city unwilling to say sorry for what happened that tragic night. Part of the problem here is that Boal’s script is pieced together from eyewitness accounts, rather than definitive, watertight testimony. Some events have been fictionalised for dramatic purposes. If you’re looking for that eureka moment at the end, when the real truth will finally burst out, it’s not really there. Bigelow doesn’t hide this, but it does raise questions over her choice of narrative delivery. Why dramatise this and be slightly hamstrung when the documentary format would be more appropriate?
All the same, ‘Detroit’ is a highly commendable piece of filmmaking. It’s well-acted by a large ensemble cast, who all get reasonable amounts of time to sell their characters’ motivations. The intense Poulter adds layers of complexity to his racist cop, Smith makes a convincing frightened civilian, while Boyega is the voice of reason but is somewhat muted by the events that unfold. It’s a typically muscular piece of filmmaking from Bigelow that raises more questions than answers. But if that gets people talking, then it can only be a good thing. Maybe future generations will heal Detroit’s wounds. Recommended.
RATING: 3.5 / 5
Review by Gareth O’Connor

AMERICAN MADE (USA/15A/115 mins)
Directed by Doug Liman. Starring Tom Cruise, Domhnall Gleeson, Sarah Wright, Caleb Landry Jones, Jesse Plemons.
THE PLOT: Civilian aircraft pilot Barry Seal (Tom Cruise) has a line going smuggling Cuban cigars into the US. He’s caught by CIA Agent Schafer (Domhnall Gleeson). Instead of jail time, Barry is recruited into the CIA as a covert pilot. Flying low over South American countries, he takes photos of insurgents and military camps. All of this is unknown to his wife Lucy (Sarah Wright) and his children. Schafer moves him to a sleepy Arkansas town, where Barry’s operations expand. His actions draw the attention of the infamous Medellin cartel in Colombia. Barry is soon diverting AK-47s to Colombia rather than Nicaragua and assisting in drug smuggling into the US. He’s wanted by everyone, but his wealth and fame make him untouchable. Then things get really complicated…
THE VERDICT: After his economically-made but inventive indie ‘The Wall’, Doug Liman returns to mainstream filmmaking with ‘American Made’. Re-teaming with Tom Cruise, Liman’s latest is based on a true story. It would have to be a true story (of sorts) to be in any way credible. For this is a mind-boggling, multi-strand story that just couldn’t be made up. Truth is certainly stranger than fiction. Writer Gary Spinelli plays up the Tony Montana-style myth of the ‘American Dream’ here, but makes Barry’s commitment to his family a priority too.
Barry Seal was something else. A cocky and supremely confident man who laughed danger in the face, he found himself in some pretty hairy situations, playing different sides (CIA, DEA, FBI) off each other. He had so much money that he ran out of space at home to hide it – which is the butt of a number of jokes. It’s a role that is clearly tailor-made for Cruise, his innate charm and movie-star quality making the character funny and engaging. It’s a much better fit for him than ‘The Mummy’, in which he was miscast. As the plot twists and turns like crazy, Cruise anchors it all and manages to keep Barry grounded even in the most unlikely of situations.
It’s a bright and breezy caper, but that comes at a narrative cost. There’s little attempt to dig deeper into Barry’s psyche. In this telling at least, he seemed to say yes to everything asked of him without ever questioning it or seriously pondering the risks to himself and his family. That’s not so much Cruise’s fault – it’s more Spinelli’s. For such a colourful character, the script is surprisingly light on what made Barry tick. Maybe it was the money, the fame, the rush of adrenaline, the power trip… Maybe he was just a small cog in a large machine that kept changing direction. The script never really settles on what exactly. It may lack some substance, but it’s an enjoyable film that boggles the mind as much as it entertains.
RATING: 3 / 5
Review by Gareth O’Connor

THE PLOT : The Logan’s are a blue-collar family from the hills of West Virginia, and their clan has been famous for its bad luck for nearly 90 years. But the conniving Jimmy Logan (Channing Tatum) decides it’s time to turn the family’s luck around, and with a little help from his friends, the Redneck Robbers, he plans to steal $14 million from the Charlotte Motor Speedway on the busiest race day of the year.
A heist movie with a difference: Steven Soderbergh, the director of the Ocean’s Eleven trilogy and an A-list cast including Channing Tatum, Daniel Craig and Adam Driver deliver a smart, thrilling and funny blue-collar story of an audacious multi-million dollar robbery.

THE VERDICT
Retirement from feature filmmaking doesn’t seem to suit Steven Soderbergh. He got bored of it, so we can be thankful that he’s picked up the megaphone again. Logan Lucky is anything but boring. It’s a typically well-crafted, good-humoured heist caper from a witty script by Rebecca Blunt. Think of it as a low-rent Ocean’s Eleven, populated by ordinary joes who are basically good country folk dreaming of a better life for their families. Channing Tatum is ideally cast here as the everyman with a plan, with Adam Driver providing strong support as his one-armed and possibly half-brained brother. The wild card here is Daniel Craig’s dim-bulb convict who thinks everyone else is stupid. It’s a rib-tickling performance from the usually intense actor. Soderbergh directs with a light touch, clearly having as much fun as the audience will (a scene involving a missing arm is a hoot). Welcome back Mr Soderbergh. We missed you.