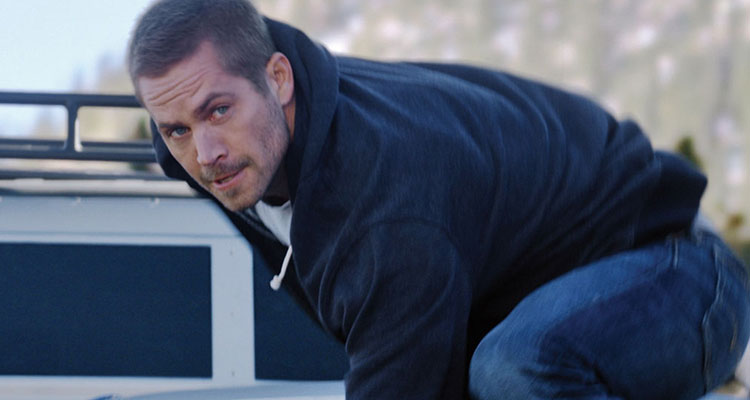 We review this week’s new cinema releases, including FAST & FURIOUS 7, WHILE WE’RE YOUNG and THE WATER DIVINER…

FAST & FURIOUS 7 (Japan | USA/12A/137mins)
Directed by James Wan. Starring Vin Diesel, Paul Walker, Dwayne Johnson, Micelle Rodriguez, Kurt Russell, Tyrese Gibson, Ludacris.
THE PLOT: After his brother was critically injured in FAST 7 FURIOUS 6, his brother Deckard (Jason Statham) swears revenge against Dominic Toretto (Vin Diesel) and his friends. Meanwhile, the gang are recruited to rescue Ramsey (Nathalie Emmanuel), a hacker, from terrorists, and recover a device that can track people around the world.
THE VERDICT: Once upon a very long time ago, the FAST & FURIOUS movies were set in a world that mostly resembled ours. Now, with the seventh instalment in the franchise however, the series is firmly set in a reality where the laws of physics don’t apply… Sort of like the Classic Bond movies of the late 1970s.
The good news is that FAST & FURIOUS 7 makes no attempt to change the formula that has worked for the franchise all these years, so the film is chock full of terrible, laughable, expository dialogue, car chases and set pieces that defy the laws of gravity and science, and high octane silliness that would not work anywhere else.
The performances in the film are what you would expect if you have ever seen a FAST & FURIOUS film before; everyone driving fast and cracking wise in order the save the day. Chris Morgan’s screenplay errs on the side of the fantastical, causing cars to be jumped between hotel towers, parachuted out of planes and driven at airborne helicopters. As mentioned, the dialogue is laughably clichéd and trite, but somehow this doesn’t detract from the film too much.
Director James Wan makes FAST & FURIOUS 7 a combination of Sexpolitation, Carsploitation and CGIsploitation. This works most of the time, but there are times when the audience can’t help but wonder if background girls need to be half naked for scenes to work. On the positive side, the pacing is steady, and there is just enough balance between the set pieces and the overly sentimentalised loyalty to keep the film moving. The final 10 minutes pay tribute to the late Paul Walker – this is his final film – a choice which will probably delight fans, but changes the tone of the whole film.
In all, FAST & FURIOUS 7 is exactly what we have come to expect from this franchise; big dumb fun with a little bit of sexism and some Carsploitation thrown in. The dialogue is hokey but the set pieces are fun, and Dwayne Johnson removing a cast by simply flexing is a moment of comic brilliance.
RATING: 3/5
Review by Brogen Hayes

WHILE WE’RE YOUNG (USA/16/97mins)
Directed by Noah Baumbach. Starring Ben Stiller, Naomi Watts, Adam Driver, Amanda Seyfried, Charles Grodin, Mria Dizzia, Adam Horovitz, Matthew Maher, Peter Yarrow.
THE PLOT: Fortysomething documentary filmmakers Josh (Stiller) and Cornella (Watts) have hit something of a wall, both in their careers (Josh has been working on one film for the last eight years) and in their home lives. So, when the former bumps into hipster twentysomething couple Jamie (Driver) and Darby (Seyfried), and they rave about his work (especially the early films, of course), he’s more than ready to bask in their admiration and youthful lust for life. Cornella’s not quite so sure about their new best friends though, and keeps herself busy with helping her noted documentarian father, Leslie (Grodin), whilst Josh throws himself into helping Jamie’s new documentary come together…
THE VERDICT: Could Noah Baumbach finally be easy up on the misery for his latest, no doubt semi-autobiographical work? Having hit something of a career peak with 2005’s THE SQUID AND THE WHALE, Jennifer Jason Leigh’s hubby has been steadily slipping down a black hole with his movies ever since. Offerings such as MARGOT AT THE WEDDING (2007) and FRANCES HA (2012) had room for very little happiness, and any light present tended to be fueled by delusion. Here, though, Baumbach has managed to put his tongue back in his cheek as he delivers a few more ugly truths about families, and friends, and that tidal wave known as the mid-life crisis.
Stiller (currently rebranding himself as a character actor, even as he prepares to unleash his lucrative little Burgundy, supermodel Derek Zoolander) and Watts are a perfect fit here, both bringing an after-the-party weight on their shoulders, whilst Driver and Seyfried are just about where their shark-in-Oxfam-clothing shiny young couple should be. It’s just good to see some sweet back in with the bitter.
RATING: 3/5
Review by Paul Byrne

THE WATER DIVINER (Australia | Turkey | USA/15A/111mins)
Directed by Russell Crowe. Starring Russell Crowe, Olga Kurylenko, Jai Courtney,Isabel Lucas, Cem Yilmaz.
THE PLOT: After the death of his wife, Joshua Connor (Russell Crowe) an Australian water diviner, travels to Turkey to find out what happened to his three sons who, it is presumed, died in the Battle of Gallipoli in 1915.
THE VERDICT: THE WATER DIVINER is Russell Crowe’s directorial debut, but feels as though it is directed by a steady and seasoned hand. There is an old feel about the film, as though it was created in a different era, but Crowe takes a tale that could easily be over-sentimentalised, and makes it his own.
Crowe himself is strong in the leading role, as a heartbroken yet stubborn man who will do anything it takes to find the truth. There is also an element of otherworldliness to the character; this is a man who divines for a water, so surely is in tune with the rhythms of the earth. Olga Kurylenko is surprisingly stiff and uneasy in a role that she should be able to with her eyes closed. Yes, she is beautiful on screen, but her character Ayshe is lacking a spark and a feel of naturalism. Dylan Georgiades, as the confident and cheeky Orhan, breathes innocence and fun into a film that could easily have been bogged down with grief and despair. The rest of the cast is made up of Isabel Lucas, Jai Courtney, Damon Herriman, Jacqueline McKenzie, Cem Yilmaz and Yilmaz Erdogan.
The story, written by Andrew Knight and Andrew Anastasios is based on true events from World War I, but by throwing a grieving father into Turkey, which is still war torn and distrustful of strangers, creates the tale of natural enemies becoming friends, and calls up the old idea hat books should certainly not be judged by their covers. There are moments, however, where everything is tied up in neat little bows; bows that feel entirely too contrived, cheesy and convenient. This in turn feels like a disservice to the characters.
As director, Russell Crowe does his job confidently and capably, capturing the look and feel of Istanbul in the aftermath of World War I, and coaxing steady performances from his actors – with the exception of Kurylenko. Emotional and affecting moments are allowed the land gently and linger, while there is enough warmth and heart to keep the audience fortified against the scenes of war. There is a delicate balance here, one that Crowe just about manages to strike.
In all, THE WATER DIVINER is a romantic, sweet and engaging tale, which errs on the side of cheesy from time to time. Crowe gives his best performance in many a year, but is let down by Kurylenko, who feels out of place and uncomfortable on screen. As well as this, everything feels a little convenient in the end, but there is a warm and affecting heart at the centre of THE WATER DIVINER, even if it takes a while to find it.
RATING: 3/5
Review by Brogen Hayes

ALTMAN (USA/IFI/96mins)
Directed by Ron Mann. Starring Julianne Moore, Robin Williams, Elliot Gould, Lily Tomlin, James Caan, Paul Thomas Anderson, Lyle Lovett, Kathryn Reed, Bruce Willis.
THE PLOT: Charting the life and career of the late filmmaker Robert Altman, we first jump back to the Kansas native’s early years, serving with a bomber squadron the Pacific. Back in the US of A, the young Altman unsuccessfully tries to forge a career in Hollywood, returning to Kansas, where he finds work make industrial films for the Calvin Company. His 1957 film DELINQUENTS catches the eye of Alfred Hitchcock though, and Altman soon finds himself achieving success on television. It’s here that he will meet his future wife, Kathryn Reed, and it proves to be his road into feature films, Altman finally scoring with 1970’s M*A*S*H. The critical faves (such as 1973’s THE LONG GOODBYE and 1975’s NASHVILLE) soon followed, Altman subsequently setting up his own production company, Lion’s Gate, before promptly suffering a string of flops (most notably 1980’s POPEYE). But the hits would finally come for this acclaimed auteur and true survivor, including 1992’s THE PLAYER, 1993’s SHORT CUTS and 2001’s GOSFORD PARK.
THE VERDICT: A documentary that sets out to dispel a few myths about the late, great Robert Altman (who passed away in 2006), from the start here it’s clear that noted filmmaker Ron Mann has come here to praise not condemn the man. With the blessing of Altman’s widow (Reed going so far as to handling much of the narration duties here), Altman is a film that tries to make an easy chronological narrative out of its subject’s life. Something Altman himself tended to avoid in his films, but there’s a joy to be had in the series of rises and falls, in the unearthed gems from the archives, and from the home movie footage (particularly of a bare-assed Altman dancing in Paris).
Mann doesn’t set out to make any great claims about Altman, instead letting the work, and those who worked with the man, build up a picture in the viewer’s mind. Altman would have been happy with this documentary. If a little bored, of course.
RATING: 3/5
Review by Paul Byrne

MOVIES.IE’S ONE TO WATCH!
I USED TO LIVE HERE (Ireland/15A/80mins)
Directed by Frank Berry. Starring Jordanne Jones, Dafhyd Flynn, James Kelly, Ross Geraghty, Nikita Rowley, Ross Kelly, Ken Doyle, Laura O’Connor.
THE PLOT: When we first meet 13-year-old Dubliner Amy Keane (Jones), she’s on a motorway flyover, staring into the late evening traffic below, stepping back from the edge as the tears take over, sinking to the pavement as she gets her dad’s voicemail. Jump back to Saturday, on Amy’s sleepy, slightly rundown Dublin housing estate, amongst the rolling hills, everyone’s quietly struggling, quietly getting on with a life considerably less than extraordinary. Amy’s best friend, Dylan (Flynn), has secretly dropped out of school, believing he’ll make it as the new Dr. Dre one fine day, whilst her hardworking mechanic father (Kelly) finds the good life he’s been trying to build for his daughter since her mother died is in danger of collapsing when an ex-girlfriend, Dina (Ayres), turns up with a 13-month-old son she thinks might be his.
Death is all around though, from Amy’s late mother to the recent suicide of a friend, with a mural on the estate dedicated to all those who have passed. As the week progresses, and Dina moves in, Amy finds her anger and frustration growing…
THE VERDICT: Inspired by two newspaper articles by Dr. Tony Bates, CEO and founding director of Headstrong, the National Centre for Youth Mental Health, I USED TO LIVE HERE was shot with a largely non-professional cast by noted Irish documentary filmmaker Frank Berry (BALLYMUN LULLABY, TEENAGE CICS). Having originally toyed with the idea of a documentary feature examining suicide amongst Irish teenagers, Berry came to the belief that a more powerful medium would be a fiction feature. And he would appear to be right, blessed with a cast who ring true, and a script that is far more Dardenne brothers than a Prime Time special. What’s most admirable about I USED TO LIVE HERE is that it takes its time, and it never tries to hard. Which is probably why it plays so beautifully.
RATING: 4/5
Review by Paul Byrne