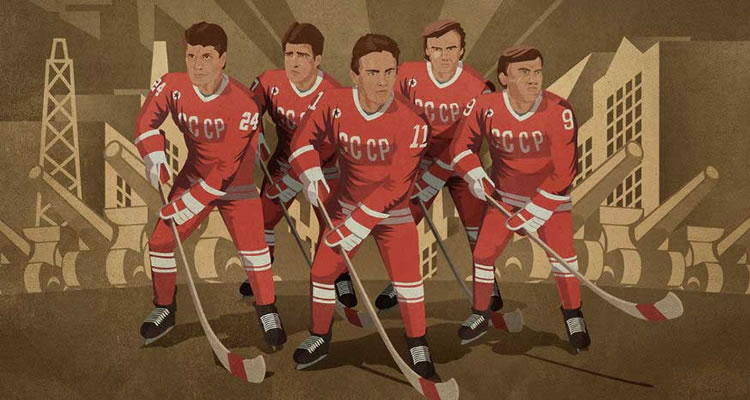 RED ARMY (USA/Russia/12A/84mins)
Directed by Gabe Polsky. Starring Slava Fetisov, Viktor Tikhonov, Anatoli Tarasov.
THE PLOT: Charing the rise and fall of the Soviet Union’s legendary Red Army ice hockey team, as filmmaker Gabe Polsky talks to former players, journalists and a former KGB employee, we get to see those early breakthrough years, as coach Anatoli Tarasov creates a winning team. We also see how important the team was to Stalin, and how the sport itself came to regarded as the national sport by the Soviet people. The glory years were truly glorious on the ice, even if life off the ice wasn’t quite so rosy. Perhaps unsurprisingly, by the 1990s, the star players started to find the lure of the Yankee dollar a little too great…
THE VERDICT: After the inevitable montage of newsreel footage reminds us all how America and Russia have never been quite the best of buddies, Gabe Polsky’s exploration of just why and how the Soviet Union dominated ice hockey on the world stage for so long seems to get off to a shaky start when an insistent line of questioning as Red Army icon Slava Fetisov concentrates instead on finishing a text ends with a middle-finger from the interviewee. A stereotypical Russian, or a stereotypical American? Turns out, thankfully, these guys are friends, Polsky, the son of Russian immigrants, having played ice hockey for Yale.
From there, we go deep inside the history of that Red Army, Stalin believing that the country’s hockey team would represent Soviet Superiority. Which meant they would have to kick America’s ass. Again and again. And again.
The interviews reveal as much about life in Russia at the time as it does the US/USSR rivalry and the sheer brilliance of the Red Army. Much of the latter was down to coach Anatoli Tarasov, a quiet genius of the game who was smart enough to include advice from chess grandmaster Anatoly Karpov and exercises from the Bolshoi dancers. It makes for a thrilling ride, not only through the glorious skill on display, but all that other dumb stuff that surrounds sports. Like, you know, politics, glory, celebrities.
RATING: 4/5
Review by Paul Byrne