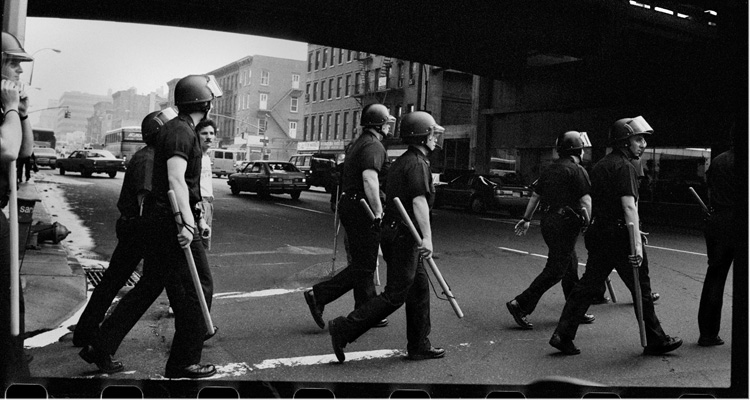 PRECINCT SEVEN FIVE (USA/Club/104mins)
Directed by Tiller Russell. Starring Michael Dowd, Ken Eurell, Walter Yurkiw, Chickie, Dori Eurell.
THE PLOT: It’s New York, 1982, broken glass, everywhere, people pissing on the stairs, and it would seem that quite a few New York cops just don’t care. Especially those working the five-mile square that was the Seven Five precinct. Where most see poverty, depravation and despair, those with an eye for a killing – both literally and metaphorically – see dollar signs. None moreso than NYPD officer Michael Dowd, a cop just about as corrupt as they come.
We first see Michael Dowd as he testifies before a commission investigating police corruption, shortly after he was busted in 1992. Down casually reveals the grisly details behind his ten years of living off the fat of drug-dealing, embezzlement, burglaries, extortion, and anything else that might bring in an extra few hundred dollars here and there. Having begun serving in East Brooklyn’s 75th precinct in 1982, Dowd quickly singled himself out as fearless when it came to abusing his power as a New York cop, his crooked ways helped by the fact that crime in New York at that time was rampant. It all began with a €200 traffic violation bribe, and it didn’t take long before Dowd and his initially reluctant partner-in-crime-promotion Kenny Eurell were working directly for drug lord Adam Diaz, offering the latter not only protection but helping him squeeze out the competition too.
As we work our way through that decade of crime and the inevitable drug-fuelled downfall, both Dowd and Eurell look back on their incredible rise and their inevitable fall…
THE VERDICT: Try to imagine GOODFELLAS’ Henry Hill having spent his life working for the New York Police Department, and you’ll get some idea of what The Seven Five is all about.
Michael Dowd was dubbed “the most corrupt cop ever”, and just like Hill, today, the guy sports a wry smile, being pretty damn proud of his dark and dirty past. You can see why the camera loves the guy though, Hollywood having long fed us great stories of power and corruption amongst the criminal fraternity. And Dowd’s story is pure Hollywood, the kind of wacks-and-all true-life tale that could win any half-decent actor an Oscar.
Director Tiller Russell keeps it simple, interviewing many of the key players as this remarkable story unfolds, much of the latter-half of Dowd’s crime spree playing like Henry Hill’s last day as a free man – the seemingly mundane details of these increasingly dirty deeds slowly giving way to that wave of paranoia and encroaching judgement. Thrilling and chilling, PRECINCT SEVEN FIVE would give Martin Scorsese a major hard-on.
RATING: 5/5
Review by Paul Byrne